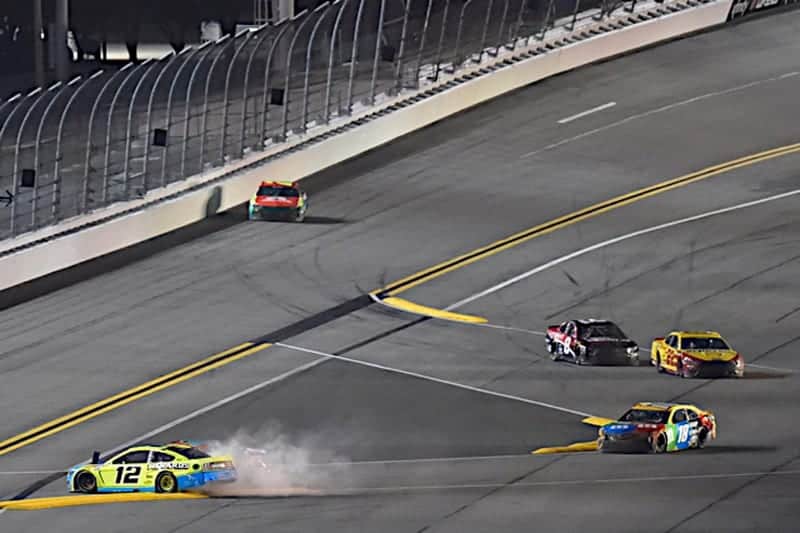 For the first time ever, the Busch Clash was held on the Daytona International Speedway road course, and it did not disappoint. In a race that saw lockups, spins, a caution for dirt and even a fire, the end delivered in perhaps the most unexpected way.

On fresher tires, pole sitter Ryan Blaney passed Chase Elliott with three laps to go. However, Elliott did not go away. Turn after turn, stretch after stretch and chicane after chicane, the two faces of the NASCAR Cup Series youth movement went to battle for bragging rights and a trophy in the inaugural event.

With one to go, Elliott knew he had to go for it. After a strong backstretch bus stop and NASCAR turns 3 and 4, Elliott had one final shot to pass the Team Penske driver. Coming to the frontstretch chicane, Elliott threw his car into the turn alongside Blaney. As Blaney’s car came down to protect, Elliott hit a bump and collided with his best friend.

They call it The Clash for a reason. pic.twitter.com/cVl4LG2BcJ

The contact sent Blaney and his hopes of winning into the wall. Not only were Blaney’s chances dashed, but the loss of momentum hindered Elliott enough for Kyle Busch to sneak by coming to the start/finish line for the win.

“I was close enough to drive it in there and … yeah, I feel like I’d be mad at myself for not at least trying. Obviously, I don’t mean to wreck anybody much, especially him,” Elliott told FOX Sports after the race. “… I felt like you’ve got to go for it here in an event like this … We had a fast Llumar Chevrolet in a position to have a shot at it, so we’ll try again Sunday.”

For Blaney, it was another victory within his sights that disappeared, whether exhibition or not. After overdriving the first turn from the lead early in the race, Blaney used several pit stop strategies to have a shot. Ultimately, the fresh tires were the right call that nearly landed him the win. Unfortunately, it ended up in smoke.

“We were just racing hard, and I had a little bit fresher tires there,” Blaney told FOX Sports following the race. “We saved a set and got back to second there, and this car was really good. I kind of tried to protect, and I drove into the last corner really deep to try and make sure I didn’t get dive-bombed like that, and we just came together there … Learned something for next weekend, and I’m excited to get the [Daytona] 500 going this weekend.”

Still friends but frustrated. Comments from both drivers.

Chase Elliott: “If I’m sorry about trying to win the race, I’m in the wrong business.”

Ryan Blaney: “Of course he didn’t mean to do that, but I ended up wrecked.” pic.twitter.com/HP1pDuD1pZ

It is no secret that Blaney and Elliott are great friends off the track. But in a moment like tonight when a win is on the line, friendships, teammates and hesitation go out the window. Blaney was the first to congratulate Elliott after his title triumph three months ago. Three months later, they both found themselves dueling it out for the win and coming up short.

Let me first off by saying that is racing. With that said when other drivers do what the silver spooned NASCAR favorite does it, crickets and excuses. When a few other drivers do it, the villagers take their pitchforks, torches and social media and BURN the offender into hateful oblivion! Ah, NASCAR fanatics. HYPOCRITES!

I thought the race was another desperate NASCAR gimmick…dirt and all. It was boring, imo.

That damn Chase Elliott, he should be hung from the highest tree and executed.
Then NASCAR should suspend him for life and then penalize him 20 points for good measure.
Where’s my damn pitchfork?

I never did like chicanes, unless they are 60 feet wide all the way through and shaped like a big S. A chicane before the start finish line is a gimmick.