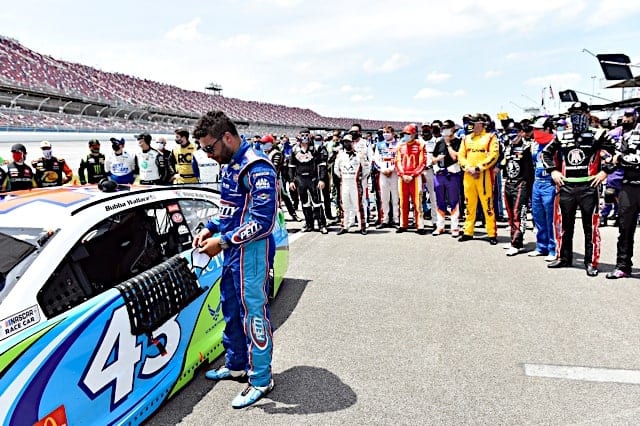 Did You Notice?… NASCAR is in position to grow exponentially as the 2021 season dawns, sitting four days before its biggest race, the Daytona 500.

After an off-track push for new investors, racial justice and unity, the question is whether people with very different opinions can come together, embracing change as the sport reaches a fork in the road on its future.

In a world that sometimes feels like an alternative reality these days, it’s hard to understand the difference a year makes in this sport. Last February, a crowd of 100,000 descended on Daytona International Speedway to watch now-former President Donald Trump give a pre-race speech. He drove around in his limo while both Trump 2020 and Confederate flags flew all over the infield. Thousands of fans spread out across the grass, enjoying the pre-race concert and interacting with drivers while COVID-19 was just, you know, some weird disease China was dealing with.

Daytona politician invited Donald Trump to #DAYTONA500 three weeks ago, after talking to @NASCAR about how long it had been since a president attended.

– "This is going to be a big Trump rally with a race."

The Great American Race itself was delayed a day by rain, then consumed by safety concerns when potential winner Ryan Newman averted near-tragedy when his No. 6 Ford crossed the finish line sitting on his roof, a fiery mess. Remember that? Those who attended will never forget as the sport narrowly avoided its first death since Dale Earnhardt there in 2001.

Twelve months later, Newman is back for redemption, but 75,000 seats will sit empty as COVID-19 continues to rage across the nation. All the Confederate flags are gone, banned forever as a sport that once supported segregationist George Wallace made a hard left turn toward racial justice last summer. What was supposed to be the debut of a make-or-break NextGen car instead becomes the curtain rising on a new breed of diversified NASCAR ownership — Michael Jordan and Pitbull, to name a few.

However, those political statements remain untested during a time where profit margins didn’t include fans partying in the infield each weekend. Restrictions should dog the sport throughout the year, mask-wearing a priority along with protecting athletes as NASCAR hopes to keep weathering the storm of this pandemic. Finishing its year on time following a two-month delay was a major accomplishment still worth noting. There were just two positive tests, neither causing serious illness, in its 30-plus cast of Cup regulars as the sport keeps garage passes limited and protecting them a top priority.

Their 2020 effort produced a 2021 financial reward in a COVID-19 economy known as survival. The sport sits pretty after simply maintaining TV viewership, the new success story in a sports world that’s hurting. With even the Super Bowl producing its smallest Nielsen rating in 52 years, it’s hard to steal attention when a nation has much more on its mind.

Race teams remain solvent, several benefiting from Paycheck Protection Program loans to keep them afloat. The end result is a healthy field of 36 charters, 44 entries for the 500 and an overflowing number of NASCAR Xfinity and Camping World Truck series efforts looking to contest a full season. Cost-saving measures like no practice and qualifying at many tracks have made it easier for people to jump over economic hurdles and try this puppy out.

There’s also a new audience in the making, ready to ingest the racing if it can retain the strong competition we saw throughout much of 2020. Jordan combines with Bubba Wallace to create the strongest minority owner/driver combination ever put out on the Cup level. Partnering with Denny Hamlin and Toyota, 23XI Racing provides Wallace no more excuses for untapped potential.

Another new team, Trackhouse Racing Team, is manned by Mexico native Daniel Suarez and has a specific off-track program designed for urban communities. Its success, according to owner Justin Marks, will be defined as much by how they transcend the current NASCAR fan base as its 2021 results before the NextGen car.

Indeed, talks with former NASCAR owners off the record showcase a growing interest in buying those guaranteed spots in the field. Five years into the charter program, we’re nowhere close to the $1.2 billion it cost to buy the Miami Marlins but higher than the $6 million pittance Barney Visser got for Furniture Row Racing’s points just three years ago. Floyd Mayweather is the most visible investor yet to cash in, but others are poking their heads around, intrigued by current NASCAR President Steve Phelps’ noted change in direction.

However, Phelps’ opinions are not universal; the reality NASCAR seeks does not exist in a vacuum. There are fans who have responded to the Confederate flag ban by leaving the sport and never coming back. Trump’s vigilance against the sport stifled its momentum, throwing it into the dangerous world of political viewpoints mixed with entertainment. The stance from the sport appears to be good riddance: it’s yet to be seen, though, if a new breed of fans will fill the stands and spend enough to replace them. And what about those who take a stand? Will NASCAR throw out every fan waving the flag?

Let’s also note one of the top drivers, Kyle Larson, was fired from Chip Ganassi Racing in April by saying a racial slur in a public forum. His reward? To get an even better ride with the New York Yankees of NASCAR, Hendrick Motorsports, after a months-long rehabilitation and apology tour.

As for COVID-19? How NASCAR handles its top-tier series seems to differ greatly from the grassroots, short track world where this virus sometimes feels nonexistent. A sport at its best when drivers work into a Cup ride from the ground up, not from their rich families’ play money, often takes an opposite stance with the minors on how to approach the virus. This example from last fall from the World of Outlaws is the norm, not the exception, and hypocrisy will grow, challenging progress if mask-less, lower-sanctioned NASCAR races become well publicized. Already-strained relationships could push others in the direction of investing elsewhere, as SRX already adds its name to the racing landscape this summer.

As for the new owners, from Jordan on down, interest in the sport will wane if there’s on-track failure. Can they succeed when 42% of the charters are owned by five men in Joe Gibbs (Toyota), Rick Hendrick (Chevrolet), Tony Stewart/Gene Haas (Ford) and Roger Penske (Ford)? Can an aging ownership base and three powerful manufacturers give ground in the name of NASCAR’s competitive future? Buying a piece of their pie won’t be cheap. Getting them to stop spending exorbitant amounts of money in the name of NextGen research is going to take convincing.

At stake is the future of a sport on the verge of larger defining financial considerations: a new TV contract (it runs out in 2024) and large-scale renovations or shutdowns of cookie-cutter tracks. A new schedule with plenty of road courses, some not owned by the sport’s track arm, International Speedway Corporation, costs NASCAR money. Chicagoland Speedway and Iowa Speedway, once the keys to the future, sit dormant on the NASCAR front, rumors of permanent shutdown rampant. Auto Club Speedway’s transition to a short track could be the tip of the iceberg, but reconfiguration isn’t cheap; long-term investment must be backed with factual proof the fans will still come.

The words of that January poet Amanda Gorman, ever-present during a presidential inauguration, seem to mean more in the NASCAR world entering 2021 than they ever will. The challenge of unity in the face of future growth isn’t constrained to the divisions we see in our neighborhoods or the halls of Washington, D.C.

“The stance from the sport appears to be good riddance: it’s yet to be seen, though, if a new breed of fans will fill the stands and spend enough to replace them. And what about those who take a stand? Will NASCAR throw out every fan waving the flag?” Long term fans have many years experience already with NASCAR’s “good riddance” stance. As for the white unicorn “replacement new breed” – I’d say we’ve already seen whether that plan works – but would be happy to take a bet on it if you are in doubt. I’ll give very generous odds.

Fans “taking a stand”? What, exactly, are standing for when you wave a flag that is a symbol of racism and sedition?

You’re so right. Someone needed to say it. That’s all the BLM signage, in a nutshell.