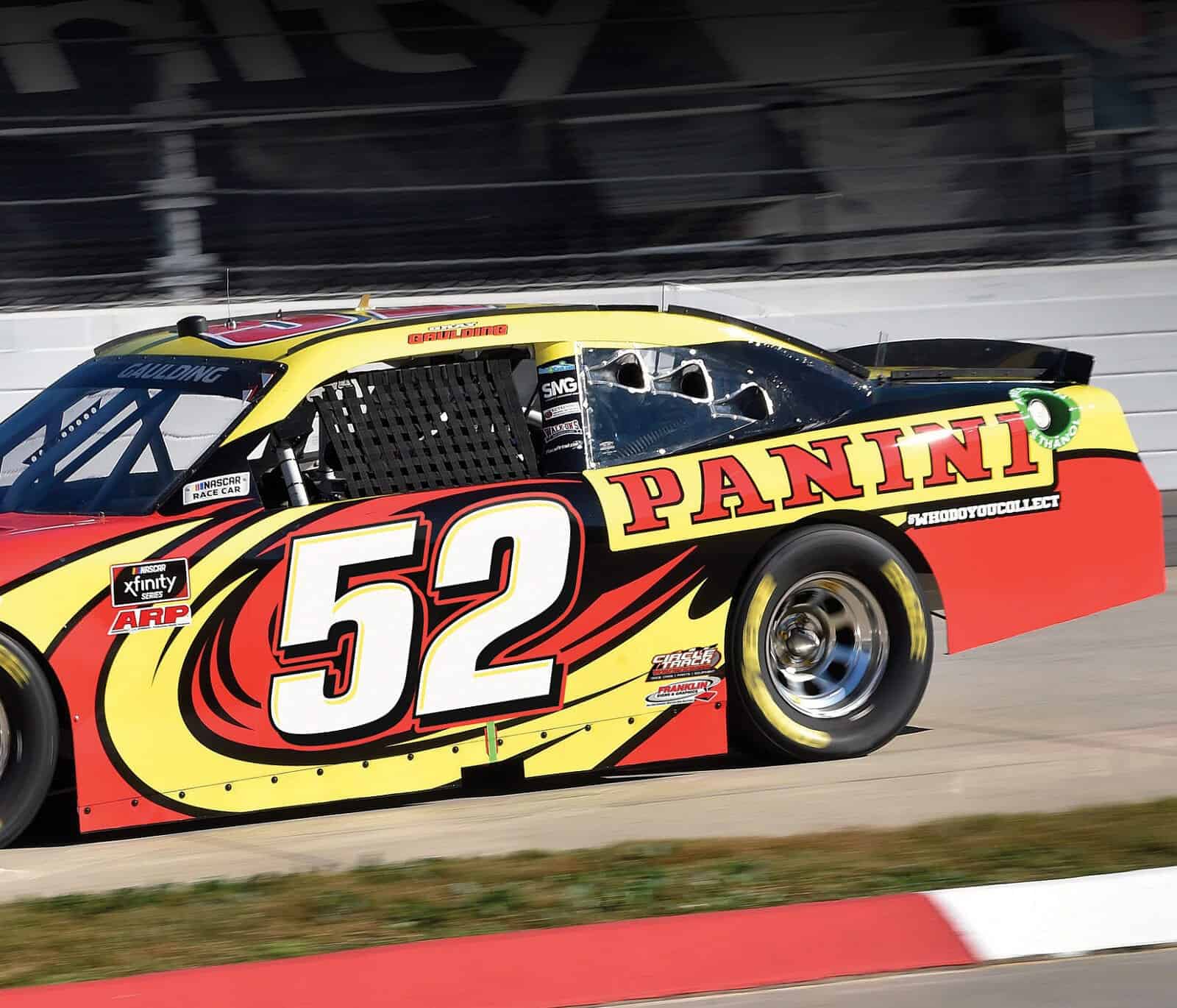 Gray Gaulding will pilot the No. 52 Chevrolet full time for Jimmy Means Racing in the NASCAR Xfinity Series this year, and on Feb. 9, the young driver discussed his move to a full-time ride in the series after a part-time schedule in 2020.

Gaulding, who turns 23 on Feb. 10, will receive sponsorship from Panini America for multiple races as Gaulding competes in his second full-time season in the Xfinity Series.

In 2020, Gaulding raced the No. 07 car for SS Green Light Racing in five races, tying a career-best finish with a second-place result at Daytona International Speedway along with earning an eighth-place finish at Talladega Superspeedway. Gaulding also drove the No. 74 car for Mike Harmon Racing at the Charlotte Motor Speedway ROVAL last fall.

In an interview with Frontstretch, Gaulding noted he the hard work that went into piecing a part-time schedule together for the 2020 season. Knowing he has a full slate of races ahead of him has proved encouraging.

“I had to do what was best for my career and that’s what I had to do,” Gaulding said via Zoom. “But now I feel like I’m back. I’m rejuvenated. I just feel like I’ve got that extra pep in my step, popping my collar like, hey, it’s race time now – full time. It ain’t no part-time gig for me anymore. So my confidence right now, I just cannot wait to pull in them gates at Daytona and get to business.”

Panini America, branded as the official trading card of NASCAR, has sponsored Gaulding in nine Cup Series races for Rick Ware Racing as well as in 11 Xfinity events for SS Green Light Racing. Gaulding credits the sponsor for keeping his career alive.

“Without Panini, I really don’t know where my career would be,” Gaulding said. “I put them in the category of almost saving my career. We all know this sport takes sponsors and partners, but when you’ve got partners like Panini, we have that relationship outside the brand. And I love the brand. I can relate to it [as] an avid card collector my whole life.

“The synergies were there from the get-go, but it’s just about who they are as a company and the individuals that take care of everything, I’ve just been so pleased and blessed to know them.”

According to a press release from Gaulding’s managing group Standout Managing Group, returning sponsors for Daytona include Kuykendall Hearing Aid Centers and Refi4Cash.com, which participated in 2020, along with several new sponsor partners that will be announced at future races throughout the upcoming season.

An unspecified number of races are still unsponsored for the No. 52 car this season.

“We’re always looking for new people to bring to NASCAR,” Gaulding said. “A lot of people don’t realize how great of a sport NASCAR is for even B2B. And yeah, everything with COVID, it’s been a tough time. That’s what makes me appreciate everything Panini’s done.

“Panini really stepped up big time for us this year, and not just for me but everyone here at Jimmy Means.”

Tim Brown will continue to crew chief the effort for Means, coming back for his 12th year with the company. Kody Vanderwal drove the No. 52 for most of last season.