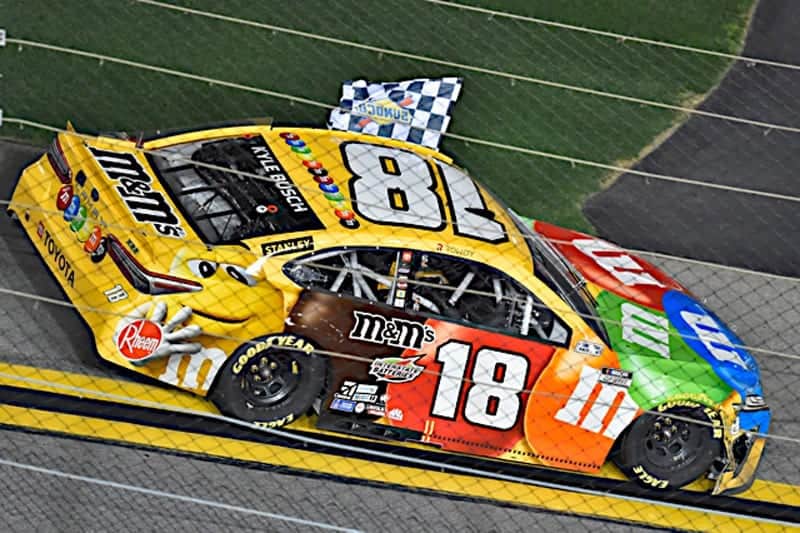 The Busch Clash provided an exciting start to Speedweeks, as a last-lap pass solidified a win for Kyle Busch. The 2012 Clash winner started from the 16th position and led only one lap en route to his second win in the exhibition event.

Following contact between Chase Elliott and Ryan Blaney, Busch passed the pair coming to the start/finish line to win.

“I just knew to keep my head down, keep [my] focus ahead,” Busch told FOX Sports 1. “Just seeing if I could hit my marks and get close enough to see if I could have a shot like that if something like that were to materialize. Fortunately, it did for us…it’s awesome to start off a year with a win – a non-points win – but I would love nothing more than to be right here this Sunday.”

From the beginning, the track conditions and no practice proved to be costly for several drivers. The dirt from the track caused some issues even to some of the most experienced drivers: Kevin Harvick spun off the chicane on lap 3 due to the dirt, which started to pileup there and on drivers’ grilles. Because the track was getting so dirty, NASCAR threw the first yellow of the night.

The next issue was drivers overshooting the corners. On the ensuing restart, leader Blaney overshot the entry to turn 1 and lost several positions. This wouldn’t be the last time someone did that either.

Before the competition caution on lap 16, several drivers decided to pit for tires including Blaney, Elliott, Kurt Busch and Alex Bowman. When the caution flew, leader Martin Truex Jr. was looking for the pace car and missed the frontstretch chicane, which resulted in him having to restart at the tail of the field. During the pit stops, Kurt Busch took fuel only, giving him the lead.

On the second restart, the elder Busch sent his car way too deep and missed the corner. As he went from first to deep in the pack, he had a chance to catch up when the third caution came out for Cole Custer missing the chicane and stalling his car.

Custer’s car had smoke and flames erupt from it, but he eventually returned to the track several laps down.

.@ColeCuster is having all sorts of issues with his 4️⃣1️⃣ machine. #BuschClash

The race was shaping up to be a Joe Gibbs Racing runaway. Denny Hamlin led a majority of the laps early in the race, and Truex was the only driver able to keep with Hamlin. Truex, who battled back from the rear of the field twice, took the lead from Hamlin on lap 28, but unfortunately ran into a problem.

As Truex exited the backstretch chicane, he lost control due to the dirt on the track and hit the outside wall. The accident brought out the caution. The No. 19 failed to finish the race and had to settle with a last-place finish in the 21-car field.

With seven laps left, crew chiefs had to decide to pit for valuable tires or keep the track position, and the decision ended up being split throughout the field. Six drivers stayed out, including Elliott, while the leaders pitted for tires.

With three laps to go, there was a chance for a caution as Tyler Reddick spun Chris Buescher on the frontstretch chicane. Bowman tried to avoid Buscher on track but clipped the No. 17 car. Buescher’s car sat backward on the track, but NASCAR did not throw the caution as Buescher refired his Ford.

Blaney, who was the furthest up with the freshest tires, caught Elliott for the lead. With two laps to go, Blaney passed Elliott for the top spot, then tried to not to make any mistakes while the 2020 champion pressured the No. 12 for the win.

In the final chicane of the final lap, Elliott dove inside of Blaney, the two made contact and the No. 12 spun. As Elliott was trying to get back up to speed, Kyle Busch blew by Elliott to win the Clash.

They call it The Clash for a reason. pic.twitter.com/cVl4LG2BcJ

“Not too bad [of a start],” Busch said of the milestone. “I’ve been through a couple crew chiefs, and it always seems to kind of go well for a while, and then it kind of fizzles out. It kind of just is what it is in the sport of racing, but we had a great car here tonight.

“We worked a lot over the winter to focus in on what we could do for this race, to know that we needed to get better for race number two [at the Daytona International Speedway road course] coming up in two weeks.”

The rest of the top five consisted of Elliott, Joey Logano, Reddick and William Byron, who recovered from completing a full lap on a stripped left rear tire under one of the cautions.

NASCAR will switch from the Daytona road course to the superspeedway for the Daytona 500. The 63rd running of the race will be on FOX, set to start on Feb. 14 at 1:30 p.m. ET.

Personally I was unimpressed with the race and found it dull. Once the race went green there were a few that checked out and from there it was mostly follow the leader. Then NASCAR decided to throw the race to yellow to clean up the track because it was dirty. Perhaps it was really that bad, however I think it was just another reason to bunch up the field followed by the competition caution to bunch up the field again. There were a few legit yellow flags for cars spun out and the restarts were the only time to see the cars making moves to advance. The last 4 laps were decent to see Blaney and Elliot battle it out and see Kyle squeak out a win due to the wreck. I personally would have preferred that the race be on the oval.

The clash has lost its luster over the past decade or so and speed weeks in general. While the good ole days are over, I think the whole Daytona speed weeks are weak for a reason.
When there was the preseason thunder, I found it fun to watch to see the lap times by manufactures. There was always the runor on what manufacturer was sandbagging around in hopes NASCAR would allow them to make some aero changes or what-not. Once preseason thunder was over, everyone had to sit and stew over what manufacture was off the pace and how they were actually going to race. The practices during speed weeks was also exciting as every run you could see how the times were increasing or decreasing. Again, it made me wonder if NASCAR would make a last minute change to help that brand pick up some speed. Most cars in practice still didnt show their true hand until the Clash. That right there brought up the excitement of seeing who was holding back and who could be a threat to run up front and compete for a win in the 500. If was also fun to see what team or crew chief was pushing the boundaries and who got caught which ended up with a fine, crew chief suspension or both. Qualifying was also exciting, because if you didn’t make the front row then everyone (even the big stars) had to run good in the twin 125’s with the exception of the past champion provisional.
I know these days are long gone and are never coming back due to the cost cutting, the laser scanner for the cars and the factory Sims. As a result, these are the reasons speed weeks and the clash don’t really matter anymore.
Perhaps next year will be better with the new car, however I don’t expect anything to change.

I guess I watched a different race than this writer. I didn’t see the leaders make contact. I watched Elliott take out Blaney.I think Elliott is so full of himself he forgot that drivers race you the same way you race them. I’m afraid Mr Elliott has some races ahead.

Blaney wasn’t even angry after the race. I don’t think Chase has anything to worry about.

The 12 pinched the 9 down and the 9 didn’t check up. Could have gone deeper onto the curbing but that would have only upset the 9 more and probably resulted in a worse wreck. It was good hard racing for the win in an event that 2nd has no meaning.

This race use to be all about the money and speed. A big purse and lots of dollars to the winner. Not a word was mentioned about either one by the three stooges. Can they raise the bantering up another level. I like it when they talk over each other and giggle (sarcasm).