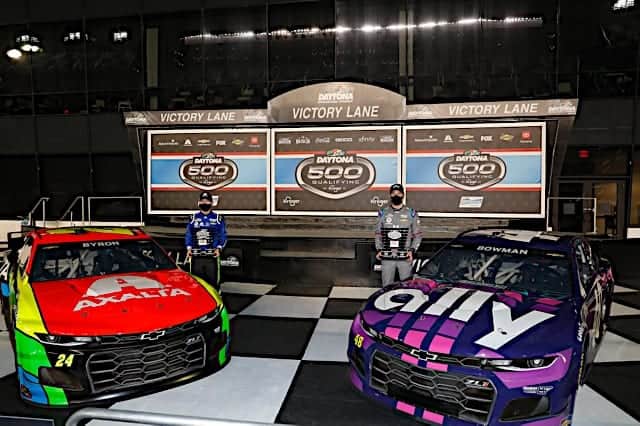 This is his second career Daytona 500 pole. It’s also his fourth consecutive year on the front row, the first time in NASCAR Cup Series history. His teammate William Byron will start alongside him on the front row after notching a lap speed of 190.219 mph.

“It doesn’t really have a whole lot to do with me, right?” Bowman told FOX Sports after the session. “It’s a testament to these guys and everybody back at the shop at Hendrick Motorsports, they work so hard on these superspeedway cars. They’re beautiful when they get to the racetrack. Our Ally Camaro’s obviously been really fast since we unloaded and they focused a lot on trying to get the pole for the [Daytona] 500. It means a lot to us and obviously we were able to achieve that.”

It’s a front-row sweep! @Alex_Bowman wins the pole for the #DAYTONA500 and will share the front row with teammate @WilliamByron.

This is the seventh time Hendrick Motorsports has swept the front row for “The Great American Race!” pic.twitter.com/bRgmAeVnKS

Derrike Cope wasn’t able to get on track before time expired due to a battery issue, but he’s still locked in as a car with a charter.

Noah Gragson will need to race his way in during Thursday’s Duels after his No. 62 Beard Motorsports Chevy failed inspection three times.

This was the first time a qualifying session was held in the Cup Series since last May.

The way everyone was talking about the fastest car in practice I thought for sure the fix was on. Glad it wasn’t. An HMS car on the pole at Daytona…. business as usual.

Bowman took it upon himself to ignore orders letting that car win the pole. Kyle let that car lead the five toyotas in practice, but if I was that car I wouldn’t count on him giving you a thought all year.

i thought the same thing. especially when that car had the outside pole for a while.

hopefully i’ll remember thursday night to watch to see how that car races and where they finish.

interesting that the old guard of the 48/24 are on front row.

Re the 24 and 48 on the front row… I know what you mean. The more that things change, the more they stay the same.