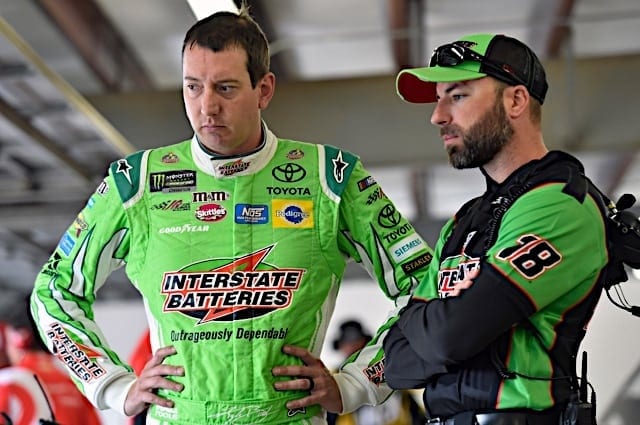 Busch’s comments came in a segment of an interview done by Graham Bensinger.

Busch and Stevens were broken up by Joe Gibbs Racing after they earned two championships and 28 wins over six season. But the end of their tenure saw them win just two races from June 10, 2019, through the end of 2020.

Busch is now paired with Ben Beshore, while Stevens is working with Christopher Bell on the No. 20 Toyota.

“I don’t know, man,” Busch said, seemingly initially uncomfortable at discussing the crew chief change when Bensinger asked about it. “There were some periods of time this year where there was a bit of a struggle for us, obviously. The communication was never a problem. The work ethic was never a problem. Something just wasn’t working and clicking.”

During the offseason, Busch said he asked Stevens to make a “couple” of personnel changes on the No. 18 team, but that Stevens refused.

Busch said he was “shocked” by Stevens’ decision to not make the changes. At the beginning of their conversation, Busch had “flat out” told Stevens he was “my guy.”

“I was like, ‘Well, you essentially just told me you quit on me, so see you later. Now I have to go find somebody else,'” Busch said. “I guess all good things must come to an end.”

Busch and Beshore, who won Tuesday night’s (Feb. 9) Busch Clash, are no strangers to each other. Busch earned four Xfinity Series wins with Beshore as crew chief in 2019.

Busch addressed the initial stage of his tenure with Beshore last week during his Daytona 500 media availability.

“We’ve been meeting periodically here and there, talking on the phone a little bit here and there as well, too,” Busch said. “I’ve had my fair share of seat fittings here this off season, just to kind of get everything kind of back in order, back where I wanted it and to feel comfortable and stuff like that. So he (Beshore) was a part of each and every one of those and just being down on the floor, being with some of the guys and kind of intermingling and mixing in with what all we were doing and had going on. Besides just kind of side talk on that front, we obviously talked about a lot of different things that we did do well and didn’t do well last year, as far as the [No.] 18 team goes.

“So I kind of let him into my aspect of what I thought. I know also that he’s obviously been in constant contact with Adam as well, too with their relationship. Obviously, Adam hired him on, brought him on years ago in 2015 when I got Adam as my crew chief on the Cup side. There’s been a lot of things that those guys have been working on and the engineering groups and stuff going back and forth on how to prepare for this year.”

Just Kyle being Kyle. Of course the off year gets blamed on the crew chief (the coach is almost always fired before any players). It will be very interesting to see if he has another off year who gets the blame (picking up the scraps in an exhibition race doesn’t count). That said – he is way over due for a 500 win and I have a feeling luck will be finally with him this year.

Except for Danica. In that case it really was the crew chiefs.

Change is healthy!!!! To great racing minds that needed to go seperate ways. Happy for Rowdy to have a fresh start. Go win Daytona!!!!

Who would ever be surprised when a crew chief ‘quit’ on Kyle Busch. He has to be the worst ‘boss’ to work for of everyone in the garage area. I appreciate his talent as a race car driver; his personality stinks!