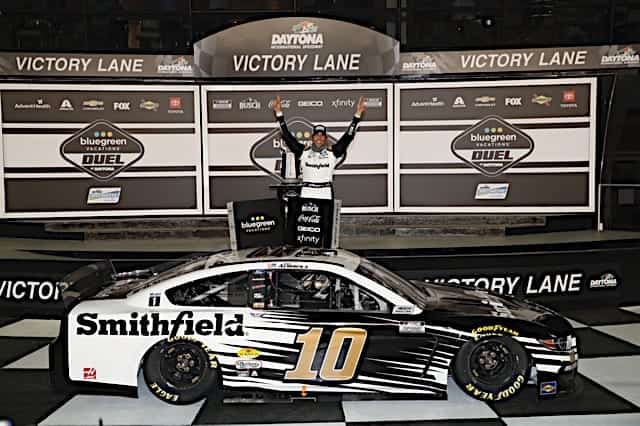 Aric Almirola used a shove from Christopher Bell to snag the victory in the Bluegreen Vacations Duel No. 1 at Daytona International Speedway.

Almirola will start the 2021 Daytona 500 in third, seeking his first Daytona 500 victory and his second NASCAR Cup Series win at Daytona.

“All these guys on this team built me an incredible Ford,” Almirola told FOX Sports 1 after climbing out of his No. 10 Stewart-Haas Racing Ford. “What a way to kick off our 10th season together with Smithfield. We’ve been celebrating that all offseason, my 10th year in the Cup Series, working with Ford, it’s a great way to start Speedweeks.”

Almirola led a race-high 52 laps en route to the win ahead of Bell by 0.041 seconds.

Almirola will start the Daytona 500 in third.

By virtue of the finishing order of #BluegreenDuel No. 1, @AustinCindric clinches a spot in the #DAYTONA500 based on qualifying speed. pic.twitter.com/T8GoN2Uvrs

“I get the bonehead of the race award for speeding in the last section of pit road,” Cindric told FOX Sports 1 in his post-race interview. “I nailed everything else all night I didn’t know how to do. I’m obviously very happy to get the No. 33 Ford into the big show. A lot left for me to learn, but racing on the biggest stage against the best drivers, it’s an amazing opportunity.”

.@AustinCindric will make his NASCAR Cup Series debut … in The Great American Race!

He chats with @NASCARONFOX following the first #BluegreenDuel race. pic.twitter.com/2HGEkAbotg

The reigning NASCAR Xfinity Series champion, Cindric will make his Cup Series debut as he begins his part-time Cup slate this year before moving up full time in 2022.

Daytona 500 pole-sitter Alex Bowman finished four laps down in 20th. He briefly brought his No. 48 Chevrolet onto pit road due to a possible engine issue. Hendrick Motorsports examined the car, and he returned to the field, though he affirmed something felt awry.