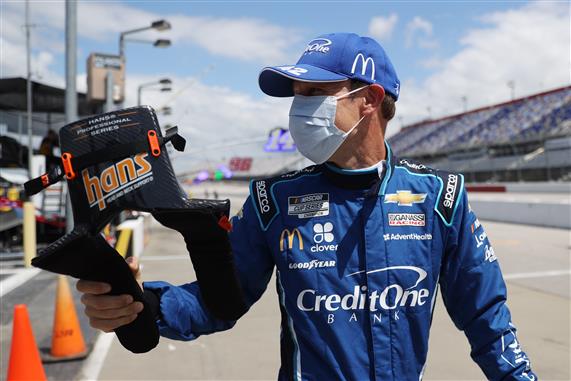 On the now-infamous date of March 12, 2020, I was at work. I was sitting in a radio studio when the internet and various social media timelines began to light up with the cancellations of sports far and wide, of course a direct result of the worldwide coronavirus pandemic.

Hitting closest to home was the shutdown of the Atlantic 10 men’s basketball tournament in New York. My college, VCU, was about five minutes away from tip-off against UMass when the game was wiped from the schedule; so many other teams across all sports suffered the same fate in the hours that followed that Thursday afternoon, and it was like watching dominos fall across the entire world.

The next day, NASCAR announced the upcoming weekend’s races at Atlanta Motor Speedway were postponed and the sport in its totality was put on hold. Admittedly, it was one of the last to shutter for the time being, but the decision fortunately arrived before any races took the green flag that weekend.

This is not to say any of this was the wrong decision. Just shy of 11 months after COVID-19 began to impact the United States, and slightly more than a year after it began wreaking havoc on the world, more than 100 million cases have been reported worldwide and the death toll sits at more than 2 million. In the U.S., the number of cases is almost 30 million and deaths tally just below 500,000.

My home state of Virginia has more than half a million cases. Thankfully, I’ve avoided it so far while continuing to work, but I’ve also been extremely cautious in wearing masks and staying safe while I do. Fortunately, cases have been trending downward over the past month or so, largely in part to vaccination efforts, and hopefully this will continue despite various strains of COVID-19 continuing to surface.

Last year was a bizarre trip around the sun for a lot of reasons, and the coverage landscape looked much different to those of us writing about racing week in and week out.

In the Beginning (and Middle) There Was Chaos

Nearly two and a half months passed between Phoenix and Darlington’s spring races, and the first couple of weeks were filled with uncertainty of which races would still run on their designated dates, if NASCAR could return to racing at all in 2020, and just how long the worldwide pandemic would last.

In that time span, a chunk of the racing community ended up getting acquainted with iRacing; maybe not necessarily racing on it themselves, but watching the service host races filled with NASCAR stars on television within a few weeks of the season stoppage.

While it certainly wasn’t the same as an actual race, it was wonderful to hear Mike Joy, Jeff Gordon and Larry McReynolds back in the booth broadcasting something and seeing actual drivers at some sort of wheel. The first event of the Pro Invitational Series featured a thrilling last-lap battle between Denny Hamlin and Dale Earnhardt Jr., starting things off on a high note.

After I settled into the routine of races, even virtual ones, returning to Sunday afternoons, it felt like a small flash of normalcy despite actual cars not being on track. NASCAR then aimed for mid-May to bring the sound of engines back to speedways, doing so with three races in five days the first week and Cup racing back-to-back on a Sunday and Wednesday at Darlington.

Following the doubleheader, drivers headed north for another one in Charlotte, staying close to home by going to Bristol after that. Atlanta finally got its races in after Bristol to begin the month of June, and things began looking up for a possible full season.

Over the next few months, before the schedule began to relax in the lead-up to the finale at Phoenix, multiple races for each series seemed to populate each week, including 16 races in 28 days in August. Doubleheaders across all three divisions, races added and removed and events that felt out of place for their time of year were constants as the season moved along.

Mother Nature seemed to be unsympathetic, too. Rain delay after rain delay pushed back races, whether to the evening, the next day or in some cases several days (looking at you, Texas in the fall). The Camping World Truck Series’ July race at Kentucky was cut short due to inclement weather, giving Sheldon Creed his first career victory; Creed turned around and won four more races in 2020 en route to his championship title.

Coverage or (Jumping on Post-Race Pressers Remotely Via Zoom)

I had to pay homage to the 2014 cinematic masterpiece Birdman with that section title. Forgive me.

Amidst the fray of 81 races in 176 days (a mind-boggling average of one race every 2.17 days in a nearly six-month span) were Frontstretch and every other organization that covers NASCAR, caught up in the whirlwind of uncertainty of the pandemic.

Subsisting on two months of iRacing coverage kept us writing and involved with racing, as did off-track happenings. Kyle Larson‘s utterance of a racial slur during an iRacing event caused him to be dropped from Chip Ganassi Racing’s No. 42 and essentially start over when it came to sponsors; Matt Kenseth once again unretired to fill the empty seat, competing in a Cup Series Chevrolet for the first time in his then-21-year career.

Even before the pandemic hit, Ryan Newman‘s horrific crash at the Daytona 500 started the season off on an incredibly uneasy note. Newman’s car flipped over just before the checkered flag, becoming airborne and eventually hit in the driver’s-side window by Corey LaJoie. After being rushed to the hospital that night, the team released word that Newman was awake and talking with personnel the next day, followed by his release from the hospital less than 24 hours later. The crash was arguably one of the closest instances the sport has had to a fatality since the 2001 Daytona 500.

Just after the season was put on hold, Truck Series driver Brett Moffitt went under the knife to have surgery on both of his legs after breaking them in a motocross accident. If nothing else, the pandemic gave Newman and Moffitt time to recover; both were back in their respective machines by the time racing returned.

Most reporters’ inability to attend races due to strict safety protocols led to post-race press conferences being held entirely or at least simulcast on Zoom, allowing more journalists to be a part of them, and became a blessing in disguise: the majority of the season’s press conferences, from general post-race reactions to playoff media days, were all available for dozens of people to join in when they couldn’t otherwise be on location.

The pandemic’s impact on the world as a whole tangentially meant that some drivers were more available outside of race weekends to do interviews, such as for Frontstretch‘s “Beyond the Cockpit” profile series. I was able to sit down virtually with Niece Motorsports’ Travis Pastrana, Ryan Truex and Natalie Decker, all of whom ran part-time efforts for the team in 2020.

Like all of us, those three drivers and everyone else at the track had to adjust to protocols aimed at keeping everyone safe. This meant less time working with teammates, fewer interactions with other drivers and no media bullpens after events; reporters who attended races were restricted to the press box or infield media center.

When my home race of Richmond rolled around in the fall, the expected limitations were still in place; however, fellow Frontstretcher Davey Segal and I kept followers updated on Instagram with video updates both remotely and at the track.

Honestly, despite missing hearing the sounds of engines with every fiber of my being, I’m incredibly thankful for the positive opportunities 2020 presented despite its overarching terrible-ness: my first additions to “Beyond the Cockpit,” experience in a number of different areas and columns on this site and more ways of being involved with the sport. That latter aspect applied to us all and carried over into this season, as all 2021 Daytona 500 availabilities were carried out virtually, and I assume all post-race pressers will be as well.

Being at home much more also gave me the opportunity to watch a number of racing movies I hadn’t gotten around to yet. As such, I combined my love for motorsports with my love of film and started “Reel Racing,” where I looked at some intersections of the racing world and movie industry. I kicked things off with an analysis of the documentary Senna, adding on retrospectives of Days of Thunder for the film’s 30th anniversary and ranking Hollywood-themed paint schemes (among other topics) along the way.

Last year wasn’t great on about 17,000 different levels, and things have a long way to go before they get better. I’m thankful, though, for the experiences (even virtual) I was able to have related to covering motorsports, and I look forward to more of the same in 2021.

With the pandemic (hopefully) on a downswing and vaccine distribution continuing to pick up, my fingers are crossed that this year is a vast improvement over how last season was. Who knows? Maybe things will rebound fast enough that we can all be back at races by the home stretch of the season.

And, while I certainly missed being at the track for all of 2020, I can’t wait to be back this season or next. Here’s to a better — and more in-person — 2021 season for us all, be it in the media centers or the bleachers!