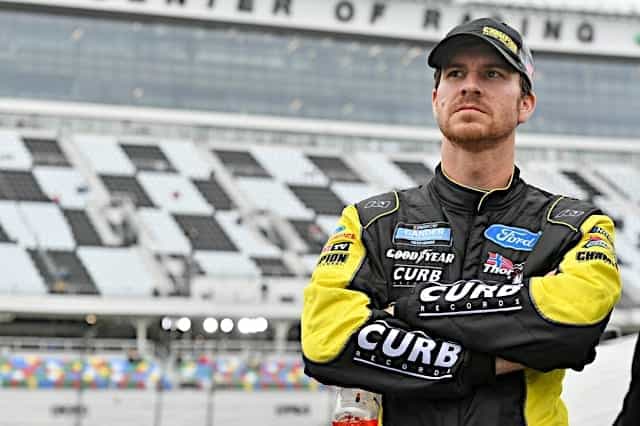 When the green flag flies over Daytona International Speedway, it will mark the return of the Camping World Truck Series name after two years using the Gander RV & Outdoors moniker.

“The transition back to the NASCAR Camping World Truck Series demonstrates the continued power of NASCAR’s brand-loyal fan base and creates a broader touch point with fans who are RV and Outdoor enthusiasts,” Camping World CEO Marcus Lemonis said in a statement last year when the move was announced. “We leveraged the series to support the successful launch of our new brand in 2019, and look forward to celebrating the 2020 NASCAR Gander RV & Outdoors Truck Series Champion in November.

“The next generation of the NASCAR Camping World Truck Series is right around the corner, and we’re committed to the series that has delivered for our customers, fans and the entire Camping World family of brands.”

Demoted to part-time, Grant Enfinger will split the ThorSport Racing No. 98 Toyota with Christian Eckes, who moves over from the Kyle Busch Motorsports camp after spending his rookie season inching his way toward victory lane but never quite getting the job done. Ultimately, it was sponsorship that put Enfinger in the part-time position for the season.

“There is so much of stuff that is in our control and so much that isn’t,” Enfinger said to a group of media members last week. “It’s a tough time right now to put all these deals together and go racing.

“As much as this is a competition based sport, it’s also a business. There’s a million different ways to put these deals together and to make them work. This year, it just happens to be part-time. That’s what it ended up being. It’s not that I’m happy about it or anything like that, but it’s still a great opportunity. It’s how it all played out this year.”

That’s not to say there’s zero chance of Enfinger running full-time this year, though. If he comes out and wins the season opener Friday night, don’t be surprised to see ThorSport work a little harder to keep him behind the wheel in some capacity for the 10 races he’s currently not scheduled to run to keep his championship eligibility in place.

GMS Racing intends to come out swinging with a full five-truck stable that includes defending champion Sheldon Creed. During the 2020 season, the team snagged 10 victories en route to its second championship in three years. Joining Creed will be Zane Smith, Tyler Ankrum, Chase Purdy and Raphael Lessard, who moves over after his single-win rookie season with Kyle Busch Motorsports. Brett Moffitt, who raced with the organization the last two years, will run full-time in the Truck (Niece Motorsports) and Xfinity (Our Motorsports) series.

John Hunter Nemechek returns to the Truck Series after a year behind the wheel of the No. 38 Front Row Motorsports Ford.

What’s interesting is the choice to drop back from the NASCAR Cup Series to the lowest of the sport’s top three tiers. Though he finished a season-high eighth twice at Talladega Superspeedway, Nemechek’s average finish of 22.4 wasn’t exactly earth-shattering in Cup.

The logic behind the move is sound. After all, any racer wants to win, and KBM is more than capable of just that. Sure, it’s a step down in the sense of moving to a lower series, but Nemechek is putting himself in a better position to be noticed as a contender for wins on a regular basis rather than running mid-pack with the occasional sniff of the front of the field. It’s something to pay close attention to throughout the season, because if Nemechek finds success that ultimately propels his NASCAR career forward, it wouldn’t be surprising to see others model themselves after his example.

As usual, Kyle Busch will be making his five allowed Truck Series starts, sharing the No. 51 Toyota for KBM.

Despite the assumption many people have that the two-time Cup Series champion is unstoppable on the track, Busch entered a combined 19 races from 2018-2020 and won just six of those events. Sure, that’s almost a third of the races he’s in. However in the three years prior (2015-2017), Busch was in victory lane 50% of the time (21 wins in 42 starts).

Whether you agree with Cup drivers running races in the Truck Series, the fact of the matter is that KBM likely wouldn’t exist if not for Busch driving his trucks for the handful of races. It’s not like he’s a lock to win anyway, and multiple drivers over the years have talked about the benefits of having him race in the series.

Timothy Peters will make his return in a planned full-time effort for debuting team Rackley W.A.R. In its inaugural season, the organization will share a technical partnership with GMS Racing. Additionally, the new team was given the opportunity to purchase equipment from the powerhouse. Chad Kendrick will sit atop the pit box for Peters’ return to the series.

“The NASCAR Camping World Truck Series has always been special, and to have the opportunity to return to full time competition is a blessing,” Peters said. “I am very grateful to Willie Allen and Curtis Sutton for the opportunity to represent Rackley Roofing and W.A.R. Shocks. Both gentlemen are top-notch people with a singular determination to win on and off the track.”

This year’s rookie class will consist of five drivers fighting for Rookie of the Year honors. Hailie Deegan, Kris Wright, Chandler Smith, Chase Purdy and Carson Hocevar will face off throughout the season as they each navigate their entry into full-time Truck Series racing.

ThorSport Racing enters the season facing a few unknowns. A last minute announcement of its stable of drivers sees the organization with much of the same in Matt Crafton, Ben Rhodes and Johnny Sauter returning full-time. Additionally, Enfinger and Eckes will split a fourth entry.

But this season may not go off without a few growing pains along the way, after a late announcement that the organization had ended its three-year partnership with Ford. Instead, ThorSport will return to running Toyotas, which backed it from 2012-2017, a tenure that included Crafton’s back-to-back championships in 2013 and 2014.