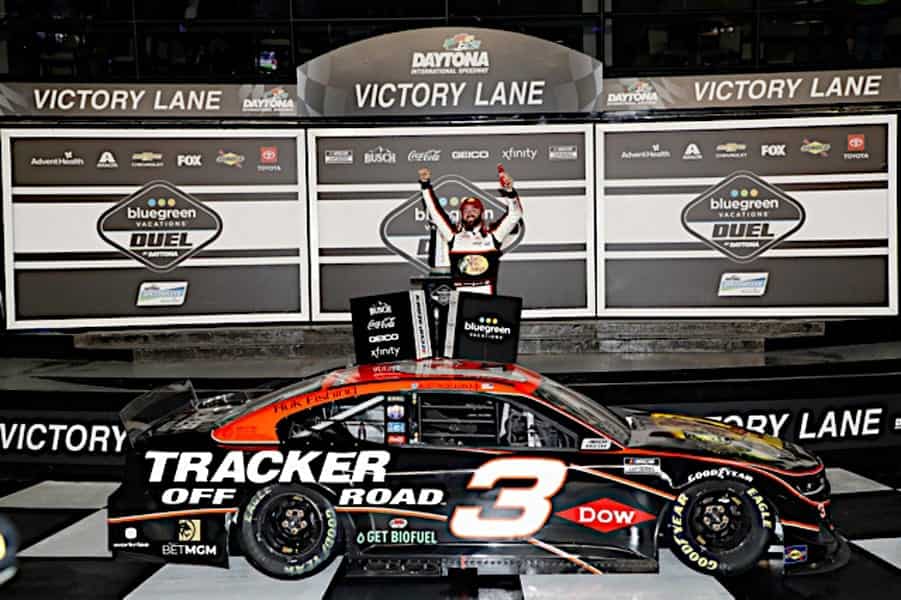 Austin Dillon won on a crossover move in NASCAR overtime to win the second Bluegreen Vacations Duel at Daytona International Speedway to set the field for Sunday’s (Feb. 14) Daytona 500.

He bested Bubba Wallace, who debuted a fast No. 23 23XI Racing Toyota.

Dillon is seeking his second Daytona 500 victory. He will start the season opener on Sunday (Feb. 14) in fourth.

“I was talking to my spotter before the restart about the No. 4 [Kevin Harvick],” Dillon told FOX Sports 1 after climbing victoriously out of his No. 3 Chevrolet. “He’s been pushing all night. He had the No. 12 [Ryan Blaney] with him, so I knew it was going to be tough with the manufacturer. I made a decent block on the backstretch, a heck of a push through [turns] 3 and 4. I knew Bubba was going to try to block it, but I just whipped the wheel and it worked out well.”

Coming to the checkered, @austindillon3 takes it from Bubba Wallace in Duel 2 at @Daytona! (Via @NASCAR) pic.twitter.com/V40ZAcYCQv

Wallace led three laps but was displeased with himself despite finishing 0.057 seconds behind Dillon.

“Lot of mistakes. Good debut but nothing to be happy about myself,” Wallace told FOX Sports 1 post-race. “It’s ok for drivers to be hard on ourselves, it’s how we motivate ourselves to be better. Hats off to my guys at 23XI Racing for a great Toyota. Tried all I could to help Martin Truex Jr. get Toyota the win. Thanks to Kyle Busch for cutting me a lot of breaks. I have a lot to learn, but all in all, it was a good night, I got some learning to do.”

"I've got some learning to do." @BubbaWallace reflects on his P2 effort in #BluegreenDuel No. 2. pic.twitter.com/4YfLAyTsI8

David Ragan was the highest-finishing open driver. As a result, Kaz Grala made the Daytona 500 via his single-car qualifying time.

Garrett Smithley and Noah Gragson both were involved in a late-race caution. Gragson’s bid to make his Cup debut ended with a DNF, and Smithley became the second MBM Motorsports driver who failed to advance to the season-opening race at Daytona International Speedway, following Timmy Hill in the first Duel.

Late in the race, as Smithley raced alongside Gragson in a battle for the final transfer position, Smithley made contact with Brad Keselowski. The ensuing wreck collected a number of cars, including second-place starter William Byron. Byron will have to go to a backup No. 24 and therefore drop to the tail end of the field before the start of the Daytona 500.

The Daytona 500 will take place Sunday at 2:30 p.m. ET with TV coverage provided by FOX.