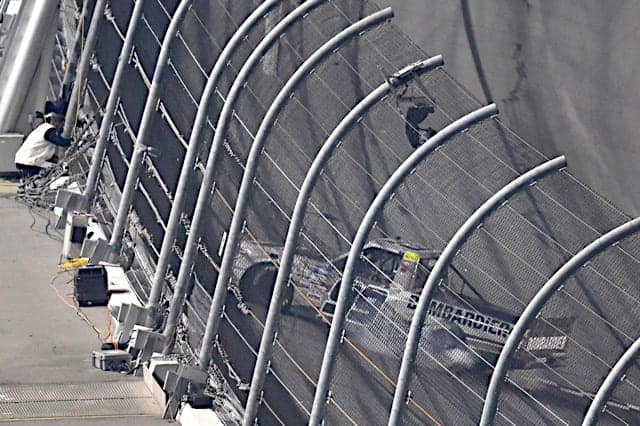 In typical fashion, this year’s edition of the NextEra Energy Resources 250 at Daytona International Speedway was again a compilation of bent fenders, high attrition and one excited NASCAR Camping World Truck Series driver after a wild finish.

That one driver ended up being Thorsport Racing’s Ben Rhodes as the smoke cleared Friday night (Feb. 12). The 23-year-old had to survive myriad crashes throughout the 100-lap contest, pushing through to earn his first career Truck win at Daytona.

"Biggest win of my career," says @benrhodes. "This is it."

On an overtime restart, winless Cory Roper came charging from outside the top 10 to the lead in one lap. But it was not the one that mattered, as Rhodes passed Roper in the final corner on the run to the checkered flag. As they battled, a huge crash unfolded behind them, allowing the road to clear in front of Jordan Anderson. Anderson charged toward the front and came mere feet from his first career Truck win that left the underdog smiling ear-to-ear.

“Two years in a row, to finish second here… it’s a dream come true,” he said afterward. “So much energy, so much emotion… I shouldn’t be here, shouldn’t be racing in a national series. To go through all that we’ve gone through, to never give up… for every kid that races legends, late models out there, never give up! Just keep digging.”

While it proved to be a night filled with jubilation for Rhodes and Anderson, the exact opposite could be said for the majority of the field, headlined by Derek Kraus.

Before the 36-truck field even took the green flag, Daytona was already filling up with casualties. After Tanner Gray failed to accelerate at the start of the race, a chain reaction wreck unfolded that put James Buescher and Gus Dean behind the wall with crash damage. Kraus was the lone competitor involved in the incident to drive away.

Trouble at the start!

As the green flag flies at @DAYTONA, an incident at the back of the field brings out a caution. #NextEra250 pic.twitter.com/vy2ljWrJB1

Kraus went on to collide with rookie Kris Wright on pit road at the first stage break. That was not the only collision during that round of pit stops, as Matt Crafton and Timothy Peters made significant contact.

Still, Kraus was not done, as he brought out yet another caution in stage two following a single-truck spin via a cut tire. In stage three, he had a nearly identical crash for a flat that finally put the No. 19 Toyota in the garage.

With Kraus finally out of the way, other drivers took their turns finding trouble on the way home to the checkered flag. The next stoppage came when an errant bump draft sent Austin Wayne Self and Jordan Anderson for spins on lap 60.

That triggered an onslaught of cautions that began with a three-truck crash involving Tyler Ankrum, Jason White and Sheldon Creed on the ensuing restart.

That could have been much, much worse.

Caution is out for this @TylerAnkrum slide and more. pic.twitter.com/kZQSk0ohSe

After leading laps drafting with father David, Todd Gilliland was taken out in an accident after being put four wide in turn 2. Tate Fogleman and Stewart Friesen were also involved.

Following that accident, a heavy glaze of speedy dry made vision difficult at high speeds. Rookie Hailie Deegan went for a spin and made inside wall contact trying to avoid other campaigners lost in the low visibility. A potential top-10 effort turned into a 24th-place disappointment in her second Truck start.

The biggest crash of the night soon followed. Timothy Peters cut off Drew Dollar in front of the entire field, sending over a half-dozen trucks sliding out of control and forcing NASCAR Overtime.

Two separate incidents back-to-back! @CSmithDrive spins, but then an accident on the backstretch takes out multiple contenders! pic.twitter.com/1sfAUYn5KY

When the dust settled, the wild two-lap shootout gave Roper a chance to slingshot toward the front. Finishing third, it was his best result in 28 career Truck Series starts.

Ryan Truex, recovering from a mid-race incident, wound up fourth while Carson Hocevar rounded out the top-five finishers.

The Truck Series returns to action next week to contest the Daytona International Speedway road course on Friday, Feb. 19. The green flag is scheduled to drop at 7:30 p.m. ET with TV coverage provided by Fox Sports 1.