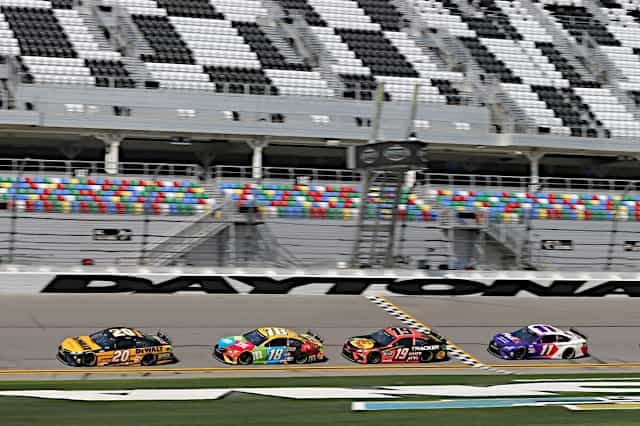 Who is more likely to end their Daytona 500 drought first: Kyle Busch or Brad Keselowski?

Luken Glover: This is a tough one because neither driver has really established themselves as a favorite at the end. Trouble seems to find both of these champions at the worst times. However, I have to go with Kyle Busch. Brad Keselowski will likely have more speed, but as we know at Daytona International Speedway that’s not what only wins superspeedway races. Keselowski’s last top 10 in the Daytona 500 came in 2014. Since then, Busch has two top fives. Not eye-popping stats from either driver by any means, but if the Toyotas team up, Busch can carry the momentum from his Busch Clash win.

Zach Gillispie: Busch has already been off and running in 2021. He won the Clash in a thrilling fashion and was very fast in practice. Keselowski hasn’t been bad this week, but he has been uncharacteristically quiet. Sometimes those who lurk in the weeds pounce, but Busch is already fast, motivated and determined to write off last year’s wrongs. These are the qualities that can easily help put the Harley J. Earl Trophy in your hands. But it’s Daytona, so anything can happen.

Daniel McFadin: Keselowski. He’s more of a natural on superspeedways, apart from the wrecks he gets caught up in.

Brad Harrison: Keselowski. Plate racing is a science, and Keselowski has a good grip on it — see his wins at Talladega Superspeedway. He has been in place to win at Daytona, but as has been shown for many drivers during the years on the famed high banks, all you need sometimes is some good old fashioned luck.

Adam Cheek: Busch, probably. Keselowski hasn’t seemed to be the speed demon at plate tracks he was a few years ago. He’s certainly still a force to be reckoned with at the configurations, but Busch was second in 2019 and led laps in that edition and the next year. Busch has also had his struggles at plate tracks, but that new partnership with Ben Beshore on the pit box — which started on a high note on Tuesday night — might get him to victory lane before the No. 2.

Should the Daytona 500 be the only race on the schedule where the charters don’t guarantee you a spot?

McFadin: No, that would open a whole can of worms if someone like Chase Elliott didn’t make the race. If this were the ’90s and the question were “should provisional starts exist,” I’d answer “Heck, no; if Darrell Waltrip is too slow to make the race, that’s on him.” But it’s not the ’90s.

Harrison: Yes, but with some safeguards in place. Maybe lock in past winners or past champions, but as it stands right now, there is very very minimal drama as to who’s going to get in and who is going home. There’s virtually no incentive for teams to get up on the wheel, save for a select few. The qualifying races on Thursday need to mean something to teams. Right now, that is not the case.

Cheek: I’m torn on this issue, because there’s a fine line between prominent cars going home due to an issue that’s out of the blue or out of their control (or both) if the locked-in charter aspect is eliminated. However, you have very few question marks if it’s kept in place, and I’d love to have that excitement be a bigger part of the Thursday night Duels. For now, though, I’ll say no: there usually are several cars fighting for a couple of starting spots once the Duels roll around, and having more desperation over said spots might just result in crashes both bigger in size and in scale than normal during the twin races.

Gillispie: The concept of the charter system is solid, but its implementation has been hardly ideal. We could go on and on about what needs to be fixed, but it is not worth the effort. However, if you take a trip to pretty much any short track around North America, you won’t find very many locked-in starters. That’s why heat races are so exciting. If you want to race, you better show speed to race. Every race should have no guaranteed spots, and who the hell cares if it’s the damn Daytona 500 or some 20-lap feature at your local 3/8-mile track. If you are going to race, you need to show worth that you’re worthy of being there.

Glover: No. Yes, it does take a lot financially and physically to show up at the track. However, I began watching NASCAR right around 2005 when there were more than 43 entries nearly every week, guaranteeing that someone would go home. One race that I would at least like to see use the same format is the Coca-Cola 600. It’s not the same challenge on the cars like we saw in the 1970s-1990s, but it is still one of the most prestigious races. That is a race I would like to see more cars enter and try to make one of the most important races of attrition on the season.

Who is your preseason Xfinity Series championship front-runner?

Gillispie: Two drivers dominated the series last year: Austin Cindric and Chase Briscoe. With Briscoe absent this year, Cindric will gobble up even more wins and be the driver to beat each and every week. He will go back-to-back and then go Cup racing in 2022 just like Tyler Reddick did not too long ago.

Cheek: It’s got to be Cindric. His closest competitors will be Harrison Burton and Justin Allgaier, but Cindric was in another zip code from those two last year. Briscoe was his main competition, and Briscoe made the jump to Cup for 2021. Cindric could easily put the 10-win mark in his sights, and I wouldn’t be surprised if he approaches or surpasses that amount before the year is up. The Ohio native is also set to make the transition to Cup in 2022, so he’ll want as much wind at his back as possible when he heads to Wood Brothers Racing.

Glover: Reigning champion Cindric should be the favorite. He’s coming off of a six-win season during which he had to defeat the winningest driver Briscoe. However, there is another driver I am keeping a close eye on: Daniel Hemric. Sure, he has never won a NASCAR race. Sure, he’s been with some powerhouse teams in the past and still didn’t win. But Hemric put it best when he said his past organizations were rides he had to build up. Each time he landed a ride, that specific team was a step behind. Last year, he had to deal with COVID-19 restrictions and a part-time deal. Now with a Joe Gibbs Racing team that can win right off the bat, I would not be surprised to see the No. 18 Toyota fighting for the title. Remember, despite not winning, Hemric made the Championship 4 in both of his Xfinity seasons with Richard Childress Racing.

Harrison: Burton was white hot to end last year, but with the momentum that Cindric has and the power from Team Penske behind him, it’d be hard to go against him.

McFadin: Cindric, easily. It’s really weird to once again live in a world where the defending Xfinity champ sticks around for another year.

With so many inexperienced drivers participating, should the Camping World Truck Series continue to open its season at Daytona?

Harrison: Racing on the big track is fine, but why not give the series another bump and run as a preliminary race on the road course to lead into the Clash? In that you’ll have a similar show and energy as when the track on the backstretch was used.

Glover: Yes. There are going to be some drivers who need more experience. However, these are supposed to be some of the best young drivers in America. When restrictions are finally lifted, there should be more testing and practice time in the future. This series has put on a good show over the years, and while safety should be a top priority these drivers also need to be held to a high standard.

Gillispie: We’ve been opening the Truck season at Daytona since 2000. If we look at the race results every year since, I don’t see too terribly much experience in any of these races. Whether it is a teenager or an older racer, the Truck Series has historically been a circuit where drivers attempt to find their footing while getting experience at some of the best motorsports facilities. Leave it that way.

Cheek: Speedweeks isn’t Speedweeks without every single series taking a turn on the Daytona surface. Sure, the Truck Series is on average the most inexperienced arm of NASCAR, but it would be that way regardless of where it races. Daytona has seen its share of violent crashes for the series (Geoff Bodine in 2000 and both Miguel Paludo and Joey Coulter in 2012 come to mind), but those were all products of racing; those kinds of crashes, and the Big One in general, would happen regardless of when the series visits the superspeedway. Trucks on Friday, Xfinity on Saturday and Cup on Sunday has always been the perfect three-day buildup.

Of course, the best teams need to be locked in to the Daytona 500. The non-charter teams have no chance of winning the race and somebody who gets lucky in the Duels with no chance of being competitive in the 500 shouldn’t get a spot over a team who deserves to be there based on past performance and commitment to the sport. The Daytona 500 has lost a lot of its luster with its emergence as a demo derby with the winner perceived to be more lucky than good. Keeping a top team out of the race due to a fluke would only worsen its damaged reputation. To me, it’s just another race and the same rules should apply as to all the other points-paying races.

If there was real qualifying and Elliott had a problem and didn’t make the field, I’m sure Mr. H could buy his way into the event. It is similar to a short track points leader failing to qualify for a feature and taking over for the driver of a car that did. It’s not like it hasn’t happened before at one of Brian’s product events. Elliott would probably get a backup car from one of his teammates and take the number of the car he is driving.

The charter system destroyed what the Daytona 500 was, the Duels are now just a practice as the charter teams are allready in the race without ever taking a lap sorry but that is not real racing

No one should be locked in to any race. I didn’t care for the provisional system that DW abused back before the charter welfare system but I could accept it more than the charter corporate welfare system that is in place now. I don’t agree with the theory that drivers should get in because they have corporate sponsors that need to have their brand out there. It’s racing first and while sponsorship is part of racing it shouldn’t come before racing. Additionally, whether or not a team is deemed worthy enough by some to be allowed to race as they may not be competitive enough for the race could be quickly weeded out by qualifying on speed. Jo states above that the best teams “need” to be in the race but I disagree. The fastest need to be in the race.