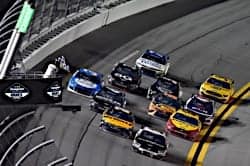 Following the Thursday Duels at Daytona International Speedway, the starting lineup for the 2021 Daytona 500 is set.

Aric Almirola and Austin Dillon, meanwhile, will start third and fourth after winning their respective Duels.

David Ragan, Ryan Preece, Austin Cindric and Kaz Grala are the open cars that will start the 500, the latter two starting 39th and 40th, respectively.

Ty Dillon, Garrett Smithley, Timmy Hill and Noah Gragson will not race in the Sunday event.

Drivers currently going to a backup car for Sunday and therefore losing their set starting lineup include Byron, Cole Custer, Ross Chastain, Grala, Brad Keselowski, Anthony Alfredo and Chase Briscoe. Additionally, Erik Jones and Martin Truex Jr. will go to the rear of the field as announced by NASCAR on Saturday.