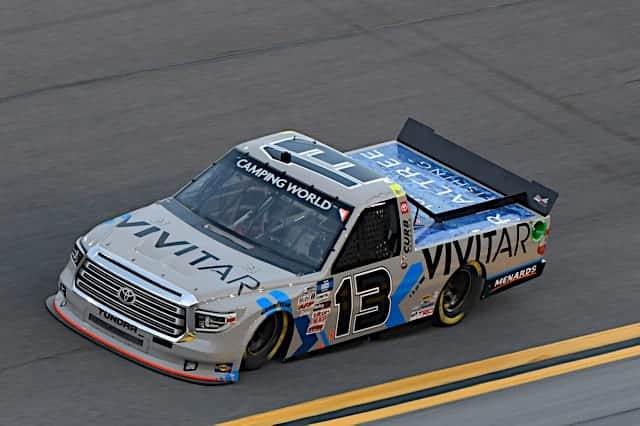 Johnny Sauter is the fastest trucker in Daytona.

The Wisconsin native posted a speed of 180.79 mph, good enough to start on the front row alongside last year’s Truck champion Sheldon Creed who clocked in at 180.29 mph in his No. 2 Chevrolet.

Grant Enfinger, Chase Purdy and Raphael Lessard round out the top five starters.

James Buescher‘s time was disallowed after he crossed the double yellow line attempting to get a draft from a Hailie Deegan‘s truck who was slow on the apron after she had already completed her lap. Buescher has to use the past champion’s provisional to claim the final spot on the grid.

Clay Greenfield was slated to be the first qualifier on the track, but his Toyota failed to fire on the gird. Once the 36-year-old finally did get on track, the No. 68 lost power on the high banks before he could post a time. Greenfield had to rely on owner points to get in the field and did not qualify.

Tim Viens was also not so lucky. The 44-year-old did not post a time either after the entire drive shaft of his No. 83 Chevrolet fell out of the truck on pit road. With not enough owner’s points, Viens did not qualify to race.