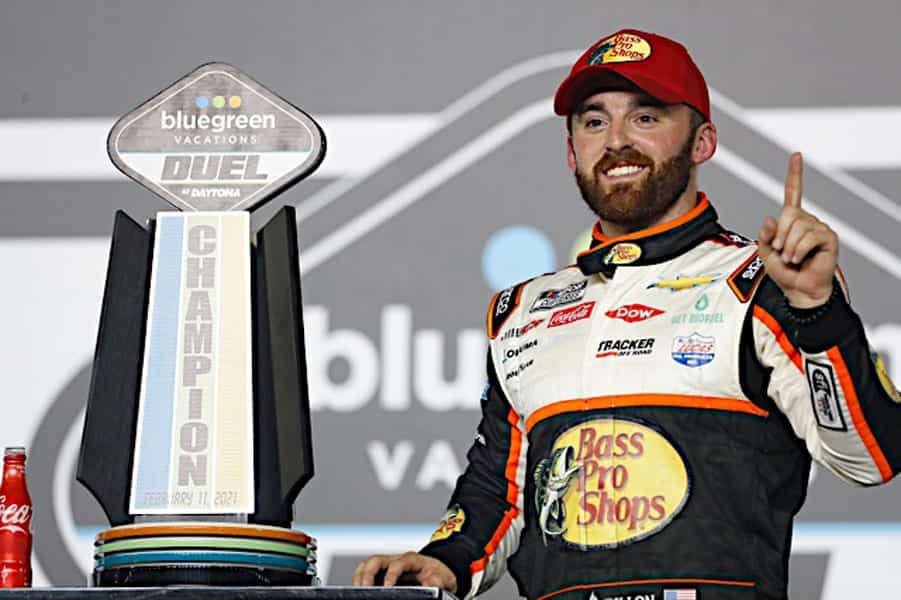 CHECKERED FLAG: @Aric_Almirola battles back on the final lap to win #BluegreenDuel No. 1 at @DAYTONA! pic.twitter.com/4HpGUwUcTw

CHECKERED FLAG: @austindillon3 makes a late move on @BubbaWallace to win the second race of the #BluegreenDuel at @DAYTONA! pic.twitter.com/esd5ZrT5eb

Almirola asserted his dominance from the jump in the first race. Starting on the outside of the front row, he was pushed to the lead early before chaos arose throughout the three-wide field.

It was so chaotic, in fact, that Denny Hamlin dropped to the back out of harm’s way.

The No. 10 took over the lead as the field went single-file before green flag pit stops. Prior to the rest of the field pitting, pole-sitter Alex Bowman went to pit road with a possible engine issue.

At the time of this writing it’s still unclear if the No. 48 will change the engine and subsequently relinquish the first starting spot in Sunday’s race.

Over the course of three laps, all three manufacturers made their stops. The Ford camp came first, followed by the Toyota and Chevy groups. All appeared to be clean on pit road entrances and exits, but a speeding penalty on Austin Cindric looked like it would cost him a chance to qualify for his first Cup race.

Almirola cycled back to the lead as the field remained single-file until the final few laps of the race. Logano made a swift move to get alongside Almirola and appeared to be in position to steal the win, but Bell chose to push the No. 10 to victory rather than the No. 22.

Cindric, who was one lap down after the penalty, made the race on his qualifying speed after Preece edged Ty Dillon at the line for fifth. Cole Custer also went for a spin deep in the field on the final lap and will move to a backup car.

Cole Custer goes around and into the wall late in Duel No. 1. pic.twitter.com/kzbgSWgjMv

Following a lengthy rain delay, the second race began after 11 p.m. ET, and it was worth the wait. Unlike the first Duel, much of the late race was spent two- and three-wide. William Byron led the majority of the early portion, with Dillon, Wallace and Harvick also mixing it up near the front.

With 25 to go in the race and green flag stops just moments away, Chase Briscoe lost it and triggered a four-car incident involving Anthony Alfredo, Kaz Grala, BJ McLeod and Garrett Smithley.

Chase Briscoe goes around a triggers a multi-car crash during Duel at Daytona No. 2! pic.twitter.com/AKvikXnXwe

The caution eliminated the potential danger of green flag stops. After the restart, drivers continued to run side by side and were clearly not content to just tick off laps.

Martin Truex Jr. and Harvick worked their way past the Chevys and into control of the race before the second and final wreck of the night occurred further back in the field. Smithley shot below Noah Gragson in an attempt to secure the final transfer spot but collided with Brad Keselowski. Byron and Ross Chastain were also involved and will go to backup cars.

On the green-white-checkered restart, Truex was in control until getting stuck in the middle lane and allowing Wallace to take over entering turn three. Unable to block the hard-charging run from Dillon exiting turn 4, Wallace nearly lost control but was able to hold on and safely finish second.

Take another look at how @austindillon3 got it done to take home a #BluegreenDuel ? at @DAYTONA! pic.twitter.com/bOYtHxhUxe

Almirola is always a factor at superspeedways, and Sunday should be no different. He completely controlled the first race Thursday, leading 52 of 60 laps. Despite having just three top 10s in 18 Daytona starts, Almirola often runs better than that. It could be redemption time for the 2018 Daytona 500, when Austin Dillon spun him while leading on the last lap.

And wouldn’t it make sense for another team with Tampa ties to win a big event?

As if last year’s win at Texas wasn’t enough, Thursday was further evidence that Dillon can wheel it. Many criticized him for getting the famed No. 3 because of his grandfather (team owner Richard Childress), but he’s proven himself as a capable driver, and especially in recent years. He was in the mix all night Thursday and made an impressive pass for the win. The car is certainly a contender to win on Sunday as Dillon looks to win his second Daytona 500 victory.

Wallace didn’t win the race, but he looked as strong as anyone in either race. Don’t let his displeasure after the race fool you – Wallace has a legit chance to win in his first start for 23XI Racing Sunday. He was able to put his car wherever he wanted it for most of the night, including making hard charges from the back when we got shuffled out. With full support from the Joe Gibbs Racing armada (and his boss, Hamlin), Wallace is a solid bet to win.

"I've got some learning to do." @BubbaWallace reflects on his P2 effort in #BluegreenDuel No. 2. pic.twitter.com/4YfLAyTsI8

Bowman and Byron both had a disastrous evening. Greg Ives and the No. 88 crew are going to run more tests to determine if he has to change engines and start in the back, so all hope might not be lost. Still, this is not the way you want the Duel to go when you secure a front row starting spot. Starting in the back won’t kill his chances, but there’s more something special about leading the field to green in the Daytona 500.

Byron, on the other hand, is going to a backup car after being involved in a wreck late in the second duel. He was riding around toward the back and still couldn’t escape the madness at the end of that race.

The Duel definitely wasn’t the debut Briscoe wanted. In his first Cup race, Briscoe caused the first caution of the night and succumbed to a 14th-place finish, two laps down. The worst part of it all is that he didn’t get a ton of real practice racing in the pack on Thursday. He’ll have his work cut out for him in his first start.

The rule for open drivers getting into the Daytona 500 has to be adjusted. The situation with Ty Dillon and Cindric just didn’t make sense. This has been the rule for plenty of years now, but that doesn’t mean it shouldn’t change.

The emphasis should be on the racing (Duels) rather than qualifying. I’m fine with rewarding the two fastest qualifiers because it gives the guys at the shop some props. Beyond that, though, the highest finishers should make the big show. If one driver can finish sixth and the lap down driver makes it over him, how is that system fair? It simply isn’t.

All of us down here scratching our heads over that rule. ?

I’m confused how this happened. https://t.co/rrfsMoYMIg

Manufacturer loyalty will be on full display Sunday. Duh. That’s always the case; Thursday’s races just reemphasized it. In the first race, all three manufacturers pitted together on separate laps. Each group stuck together in the draft until the very end of the race. Getting in line with friends behind you will likely decide who wins on Sunday.

Paint scheme of the race(s)

In the first race, Daniel Suarez’s No. 99 iFly Chevy stood out. The sponsor and the team are both new to NASCAR, and they both made a strong entrance into the sport with this red, white and blue scheme.

The second race had a number of good looks, but Austin Dillon’s No. 3 Bass Pro Shops Chevy caught my eye. You can’t go wrong with a black No. 3 car, and mixing in some signature Bass Pro Shops orange along with a trip to victory lane made this the perfect look.

The top 10 finishers in each race earned stage points that count for the regular season standings. With that, Almirola and Dillon are tied atop the standings with 10 points each. Even though neither winner is locked into the playoffs and neither received a playoff point, it’s still a great way to kick off the season with 10 points before taking the green flag Sunday.

Another nice recap, Logan. I didn’t see the 2nd race until this morning, but was glad I recorded it. The move Dillon made was impressive, and he got a heck a push from Harvick. I really thought Truex and Rowdy would team up and make a run for the win, but Truex got shuffled out of the draft. Bubba surprised me; his car was stout, and he came close to an amazing upset win. He will be a factor on Sunday. Hope the weather cooperates this weekend, but I’m not optimistic.

I have to admit I was impressed with two drivers for whom I have not had much respect. Austin Dillon and Bubba Wallace ran great races and should be considered among the favorites for the 500. I also think Kyle Busch has shaken off last year’s doldrums and looks good again. HMS won the front row Wednesday night, but Byron and Bowman lost a lot of that sparkle within about 28 hours.