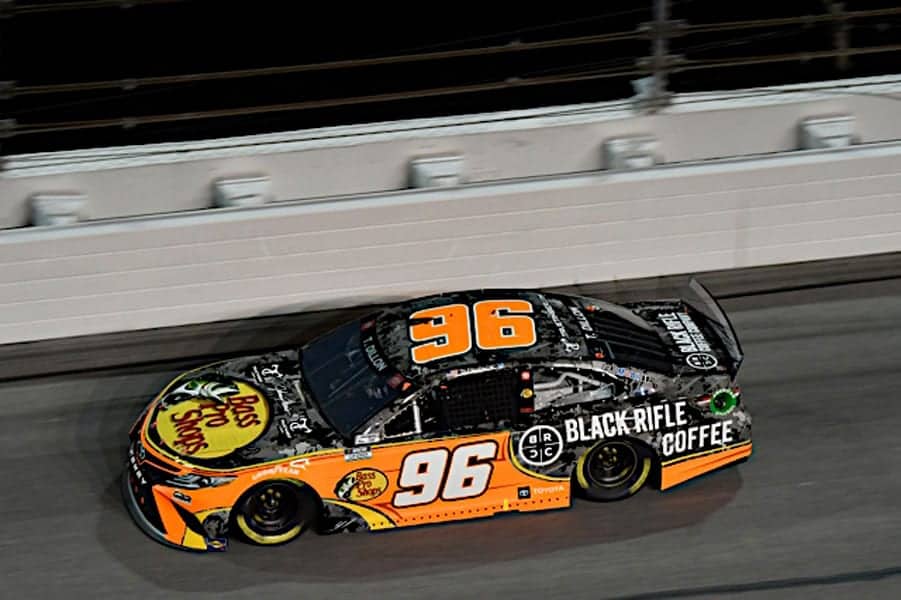 It was a tale of two Bluegreen Vacations Duels at Daytona International Speedway. Duel one was a calm, caution-free affair. Duel two featured two cautions and included three of the four open teams being involved in those cautions. It resulted in both drivers that were already locked into the field racing their way into the field.

The Daytona Duel races emphasize the thrill of victory and the agony of defeat. The latter was certainly on display at Daytona on Thursday night (Feb. 11) as heartbreak befell four drivers whose attempts at making the Daytona 500 were dashed: Timmy Hill, Garrett Smithley, Noah Gragson and Ty Dillon.

There are four open positions in the Daytona 500 field. Two of those spots go to the two fastest drivers from qualifying not already qualified into the field. Then in the Duels, one car from each race earn a spot. That meant four cars were trying to race their way into the Daytona 500 in each Duel race.

The race went caution free, and as it came to its conclusion, Dillon and Preece were battling for the final open spot in the field. When the white flag flew, Dillon was in the transfer spot, with Preece close behind. Hill and Cindric found themselves in the draft but were a lap down due to pit strategy. That made it a two-car battle for the transfer spot with one lap to go.

Coming into turn 3 the field began shuffling, and coming off of turn 4, Dillon shot to the bottom of the track while Preece remained in the high lane. As the field crossed the finish line Preece got a great run from the draft of Ryan Newman and beat Dillon to the line by a fender to transfer into the Daytona 500. Preece finished in the fifth spot, while Dillon finished sixth. For Dillon it was the highest finishing position of any driver in a Duel to miss the Daytona 500.

Preece had already locked himself into the Daytona 500 field via his qualifying speed Feb. 10. However, since he raced his way into the event it opened a spot for the next fastest open team from qualifying to make the Daytona 500.

That time belonged to Cindric. Cindric’s run in Duel one was looking solid until he sped on pit road during the lone pit stop of the event. The No. 33 Ford had to do a pass-through penalty that cost him a lead-lap finish.

From that moment on, Cindric needed help to make the Daytona 500, as racing his way into the event was no longer possible. Preece provided that help, and it resulted in Cindric making his first Daytona 500. He will start in the 39th position on Sunday.

The other driver who suffered heartache in Duel one was Hill, driving the No. 66 Ford of MBM Motorsports. He qualified 39th on Wednesday and seventh of the eight open cars, so his only shot at transferring into the Daytona 500 was to race his way into the event in his Duel race.

Hill found himself in the top 10 early but got off sequence on pit stops and was without a drafting partner. He fell off the lead lap and needed a miracle in the closing stages to make the 500. He finished 19th but was still grateful for the opportunity to qualify for NASCAR’s biggest race.

Unfortunately we have come up short on making this year’s #DAYTONA500. The disappointment has already set in but I’m extremely honored to have another shot at making the best race in the world. Congratulations to the teams that have made this race, it is an incredible feeling.

Duel two featured more of the same, the thrill of making the Daytona 500 and the disappointment of missing it. The second race was delayed by over two hours due to rain, but around 11:15 p.m. ET, the race began, and the fans who waited saw a great show.

There were four open teams in the race as Ragan, who timed his way into the Daytona 500 on Wednesday night, Grala, Garrett Smithley and Noah Gragson were all racing for the final transfer spot in Duel race No. 2.

The first 33 laps of the event were clean and green. It looked to be shaping up to be an interesting race as pit stops were approaching. On lap 34 Grala got involved in an accident when Chase Briscoe got loose and turned sideways.

Grala was able to continue, but his No. 16 Chevrolet was heavily damaged. It looked like his shot at making the Daytona 500 was slim. However, a lap 56 incident changed the course of the event and provided Grala with a lot more hope.

In that incident, Smithley and Brad Keselowski made contact in the middle of the field that sent Keselowski’s No. 2 Ford spinning. Keselowski’s car spun toward the outside wall and into Gragson’s No. 62 Chevrolet Camaro. Gragson slammed into the wall, collecting many others, including Ross Chastain and William Byron, in the process.

Racing for the final transfer spot in the #Daytona500… a crash collects @GarrettSmithley, @NoahGragson, @RossChastain, and @keselowski. (Via @NASCAR) pic.twitter.com/wD7l9qSqxL

The accident ended any hopes Gragson had at making the Daytona 500. The Beard Motorsports entry failed to make a qualifying lap on Wednesday night after failing inspection three times. That put Gragson in a situation where he had to race his way in and could not fall back on his qualifying time. The accident ended Gragson’s dream of running in his first Daytona 500.

Smithley, meanwhile, was able to continue but was extremely off the pace. His No. 13 Trophy Tractor Ford had substantial damage on the right side of his car. His qualifying lap on Wednesday was not good enough to transfer, so the only way he would make the Daytona 500 was to race his way in. The accident made that feat nearly impossible.

When the race restarted for NASCAR’s overtime only one open team didn’t have significant damage and was still in the race: Ragan. He played it conservative all night by hanging out in the back and avoiding wrecks. He locked himself into the Daytona 500 on Wednesday by posting the second-fastest qualifying time of any open team and was now in the catbird seat to race his way into the event. He did just that finishing in the eighth position. Grala ended up in 15th, with Smithley coming home 16th and Gragson 18th.

Like Preece earlier, Ragan’s performance in his Duel locked in the next fastest car from Wednesday night’s qualifying that was not already locked into the field. As a result, Grala, who was fourth fastest of the open cars in qualifying, will start his No. 16 Chevrolet shotgun on the field Sunday in the 40th position.

In the end, both Duel races had similar results for open teams but with different ways of getting there. Both Ragan and Preece had locked themselves into the field via Wednesday night’s qualifying. Then they both raced their way into the field in their Duels resulting in the next two fastest cars getting in the field. Cindric and Grala have Ragan and Preece to thank for living their Daytona 500 dream.

Gragson, Hill, Smithley and Dillon, meanwhile, have to go home after a tough Thursday night in the Bluegreen Vacations Duels at Daytona.

Derrike Cope is in. Makes sense to me.