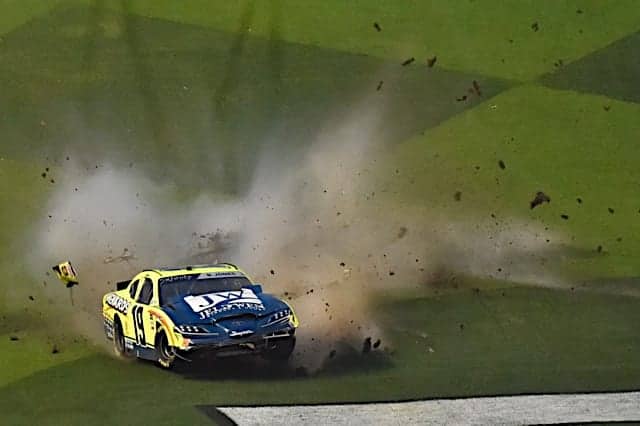 A wreck at the end of stage two in the NASCAR Xfinity Series’ season opener at Daytona International Speedway Saturday (Feb. 13) took out multiple drivers, including frontrunner Brandon Jones.

After winning stage one, Jones was in a strong position to gain additional stage points, leading three laps on the afternoon. But Jones’ top-10 run, at minimum, came to an end once he hooked Myatt Snider coming to the line.

Jones spun through the grass and tore up the front of his Toyota. As he came back up on track, Michael Annett and Riley Herbst narrowly avoided the No. 19, but Cody Ware and Alex Labbe were not so lucky, making contact with Jones.

All three drivers climbed out under their own power but are out of the race. They’re the first three DNFs of this 300-mile event.

With stage two completed, the red flag was brought out on lap 63 to clean up the track. It was the first major incident in what had been a clean NXS season opener up to that point.

Jones expressed his frustration once he climbed out of the car. He remains winless at this track in Xfinity, posting just two career top-five finishes in 11 starts.

“One of my best races I’ve run on the superspeedways,” Jones told Fox Sports 1. “I was trying to make some last-minute moves to protect myself and it didn’t work out.”

ROLLER: Cindric in position to start 2021 with back-to-back wins