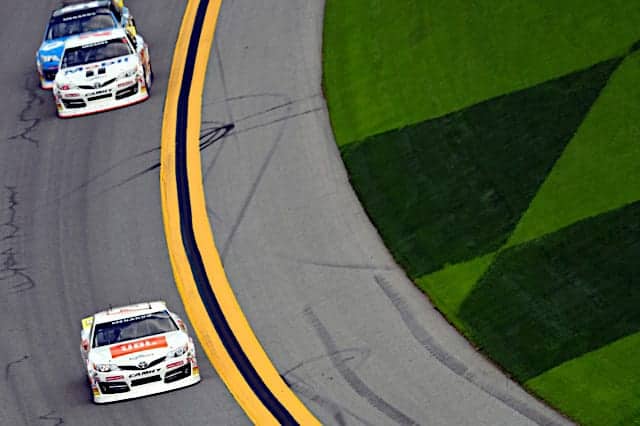 Saturday (Feb. 13) the green flag waved on the 2021 ARCA Menards Series season after a wet Daytona International Speedway morning. But for Corey Heim and Venturini Motorsports, it was like 2020 never ended.

Heim and Venturini won their second straight race, taking home the trophy in the Lucas Oil 200. Venturini as an organization has now won the last four Daytona season openers to kick off the ARCA season.

Teammate Drew Dollar, who finished third in the 2020 edition of this race, wound up second.

Heim, whose last win was at the Kansas Speedway season finale, gave credit to Dollar. “I trusted him and it paid off,” he said, parked at the finish line. The teammates stuck together in the closing laps, much to Gibbs’ dismay, and settled the race among themselves.

It’s Heim’s second ARCA victory, one that could be a game-changer with Daytona’s prestige.

“For the better only,” Heim said when asked about its meaning. “There’s only one direction I can go.”

Not only did the Venturini family dominate the race at the end, it also controlled the beginning. Teammates Dollar and rookie Gracie Trotter led the field to green, remaining in pace car formation most of the first half of the race. Trotter, though would eventually get caught up in two separate incidents and fall from contention. She wound up 23rd, four laps off the pace.

That left Dollar in position to work with Heim and challenge for the victory himself. But he reportedly lost power steering during the event and noted he didn’t have what it took to win after receiving some damage mid-race, wrinkling up the front of his Toyota.

There were three on-track cautions throughout the race, the first coming via a Thad Moffitt spin on lap 11 and a blown tire on the car of Scott Reeves late in the race, collecting Trotter, which sent the event into overtime.

In the day’s biggest incident, Derek Griffith spun in turn 4 on lap 28 off Trotter, who pushed Griffith aggressively to the front of the pack. Greg Van Alst, Nick Sanchez and Scott Melton were caught up in the chain reaction-type accident. Dollar received damage, being clipped by Griffith’s spinning car, but remained up in the lead pack throughout.

The ARCA Menards Series returns to the track March 12 at Phoenix Raceway.