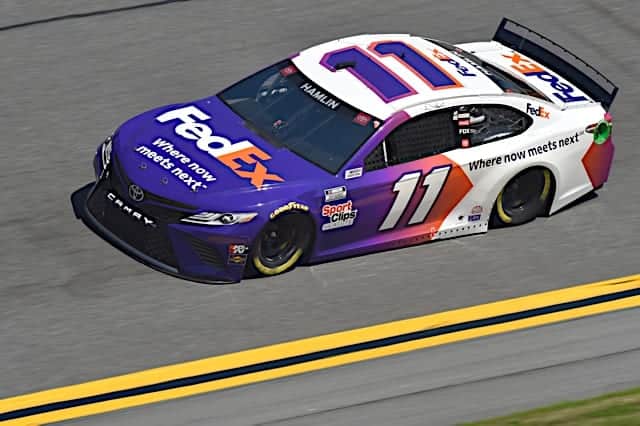 Unfortunately, the usual pomp and circumstance may be limited this year due to COVID-19. But in the world of fantasy NASCAR DraftKings, there’s still a lot of exciting things fans can interact with before and during the prestigious event for one of the best betting sites in the country.

For example, on DraftKings, there’s a $1 million contest you can enter, the first time the site has offered this large a prize amount for the Daytona 500. It also has higher payouts for both its Camping World Truck and Xfinity series contests this weekend.

Additionally, if you live in a state that allows sports betting, there are new options under the DraftKings Sportsbook banner. Finally, if you’d rather play for free, DraftKings is offering free-to-play pools that are also found in Sportsbook. You don’t need to be in a certain state to play these, as they are offered for everyone.

These free pools are “just a fun way to add some excitement or enhance your Daytona 500 viewing,” Pearce Dietrich, DraftKings lead NASCAR analyst, said in an interview with Frontstretch earlier this week. ”There’s a lot of different ways to heighten your TV watching experiences.”

In terms of rules for 2021, the site lowered the points for each fastest lap to 0.45, as well as the points awarded for first place to 45. DraftKings has also put more emphasis on drivers who finish in the top 10 and top 20. For example, the gap between 10th and 11th place is now two points instead of one: 10th gets 34 points, while 11th gets 32.

You can view the full DraftKings rules below for the upcoming season.

Though the scoring has changed slightly, Dietrich says it’s still “pretty simple for the most part: finishing up front, it’s place differential so advancing your position throughout the race, leading laps and in fast laps” are key to success.

After talking with Dietrich, I feel like the new rules probably won’t change your strategy, especially for the 500.

Here’s who am I looking to roster for this race.

There’s really no one else who should be at the top of your list. Hamlin has won the past two Daytona 500s and is looking to make NASCAR history by winning his third in a row. The No. 11 Joe Gibbs Racing pilot also took the checkered flag during last year’s playoffs at Talladega Superspeedway to make it two wins in his last five pack racing starts.

Dietrich also likes Hamlin for his superspeedway abilities. When the DraftKings guy likes him this much? Chances are he should be first pick on your roster selection.

“Denny Hamlin is the best restrictor plate racer, period,” Dietrich said. “Maybe not ever, but he’s getting close to that spot. If you just look at the Duel race the other night, when the race was starting to get dicey, he had no problem just sliding to the back. Ten laps or so later, the race calmed down and a couple of laps later, Denny Hamlin was right back up at the front. Not very many drivers can just quietly get out of trouble and then quietly get right back to the front. That’s a skill that very few have, and having that skill is going to be a big deal on Sunday.”

Hamlin will start 25th for this race, so he can earn position differential points on DraftKings if he wins or earns a top 10 (which is highly likely). Make sure to start him.

Hamlin isn’t the only skilled pack racer; Blaney, too, has done well in recent years. He ended runner-up in last year’s 500 and was sixth in the summer Daytona event. Blaney’s also won at Talladega in fall 2019 and cashed in again last June.

Blaney’s Team Penske buddies tend to work their way to the front, too, leading laps, though Joey Logano and Brad Keselowski’s aggressiveness often lead to early exits. If Blaney can work well with these Fords once again, look for him to hang around near the front and be there at the end.

DiBenedetto is also part of the Penske family, driving the No. 21 Wood Brothers Racing Ford, and can work well with the Nos. 2, 12 and 22. His history at Daytona hasn’t been all bad, either; DiBenedetto has three career top 10s, all while racing for underfunded teams. The most recent one came in summer 2019 when he earned an eighth-place finish after starting 25th.

Though DiBenedetto hasn’t been flashy at the Daytona 500, he did lead a race-high 49 laps two years ago before crashing out on lap 190. Slated to start 23rd on Sunday, he’ll be a good option for your DraftKings lineup so long as he doesn’t crash in practice and head to a backup car.

I wasn’t initially high on Chastain, as he sometimes tends to make more risks on track. However, after my interview with Dietrich, I feel more comfortable with playing the young talent, making his debut behind the wheel of Chip Ganassi Racing’s No. 42.

“He’s got really good equipment,” Dietrich explained. “He’s very affordable; he’ll fit into just about any lineup you build at DraftKings, and he’s starting in the back. He has a great opportunity to score place differential points.

“We’ve seen him win plate races in the Xfinity Series, so he knows what he’s doing. He has the experience, he has the car and he’s in a starting position that allows him to score a lot of points.”

Dietrich is absolutely right; I couldn’t resist a 34th-place qualifying position. The kicker for me is in almost every race Chastain has run at Daytona in Cup, he’s gained positions on track. That’s especially true in the 2019 Daytona 500, where he finished 10th, and last summer’s event that ended with a 16th. He’s also won in the NXS here, driving to victory lane in 2019 for Kaulig Racing after leading 49 laps.

Don’t be afraid to roster Chastain.

Many are focused on Ryan Newman at Roush Fenway Racing. But how about his teammate? Buescher has done a fairly nice job at this Florida track, though he hasn’t finished four of his 10 career starts. Last year, though, he finished third and ninth in his first Cup season with RFR. That built upon a pair of fifth-place results he had with JTG Daugherty Racing at this track a few years earlier (2018).

Add in a sixth place last summer at Talladega and it’s clear Buescher’s salary is way too low for these kind of stats. Starting 22nd Sunday, this underdog will produce a good DraftKings score in your contests if he keeps the nose clean and avoids carnage.

There’s a few reasons why I like Briscoe. First, his DraftKings salary is fairly inexpensive, so you can fit more higher-priced drivers in your lineup. Second, the Cup rookie is starting near the back, so even though he has to drop to the rear due to an engine change, it won’t affect his DraftKings points as much (unless he crashes on the first lap). Third, Briscoe earned a top five in both NXS races last season and even led 27 total laps at this track.

Briscoe’s new Stewart-Haas Racing teammates, Kevin Harvick and Aric Almirola, have very fast cars. Almirola won the first Duel Thursday, while Harvick came close in the second. If Briscoe can stay out of trouble, link up with his teammates, and survive to the end, he could be a sneaky good play in your DraftKings lineup.