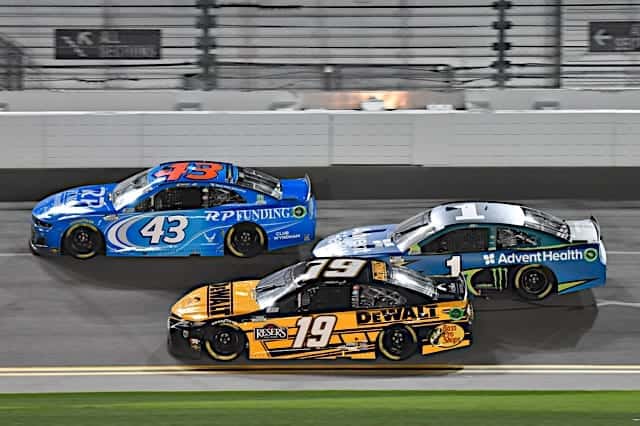 Two more Daytona 500 entries will start the 2021 NASCAR Cup Series season from the rear of the field on Sunday (Feb. 14) at Daytona International Speedway.

Joe Gibbs Racing’s Martin Truex Jr. and Richard Petty Motorsports’ Erik Jones will fall to the back prior to the green flag for the Daytona 500. Jones will also begin next weekend’s Daytona road course event from the tail end after a larger violation.

Jones, who qualified 31st, will be running the Daytona 500 after an engine swap, which usually sends a driver to the rear of the field if one is made after a qualifying session. According to NASCAR, Jones’ No. 43 team violated a section of the NASCAR rule book that if an engine swap is made in a primary car after competing in the Duels at Daytona Feb. 11, the team is to move to the rear of the field for the start of both the Daytona 500 and the following week’s race.

Truex, who qualified 26th for his 16th Daytona 500, had a radiator/oil cooler change. He will have to work his way through the field to attempt a win after a second-place finish in this race back in 2016.

Jones and Truex will join seven other drivers who have pulled their backup cars out of the hauler for Sunday after issues in Thursday’s Duels. The others include William Byron, Cole Custer, Ross Chastain, Brad Keselowski, Chase Briscoe, Kaz Grala and Anthony Alfredo.

Check out the full starting lineup for Sunday here.