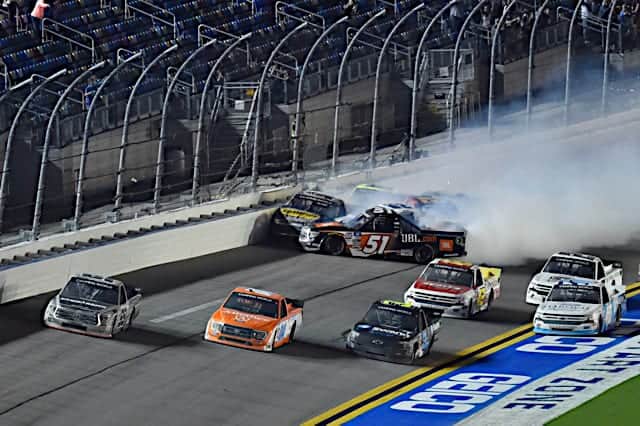 A caution involving 10 trucks with just four laps remaining set up the overtime finish that gave ThorSport Racing a victory in its first race after swapping from Ford to Toyota during the offseason.

Rhodes may have been the one celebrating in victory lane, but Anderson and Roper nearly stole both the show and season-opening headlines.

Roper restarted third on the overtime finish and slapped the outside wall after a hard push from Sheldon Creed. But despite the contact, the driver of the No. 04 Ford didn’t let up, making a move to the inside that ultimately gave him the lead on the white flag lap.

He still had it coming off turn 4 until a hard-charging Rhodes picked the right line at the right time, beating Roper to the line by one-tenth of a second. Still, third marks a career-best finish for the 43-year-old, whose previous high was a ninth-place run at Texas Motor Speedway last season.

“I wish I had another shot at that, but you gotta be grateful for what you’ve got, we’ll take it, move on and build from it,” Roper explained following the career-best run. “Anytime you can have a great finish like this and be able to bring funds to better your equipment, it’s huge. To get started off the year with a good points night is a lot easier than trying to catch up from a bad night.

“The difference between last year and this year is we’re trying to build a team, get our shop completed. We were able to get quite a few good runs last year. We just had some bad luck.”

Interestingly enough, Roper nearly didn’t make the field and was the last one to qualify for the race on speed. Instead, he nearly scored his first career win and had plenty to smile about heading into next weekend’s race at the Daytona road course.

Meanwhile, Anderson, who’s running a part-time schedule in the Truck Series while racing full-time in Xfinity, restarted 10th for the overtime finish. A combination of wrecking drivers and runs toward the front gone wrong opened up the track for Anderson to repeat his runner-up result from 2020.

“My whole life, having to fight and claw for everything that we have, all the partners and sponsorship that we’ve been able to put together and the people that have jumped behind us, to just be here on this national stage is so special and means so much,” Anderson said while beaming as if he’d just won the race. “You asked me how I can get excited about it, just being here is exciting; to have an opportunity to race in NASCAR, the Camping World Truck Series, to be here in the series and compete is amazing enough.

“I think I’m most happy because we were, a month ago, so close to shutting down our Truck team. To come that close again to winning one of these things, the whole last lap is a blur.”

The driveshaft just completely fell out of Tim Viens' No. 83 as they were pushing it on pit road.

what a night for @NieceMotorsport! felt good to put the @MarquisSpas hot tub time machine up front! #p4 #nevergiveup #LFG

.@JHNemechek scored a stage win and brought the #FireAlarmServices Tundra home in seventh. He explains his night at @DAYTONA: pic.twitter.com/9hEwoimk0Z

Racing at @DAYTONA was a learning experience for @DrewDollar00. He explains his night in the No. 51 @JBLaudio Tundra: pic.twitter.com/yCtf9LxcAx

It's been a tough night for Kraus.

We're pretty proud of this camera work, though.

After qualifying 12th, Hocevar quietly stayed out of the trouble throughout the race and put himself into position to open up his rookie season with a fifth-place result. In his previous nine Truck starts, he had a best finish of 12th at Dover International Speedway last season.

We should all try to approach every day with Jordan Anderson's energy and optimism.@j66anderson | #DAYTONA pic.twitter.com/qtA6J8T54P

Unbelievable!! 3rd place finish for Cory Roper and @fly_alliance !! So close to a victory!

It hadn’t sunk in during this picture. I was frustrated we weren’t doing burnouts on front stretch, but it’s hit me now how big of this is for myself. I through a lot of great runs away last year, feels good to finally give Al Niece and boys there what they really deserve. pic.twitter.com/9yFBr8gdqr

I’m fine. Our Tundra is not. Thanks for everyone that supports us. Congrats to @ThorSportRacing teammate @benrhodes and all the guys on the 99! pic.twitter.com/J14MYOOXl8

Man. Frustrated is a understatement. Thanks to all the fans that came out and every @KBMteam @safelite for the support. Onto Daytona RC. P9. https://t.co/DCgH3eNH5h

What a night for @Rackley_WAR & @RackleyRoofing & #warshocks. Felt so good to run up front tonight. Everyone worked so hard to get to the race track with our Silverado! @ChadKendrick_ did a great job tonight. Thank you to everyone involved. See you next week!

We won the first stage, finished P2 in the second one and were involved in a race incident with 5 laps to go. The result does not represent tonight's performance – P23 in the end.

Thank you @canac_ca and @GMSRacingLLC. This kind of evening is exactly why we are working so hard. pic.twitter.com/orA6x7Q5RT

Up Next: The Truck Series stays in the Daytona area for the BrakeBest Brake Pads 150 at Daytona presented by O’Reilly on the Daytona road course. Creed won the series’ inaugural visit to the track last August. Coverage for the race begins Friday, Feb. 19 at 7:30 p.m. ET on FOX Sports 1.