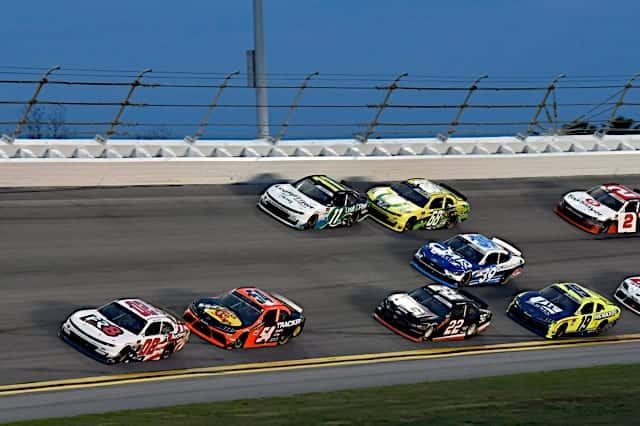 For the first two stages of Saturday’s (Feb. 13) Beef. It’s What’s For Dinner 300 at Daytona International Speedway, the NASCAR Xfinity Series field played nice with one another.

But in stage three, all hell broke loose, with the race’s complexion changing multiple times.

By the end of the race, it was reigning NASCAR Xfinity Series champion Austin Cindric who took the checkered flag after carnage reigned all around him. It took Cindric 14 races and five months to find victory lane in 2020, but in 2021, he has already locked himself into the NXS playoffs with his first career superspeedway win. It’s also Roger Penske’s first victory as an owner in the NXS race at Daytona.

Race day began with rain, leading to the cancellation of qualifying. 2020 owner’s points set the field, and it also meant that the grid was expanded from 36 starters to 40. With 45 entrants, that meant only five drivers were sent home compared to nine as initially intended. It’s not often that rain is a good thing in racing, but today, it was (except, of course, for those who missed after all).

The Xfinity package on superspeedways promotes strong runs and allows drivers to have the ability to move through the field. That said, drivers wanted to race early, and they were aggressive. On lap 18, Cindric led the field onto the backstretch with Riley Herbst in tow. Herbst moved up to the top line to block a run. Cindric moved up, too, but Herbst had the momentum, swiftly steering left and passing the defending Xfinity champion.

A restart occurred with seven laps left in stage one, and Herbst maintained control of the field, utilizing assistance from Ford teammate Cindric. With two laps to go, the top 10 had cycled to single-file racing along the bottom line, but it was the quartet of Joe Gibbs Racing Toyotas, led by Brandon Jones, who broke ranks and made a move for the lead. Herbst left the bottom line down the backstretch and went to block the Gibbs train, but to no avail. Brandon Jones made a move to the inside and beat Herbst to the line.

While many would consider single-file racing boring, it was nice to watch how, at times, the field had the decency to line up in a row and conserve its equipment for the final stage. After all, you have to make it to the end to have a chance to win.

Stage two ended with the first wreck of the race when Jones moved up to side draft Justin Haley. Once Haley moved to the left to follow those in front of him, Jones had to react. He clipped the front of Myatt Snider’s Chevrolet, sending Jones spinning through the tri-oval grass. The No. 19 Toyota lost its splitter, slid back up across the track and nearly collected Herbst. Herbst bounced off the outside wall, then collected Cody Ware and Alex Labbe, which resulted in each of them earning a DNF.

HAAS: Early strong run for Jones all for naught

Speaking of Labbe, it was a rough start to the season for DGM Racing in 2021. Team owner Mario Gosselin decided to bring four cars to Daytona, including one for himself. But with qualifying being washed out, Gosselin didn’t make the race.

Labbe brought of the first caution of the race on lap 3 when he spun off turn 4. He avoided the wall but was down a set of tires early. Shortly thereafter, teammate Josh Williams was responsible for the second and third cautions. On lap 10, he stalled on the backstretch with a flat left rear, claiming over the radio that “it felt like something broke.” Nine laps later, he spun off turn 4, falling out of contention for good. The fourth car, Caesar Bacarella, spun on the frontstretch with 21 laps to go although he avoided significant damage to the No. 90 Chevrolet.

Labbe finished dead last. Williams benefited from 18 cars retiring from the race to finish 21st, while Bacarella ended the race in 12th. Not exactly the start this underdog team needed, especially at a track like Daytona where they can utilize the draft for a quality finish.

After the accident ending the second stage, the race turned into quite the expensive wreckfest.

It all began with green flag pit stops, which are always tricky at superspeedways. When frontrunners made the move to pit on lap 75, Michael Annett was tagged in the rear by Chad Finchum. Annett spun toward the outside wall, collecting Jeffrey Earnhardt and Gray Gaulding, while Ryan Sieg and Colby Howard were also involved. Defending race winner Noah Gragson was in front of the crash, looking to pit. He aborted the attempt, but it was too late as Bayley Currey, who sustained damage from Howard’s spinning car, ran into the slower Gragson. The incident ultimately ended both their days and a nightmarish Daytona for Gragson (who DNQ’d for the Cup race Thursday).

Ty Dillon’s debut with Joe Gibbs Racing was going quite well, but all came to a crashing halt on lap 104 when Josh Berry‘s push led to Dillon receiving a run he couldn’t back out of. He split teammate Daniel Hemric and Cindric as they pack entered turn 3. However, Dillon couldn’t complete the pass on Hemric and tried to nab more real estate than the duo could share. Dillon spun across the nose of Hemric, and the slight contact between the new teammates triggered the Big One that claimed several good cars, including Justin Allgaier, Justin Haley, Herbst and Josh Berry.

While folks shouldn’t forget Dillon’s performance pre-crash, it may nonetheless be overshadowed by this accident. In hindsight, the move was early, particularly when he had two teammates in front of him, and perhaps Dillon should have been more of a team player at that moment. But for a driver who hasn’t stood in victory lane since 2014, one could only imagine how anxious he was. One also could not blame him when he had an opportunity to inch closer to the lead. Add in Dillon’s frustrating Thursday DNQ for the Cup race and the recipe for aggression was there.

JR Motorsports’ dominance in recent years at Daytona came to an expensive end in the 2021 edition. Annett and Gragson had their cars claimed by the junkyard during the lap 74 caution. Berry and Allgaier’s machines joined them following the accident caused by Dillon on lap 104.

The final caution occurred when Jeb Burton surged on the outside off the exit of turn 4 on lap 113. There was a hole on the outside that Burton pointed his Kaulig Racing Chevrolet toward. However, the hole closed rapidly, and Landon Cassill was the victim when his JD Motorsports with Gary Keller Chevrolet was hit in the right rear. Tommy Joe Martins was also collected when he spun. Both were stranded in the wet tri-oval grass and their days came to a premature end.

Some were surprised when, last fall, Dale Earnhardt Jr. revealed Josh Berry would get the opportunity to drive the No. 8 Chevrolet in 12 races in 2021. Berry hadn’t set foot in an Xfinity car since 2017, when he drove for NextGen Motorsports at Kansas Speedway.

But Berry found himself constantly running in the top 10 and later, in the third stage, was situated fifth as the field cycled around the track single file.

Most wouldn’t consider a JRM car an underdog machine. But for Berry, who had never made a start at Daytona or Talladega Superspeedway, his performance was impressive. Unfortunately, he caught up in the Big One on lap 104, which ended his night; yet again, the results don’t always tell the whole story.

Speaking of first-time starts on a superspeedway, let’s talk about Brandon Gdovic. He finished eighth in the No. 26 Sam Hunt Racing Toyota. Not only was it SHR’s best finish in the series, it was also Gdovic’s. Last July, on the road course at Indianapolis Motor Speedway, Gdovic earned what was then the best career finish for him and SHR, concluding the race in 12th.

Aside from earning career-best finishes, Gdovic also had a front-row seat to three major wrecks in stage three, avoiding all of them. Kudos to both he and this single-car team looking to gain a foothold in the series.

“I mean, I can’t get my hand out the window any further. I was waving him (Finchum) off down the backstretch and even checked up a little bit, just kind of slowing the rate of speed down into [turn] 3.” – Michael Annett

“Guys just trying to be overly aggressive, especially with that many laps to go. We knew business was going to pick up. … Unfortunately, guys try to make moves… veterans that know better, making dumb decisions.” – Justin Allgaier

The race proved to be yet another exciting installment for superspeedway racing in the NASCAR Xfinity Series. Cindric and Team Penske can’t be more excited, not just because of the win, but because the series now gets a shot at the Daytona road course next Saturday (Feb. 20). It opens the door for potential back-to-back wins from Cindric to open the 2021 season, and in the process, collecting lots of playoff points early.

Meanwhile, AJ Allmendinger, who now is a full-time driver in the Xfinity Series, undoubtedly has momentum after a fifth-place finish to open up 2021. He may pop up as Cindric’s early foil with a potential victory of his own at the road course.

Looking at the bigger picture, the larger field meant more drivers and teams could collect NXS prize money and owner points. There are six more races this season where the Xfinity Series will have qualifications, according to Fox’s Bob Pockrass (Circuit of the Americas, Charlotte Motor Speedway in May, Nashville Superspeedway, Road America, the Indianapolis Motor Speedway road course and Phoenix Raceway in November). In those races, only 36 teams will make the race. With so many teams wanting to run the full Xfinity schedule, however, maybe NASCAR should reconsider its decision to start fewer cars in those circumstances.

The Xfinity Series keeps the cable plugged into Daytona International Speedway for one more week. The series will turn 52 circuits around the 3.57-mile Daytona road course for the Super Start Batteries 188, beginning at 5 p.m. ET on Feb. 20 live on Fox Sports 1 and MRN. Next week will be the series’ second time on the Daytona road course, after schedule changes due to the COVID-19 pandemic last season led to it becoming a part of the schedule.

Last August, Cindric was the winner.

Ta ta, excuses already for Dillon. Justin put the blame where it belonged, without naming Ty. 7 years away from victory lane shouldn’t surprise someone knowing he’s making money on a name only. He knows, but you don’t.