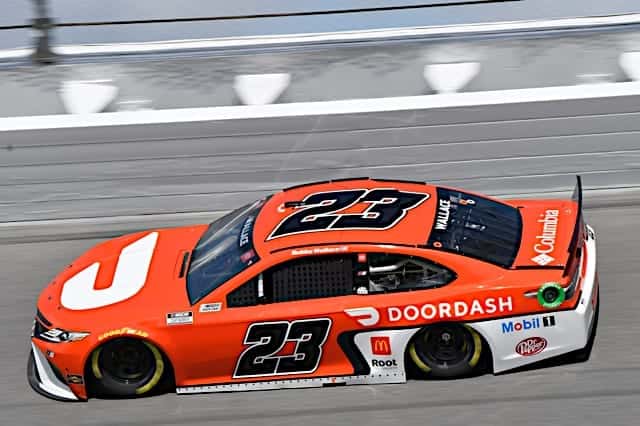 One of several teams in the garage making their NASCAR Cup Series debut, 23XI Racing didn’t start off Sunday’s 2021 Daytona 500 (Feb. 14) the way they planned.

The No. 23 Toyota Camry, driven by Bubba Wallace, failed inspection twice prior to the race before passing on their third attempt. According to Jeff Gluck on Twitter, the cars of Anthony Alfredo, Cody Ware, Erik Jones, Chase Elliott and Kevin Harvick failed initial inspection prior to getting through unscathed on their second try. Wallace was the only car to fail twice.

Wallace got a push from Joe Gibbs Racing’s Kyle Busch on the final lap of the second Bluegreen Vacations Duel on Thursday night, taking the lead and holding it through the final corners. However, Wallace was passed by race winner Austin Dillon on the exit of the fourth turn, winding up second and was slated to start sixth before the inspection failure. Instead, the No. 23 will drop to the rear of the field for the 63rd running of the Daytona 500, also losing a crew member as punishment.

Jeff Gluck of The Athletic reported the team made no major changes prior to the pre-race inspection issues.

Update: The No. 23 car passed inspection on third try. @MikeCWheeler says only thing they did was do a pit stop practice this morning just to make sure tires pull off OK. And this happened. He said he’s more embarrassed than anything. Car good now, but has to drop to rear.

The Cup Series season opener is slated to start shortly after 2:30 p.m. ET on FOX.