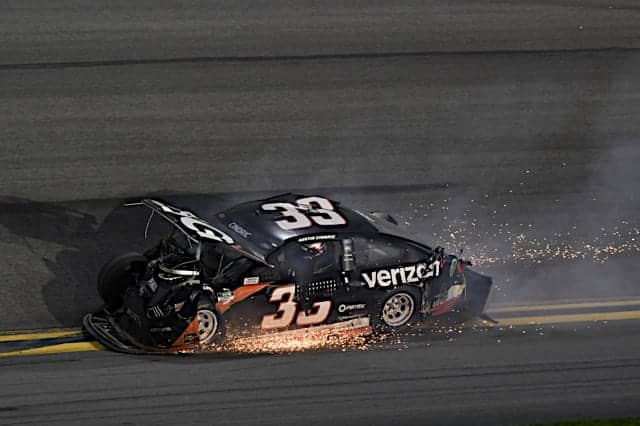 There were a lot of Valentine’s Day dinners ruined Sunday night (Feb. 14) by the Daytona 500 turned 24 Hours of Daytona Lite. A six-hour rain delay felt entirely preventable, the fourth time in the last 10 NASCAR season openers there’s been a rain delay. At what point will FOX, the sanctioning body and Daytona itself take a stand on a 1 p.m. start time?

That said, a 9 p.m. ET restart offered opportunity for redemption, early enough that people could still tune in before bed. So why did the audience struggle to tune back in? Maybe because NASCAR barely had more laps completed (15) than cars already out of the race (11).

It just so happened that the Big One, which plagues pack racing nine times out of 10, happened already on lap 13. Christopher Bell tapped Aric Almirola in front of the field and, all of a sudden, storylines just disappeared. So much for Ryan Blaney beating bestie Chase Elliott in a rematch; his race car was junk. Alex Bowman went from Daytona pole-sitter to his car looking like it hit a telephone pole. Popular Cinderella Matt DiBenedetto, Pitbull’s new car (Daniel Suarez), redemption story Ryan Newman … the list was a mile long. So much for casual fans of those drivers checking in after dinner.

But the wreck also took enough quality cars out of the draft to suck the life out of pack racing. By the final stage, just 17 cars or so were in contention; of those, just a handful were riding around with no damage. The early aggression caused a lot of conservatism, leading to single-file racing for laps at a time. Plus, with many multi-car teams missing half their roster, it meant drivers worked almost exclusively by manufacturer. That made teamwork worse than the four-car super trains we’ve seen here in the past; try passing five Fords in line down the stretch when there’s only 7-8 other guys with speed in the draft.

That left the race itself leaving plenty of excitement on the table, a series of single-file runs Frontstretch‘s Zach Sturniolo correctly defined by desperation moves made too late in each stage. Even with a surprise, underdog winner, the race never quite matched the high expectations produced by NASCAR’s current pack racing rules package.

It’s a shame because in 2020, some of the best Daytona and Talladega Superspeedway finishes were overshadowed by outside circumstances.

There’s an old saying you make your own luck and, sure, NASCAR has done its fair share of shooting itself in the foot. But these are big, crown jewel events, limited opportunities each year to build a new audience. That makes this stumble tough to swallow, especially when NASCAR officials have put together rules for quality racing.

TWO: Michael McDowell Makes A Name For Himself … Finally

Michael McDowell has won the 2021 Daytona 500. Just go ahead and digest that news again for a second. The journeyman driver, a 100/1 long shot or more at most betting sites, has a NASCAR career known for three things.

Before tonight, Michael McDowell was most remembered for a crash in qualifying in 2008 in which he miraculously walked out of the car pic.twitter.com/rlUDADwJtk

From S&P for many years to now the 2021 Daytona 500 Champion, Congratulations Michael Mcdowell pic.twitter.com/KMWyJbOU3n

The word “faith” defines McDowell over 14 years of hurdles and despair. Most men would have given up long before this moment, even in his current role at Front Row Motorsports. He’s always seemed a funded driver with sponsorship away from losing a full-time ride each year. At his best, he’s been aligned with a car typically 20th to 25th fastest on any given day.

But McDowell never gave up. He kept the faith, a devotion to his career made easier by how he lives life.

“Whether I win this race or not, it’s not what defines you. …” he said Sunday night. “You’ve got to have a bigger purpose than that.

“Just for whatever reason, I don’t know. I’m like, it’s going to happen [a victory]. I just know it is. I don’t know why I have that feeling. But I also feel like if I don’t come to the racetrack thinking like that, then why am I coming to the racetrack.

“Even when I was start-and-parking, I was like, man, one day I’m going to get a shot at it and I’ll be able to do it because of all this that I’ve put into it. I never lost hope of that. And when I come to the racetrack, when we load up and go, I really think every weekend, OK, this is the weekend it’s going to happen. And I know that sounds crazy, but I do, and I have, and I have for a long time.”

Denny Hamlin had the best car in this Daytona 500, leading a race-high 98 laps. The fifth-place finish was the best of any driver who’s attempted a historic three-peat in this race (besting Richard Petty’s seventh in 1975).

But Hamlin knows he missed an opportunity. He should have been first.

The No. 11 Toyota was leading the draft heading into the final round of green-flag stops. But when the manufacturer chose to pit together, there were just two other cars capable of running full speed with Hamlin (Kyle Busch, Bubba Wallace). Slower stops by those two left him a sitting duck, running alone as the draft just drove right by.

“We were too far out front,” Hamlin said Sunday. “We got on-and-off pit road too good. We came out in front of everybody, and didn’t have any help to get up to speed.”

You know who had help, even after those big wrecks? Ford and Chevrolet, because there’s so many of them. 18 Blue Ovals made this year’s 500, teaming up with 17 Bowties, while just five Toyota Camrys rounded out the field.

As manufacturer teamwork increases in NASCAR, it’s no surprise Toyota is finally talking to potential new team owners. This incident, along with Wallace’s strong 500, may be showing this manufacturer there’s a reward to expanding their tent just a little.

And if they did it during the 2020 offseason? Who knows? Maybe Hamlin would have won that 500 after all.

It’s always tricky to interpret how teams will perform beyond the Daytona 500. Pack racing is such a unique animal compared to the majority of other tracks on the schedule.

But the bizarre nature of this finish complicates that analysis even more. Does Wallace come out swinging after leading a lap in the 500 and flashing winning speed? Or does a near-miss in the Duel qualifying race, combined with a loose wheel late and then destroying his Toyota on the last lap, wipe out all momentum?

Bum end. I bailed out down the back saw the wreck happening and got run over from behind. Should’ve bailed sooner??‍♂️

Onto the right turns

And what about Austin Cindric? He’s the first defending NASCAR Xfinity Series champion since Kevin Harvick in 2007 to win that Daytona season opener. He then spent most of Sunday challenging to be the first driver since Rusty Wallace in 1980 to earn a top-five finish in his first career Cup start. That’s impressive company.

But Cindric struggled to get on pit road during his last stop, building on a speeding penalty in Thursday’s Duel qualifying race that could have cost him. Then, his No. 33 Ford ended up a mangled mess, a pile of flames in the last-lap wreck. So is 15th enough to turn heads?

Honorable mention here: Kyle Busch (surprise Busch Clash winner, Daytona 500 loser/underperformer … again). I remember Jimmie Johnson won the Busch Clash back in 2019. He wasn’t heard from the rest of the year. I’d place teammate Christopher Bell here, too (career-high 32 laps led Sunday, yet wrecked himself and bump drafted the start of the Big One).

Finally this week, it’s hard to ignore the ghost of Dale Earnhardt hovering over the sport on the 20-year anniversary of his Daytona 500 tragedy. Our Matt McLaughlin has an excellent article out today detailing Earnhardt’s transformation of the sport.

How did he make his presence known Sunday? 1990 Daytona 500 winner Derrike Cope, running his final Cup race, blew a tire on lap 3 and crashed out. That’s right … lap 3. A flat tire, the very thing Earnhardt suffered on the white-flag lap in 1990 that made Cope one of the most unlikely Harley J. Earl trophy winners in history.

Revenge from the grave? We’ll never know. But I do know McDowell was the third Cinderella-style winner since Earnhardt’s death (see Dustin Long tweet above) while the current driver of his No. 3? Austin Dillon? He led three times en route to finishing … third.

Wallace !!! Heck 11 cars out by lap 5. Only 17 cars in contention by end of stage one and some of them damaged. Wallace hasn’t changed, he’s still the guy who finished 22nd in the final standings last year. He’s still the guy who hasn’t ever won a busch or cup race. Only difference is that MJ owns half the team and chose the only driver who is half black to drive it. Name a joe gibbs satellite team that has done well. Relax, it’s early in the season, Nascar and fox will mess up the starting times more before it’s over.

Agree100%.
It’s not like Bubba hasn’t had good finishes at RP tracks in the past, it’s the other 32 races where he has problems.
Geez,

I have been harping about late starts for as long as they have used them. I’ve found out these networks just don’t much care what th fans say.

Umm….Have you forgotten about Furniture Row Racing? In the history of NASCAR I would venture to say that they are the best satellite team in history. All they did was win races and a NASCAR Championship.

A couple thoughts: First, it was nice enough that the underdog guy won, but it’s really not that surprising at either Daytona or Dega. Restricted racing is still mostly a crapshoot. And Michael DID start the final wreck by aggressively pushing Keselowski.

Second, I wonder how long Toyota plans to dink around with 5 cars. KBM develops drivers and then Toyota promptly loses them to Ford and Chevy. Now the Whiner-in-Chief Denny Hamlin is mad because he didn’t get more help and even goes so far as to blame the Chevy drivers. If you have as much clout as you say you do, Denny, get TRD to invest in more Toyota teams. Otherwise, shut up and train your lap dog to fetch for you better than he did on Sunday.

Just a note to compliment your writing style. Regardless of opinions, this is the best or among the best recaps of the race I read.