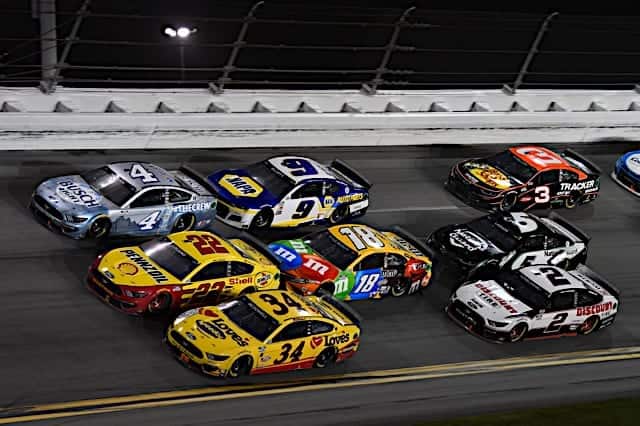 Last week, I discussed the biggest and most imposing winless streaks in the Daytona 500, past and present alike. Given what transpired in Sunday’s (and partially Monday morning’s) 2021 edition of the Great American Race, it seems somewhat fitting that a winless streak of a different variety was broken. Michael McDowell is the eighth man to have held aloft the most meaningful race trophy in their first visit to a winner’s circle, but he’s second highest in number of starts prior to picking up that initial win.

No one did it longer with less success than Michael Waltrip. The younger brother of a NASCAR legend, Waltrip seemed destined to be an also-ran. He had a few flashes of brilliance, winning the 1996 All Star Race and grabbing an occasional top-five finish every couple years. His opportunities were mostly with second tier teams. Prior to 2001, the best ride he had piloted was the famed Wood Bros No. 21, but even that team had fallen on tough times. Waltrip ran that car for three years and managed just a single top-five finish in a points paying event.

Which is largely why many people thought Dale Earnhardt was taking an immense leap of faith when he hired Waltrip to pilot his newly formed third Dale Earnhardt Inc team in 2001. Prior to his first start in the No. 15, Waltrip was 0-for-462. After that start, he was 1-for-463, winning the ’01 Daytona 500. He would go on to win three more races in that ride, including a second 500 two years later. While the events of the day certainly diminished a long awaited celebration, you simply can’t discount the significance of Waltrip’s first career win.

Speaking of the Wood Brothers Racing team, they endured a good bit more futility following Waltrip’s departure. Elliott Sadler did manage to score a win at Bristol in 2001, but that was the lone win in a span of nearly two decades. Then along came Trevor Bayne. Bayne was a 20-year-old who had barely begun to move the needle at the Xfinity Series level. He ran in that series for Roush Fenway Racing and landed a part time gig in the No. 21 Cup car. His first Cup start at Talladega in the fall of 2010 was barely worth a mention. His second in the 2011 Daytona 500 was barely believable.

Bayne had shown himself capable throughout Speedweeks that February, earning kudos from a handful of people for his ability to push other cars forward properly. He made an unofficial ally in Jeff Gordon, perching on Gordon’s rear bumper and shoving the 24 to one impressive move after another. Running near the front and missing one crash after another, Bayne inherited the lead when David Ragan was penalized for jumping a restart. Bayne led the final six laps en route to a stunning victory in just his second race.

Bayne has not added to his Cup trophy case since that day, but his win remains one of the biggest upsets in NASCAR history.

The number two has a much different significance to Sterling Marlin. Like Waltrip and McDowell, Marlin had hundreds of races behind him before scoring a first career win in the Daytona 500. What sets Marlin apart is that his first two career wins were both Daytona 500 victories. When Marlin jumped to the Morgan McClure team in 1994, they were already a competitive team at superspeedways. Not to mention Marlin had shown himself capable in the past. So the No. 4 picking up the win wasn’t a total stunner. But doing it again for win No. 2 is quite another story. McDowell will have an opportunity to match that feat next year, although I’m sure he’d rather not wait that long for another triumph.

McDowell led just the last lap, only the third time that a Daytona 500 winner finished the race with a total of one lap led. Even the most historically notable upsets in the race were drivers who led more than one lap. Tiny Lund, Pete Hamilton, Derrike Cope, and Trevor Bayne all led at least five laps when they reeled in their wins. The first time it happened? Kurt Busch led just the final circuit in his 2017 victory.

Kyle Busch once again struck out at Daytona. For a driver who wins so much at so many tracks, his record at the 2.5-mile trioval in central Florida is puzzling. The last lap crash that decimated his car pushed his number of DNFs in the last seven 500s to four, three of which were crash-related.

More bizarre yet, Busch has finished better than 14th just once in his last nine races on the oval. As has often been the case, Busch once again is relegated to waiting until next year.

Dale Jarrett was the last to perform the feat in 2000, and there’s no telling how long it might continue. Winning the pole at a superspeedway translates less to being successful on race day than it does at most other tracks, but it’s still remarkable that it’s gone on this long, especially given the impressive racing resumes that some of the pole winners in that span have had. Oh well. Maybe next year.

I am confused…
You state,,, “McDowell led just the last lap, only the third time that a Daytona 500 winner finished the race with a total of one lap led.” and then “The first time it happened? Kurt Busch led just the final circuit in his 2017 victory.”