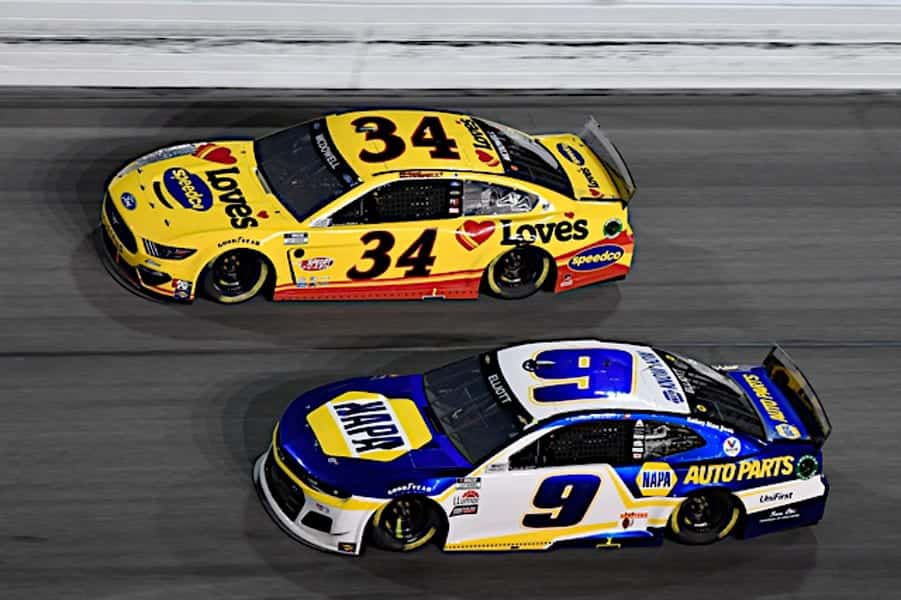 McDowell had been caught up in a 16-car pileup on Lap 14 of Sunday’s race (Feb. 14), causing minimal damage to his right front fender. But, as has been proven at Daytona International Speedway, a little tape never hurt anyone. The Phoenix, Ariz. native had not placed in the top 10 in either of the first two stages, but hung around the lead lap and positioned himself at the end. For the last 60 laps, a train of lead lap cars rode around the outside, with McDowell staying inside the lead draft most of the race.

The big break for McDowell came on the final round of pit stops. Each manufacturer pitted their lead-lap cars together and the Fords broke out ahead of both the Chevrolets and Toyotas. Suddenly, the No. 34 was inside the top five, part of a 1-2-3-4-5 Blue Oval freight train in position to settle the race among themselves.

The nerves began to shake and drivers began to get restless in the closing laps. As the white flag flew, teammates went out the window as each driver went for the Harley J. Earl Trophy. On the backstretch of the final lap, McDowell gave Brad Keselowski of Team Penske a hard shove. The push forced Keselowski to make contact with teammate Joey Logano, sending both drivers spinning and culminating in a fiery crash.

Retweet to congratulate Michael McDowell on his #DAYTONA500 WIN after a huge crash coming to the finish!@Mc_Driver | @Team_FRM pic.twitter.com/lTsyYF7Gxq

McDowell held off Chase Elliott and Austin Dillon before the caution lights flipped on to seal the massive triumph. After nearly a six-hour rain delay, multiple pileups, and even some fog, the night ended with the Underdog taking charge of Daytona’s house.

“All of my Ford partners out there, we had a good plan coming to the white and unfortunately, Joey and Brad got together and the hole opened up,” McDowell said afterwards. “I just can’t believe it.  I’m so thankful.  It’s amazing.

“So many years just grinding it out and hoping for an opportunity like this. God is good.”

The win is Front Row Motorsports’s third win as an organization and their first at Daytona.

Ryan Preece entered 2021 with a lot of uncertainty at JTG Daugherty Racing. He had no charter and 12 unsponsored races for the time being as the now-open team debates whether to run a full season.

Will they now after a strong Daytona Speedweeks? Preece was able to qualify on speed in Wednesday night’s Daytona Pole Qualifying, then followed it up by a fifth-place run in his Duel qualifying race. In the 500, the third-year driver came just short of a stage one win, finishing second to Denny Hamlin. Preece would then finish ninth in Stage 2.

The No. 37 seemed to be a presence at the front of the field all night long. In the end, he was rewarded with a sixth-place finish despite getting swept into that last-lap wreck. It’s the first Daytona 500 top 10 for Preece since his debut in 2019; keep in mind that last season, he didn’t earn a Cup Series top 10, period, for over seven months.

Despite a year that may be full of uncertainty, a top 10 at Daytona is certainly a way to get your name on the radar. Preece may have done just that as he tries to salvage his 2021 – and perhaps start auditioning for 2022 and beyond.

In another one-off start, Jamie McMurray nearly made the most of it. The Joplin, Mo. native was involved in the Big One on lap 14, damaging the nose and pulling the splitter up. The curved splitter was a aerodynamic hindrance, but McMurray was able to stay on the lead lap and remained relevant throughout the entire event. After losing the draft following late-race, green-flag pit stops, McMurray’s No. 77 Chevrolet teamed up with a few other cars to catch the rest of the pack. He snuck through the chaos on the final lap to earn an eighth-place result.

Right behind McMurray was Corey LaJoie, Spire Motorsports’ new full-time driver as the team expands to two cars for 2021. LaJoie was quiet for most of the night, but held on until the end to score a ninth-place finish, his second-straight top 10 in the Great American Race.

“You always want to be in position to contend for a win, but to finish ninth in my first race with the team is exactly what we set out to do,” LaJoie said afterward. “Good start in points and we’ll continue to get stronger over the course of the year.”

Austin Cindric made his debut in the Cup Series, running inside the top five or 10 for a large part of the race. A slow pit stop during the final cycle caused him to lose the draft, however, and he would be caught up in the last-lap crash to finish 15th. It was a learning experience for a rookie expected to run four-to-five races in Team Penske equipment while preparing for a full-time jump to Cup in 2022.

A call also goes out to Joey Gase, who was able to forge through much of the chaos and earn his first top 20 at Daytona. Rick Ware Racing as a whole made out well, putting three of their cars inside the top 25 while avoiding those expensive multi-car wrecks. (Derrike Cope was the lone exception, crashing out with a flat tire on lap 3 some 31 years after Dale Earnhardt’s No. 3 got a flat on the final lap, causing Cope to win the 1990 Daytona 500.)

The NASCAR Xfinity Series held its traditional race at Daytona on Saturday and there were no shortage of dark horses in that one. A late crash ended the night for many heavy hitters, providing an opportunity for the underdogs before Cindric came out on top. But give a call to Brett Moffitt, who nearly landed the upset win for Our Motorsports. The 28-year-old won stage two and came one spot short of earning his first career NXS win, placing second.

Brandon Brown continued his history of strong superspeedway runs with a solid sixth. Making only his 11th NXS start, Brandon Gdovic came home eighth after some masterful reflexes to avoid pileups. Jason White earned his second career top 10 with a 10th-place performance. Other drivers like Joe Graf Jr. (11th), Caesar Bacarella (12th) and Stefan Parsons (13th) were able to make the most of their opportunities.

The Camping World Truck Series nearly had an upset in its season kickoff on Friday night as well. Cory Roper had the lead coming through turns 3 and 4, but could not hold off the run from winner Ben Rhodes and slid to third at the finish.

For the second year in a row, journeyman Jordan Anderson came up one spot short of the victory. Both drivers were able to share a few smiles on pit road after the race. Carson Hocevar (fifth) and Codie Rohrbaugh (eighth) made a splash at Daytona as well, earning strong top-10 results.

McDowell has an opportunity to follow up his shocking win with an opportunity at the Daytona Road Course next week. The driver of the No. 34 Ford Mustang has a reputation to have a grip on tracks that carry right turns as well, running 10th at this track last summer.

In the Xfinity Series, drivers like Brett Moffitt and Alex Labbe should be two drivers to watch as they go for an upset win of their own. Labbe, who comes from a road course background, earned a top-five result at the Charlotte ROVAL in 2020.

The Camping World Truck Series also heads to the infield road course, with an opportunity for many underfunded teams to make a splash. Austin Wayne Self led the way for the dogs last season with an 11th-place result.

Just got home. Thank you for all the support! This @OurMotorsports team has been working hard to be the best we can be! The best is yet to come! ??

I’m so thankful for all of the hard work that the folks at @BMSRaceTeam have put in to build us such an awesome @TeamChevy!

I also can’t thank @Larrys_Lemonade enough for coming on board with us tonight! Time to head home and enjoy a couple ice cold @Larrys_Lemonades! ? pic.twitter.com/PVwNh6VNh4

Unbelievable!! 3rd place finish for Cory Roper and @fly_alliance !! So close to a victory!

8th and 9th for our guys in the #DAYTONA500 great way to start the season!