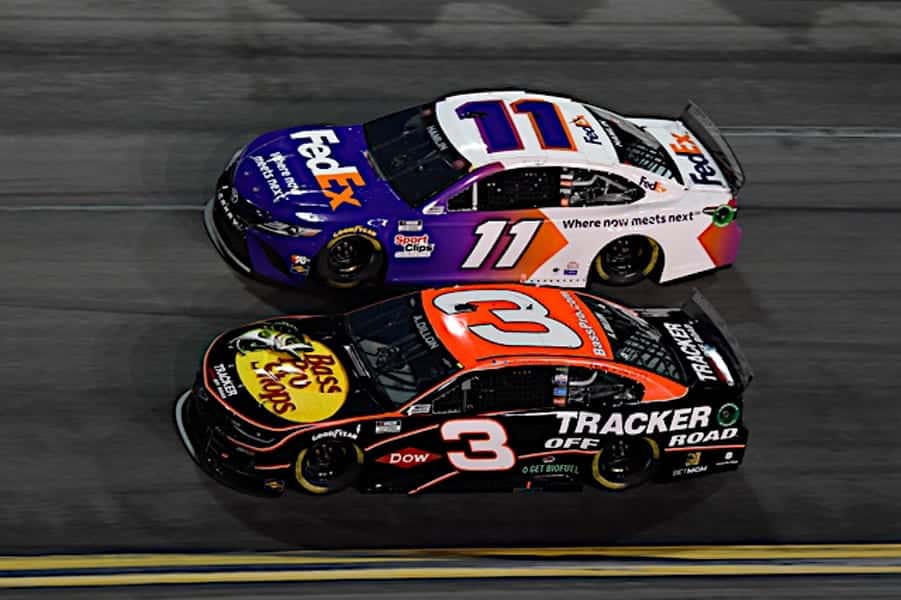 For most of Sunday night’s (Feb. 14) Daytona 500, the pack rode single file in hopes of timing their runs right.

Instead, last-minute moves left some drivers wadded up and others just short of victory in the 63rd annual Daytona 500 at Daytona International Speedway.

With the field thinned to just 16 cars on the lead lap in the closing 20 laps, too many drivers feared dropping out of line to work their way forward.

Superspeedway racing in recent years has featured many manufacturer alliances – Fords work with Fords, Chevrolets with Chevys and Toyotas with, well, whoever they can find because only five entered the race. But options were scarce after a lap 14 Big One collected 16 cars before the lengthy five-hour rain delay.

That meant fewer drivers to cohesively work together late to make a race-winning move any sooner than the final lap. That spelled trouble for most.

The Ford brigade of Joey Logano, Brad Keselowski and Michael McDowell led the field down the back straightaway on the white-flag lap. Ford counterparts Kevin Harvick and Cole Custer had been shuffled toward the rear, so the Chevrolets of Chase Elliott, Austin Dillon and Kyle Larson were left fighting side-by-side as the Team Penske teammates of Logano and Keselowski began to duke it out.

Contact between the two and with unintentional help from McDowell sparked a massive crash that sent McDowell to victory lane while Keselowski, Logano and others came back to garage on rollbacks.

So why didn’t the Chevrolets of Elliott, Dillon and Larson jump out sooner to break up the Fords? Time and fear of no return from the lack of momentum the bottom grove could provide.

“We definitely were trying to work together as the other manufacturers were as long as we could,” said Elliott, the second-place finisher. “The top was just so fast. There just wasn’t an option. Thursday night [in the Bluegreen Vacations Duels], there was an option for the bottom. A few good cars could make ground and you had options. But [Sunday], the top was just ridiculous and it made it where nobody wanted to pull out of line until the very last lap so that’s what you got there.”

Dillon, who finished third, was eager to find a way to work with Elliott but agreed the fear of jumping down from the top lane was a one-way ticket to the rear of the field. The 2018 Daytona 500 champion acknowledged, though, that losing “some of our bullets from the Chevrolet camp” early in the race played a role in what they moves they were capable of making late.

“We had gotten to a point where we were in position, and Ford had that front row,” Dillon said. “Just trying to wait as long as possible for them to start fighting for the win – and it kind of happened the way we wanted it to. We were really close. We had two Chevys finishing second and third, but a couple feet [short], both of us.”

Denny Hamlin, who eyed a historic third consecutive victory in the Daytona 500 and fourth overall, finish fifth after barely escaping the turn 3 calamity. Hamlin led a race-high 98 laps of 200 but was stormed past after a late round of green-flag pit stops left him a sitting duck, forcing him to find a way to work through traffic rather than defend from out front.

What Hamlin found, though, was a lack of willingness from his competitors to fight forward until it was too late. Hamlin understood waiting until the last lap of stages one and two to dart out and make a move. But with a Daytona 500 title on the line? Why wait?

“Selfishly speaking, I’m wondering what in the world – why are we running in a single-file line on the white-[flag lap]?” Hamlin said. “Tenth, 12th, eighth. Are you just happy with that finish? … Especially since there were really no Fords beyond about fifth or sixth. It was them and then everyone else, and I was surprised everyone else didn’t go.

“And I wasn’t sure who, whether it’d be Austin or Chase, but I don’t know. I tried to do everything I could from 12th. I kept pulling out of line and trying to side draft guys and trying to pick them off one by one, but I just couldn’t make it.”

Hamlin realized once he got to eighth that he could do nothing more than hope for a crash with two laps to go that would prompt a restart and another opportunity for him to pick through the drivers ahead of him. That opportunity never came before the race ended under yellow in the final set of corners.

So when was the right time to pull out of line and make the move?

Hindsight is always easy, as is typing from the couch as opposed to regularly making life-altering decisions behind a steering wheel at 200 mph. But with qualifying races to prepare for these situations on Feb. 11, coupled with two superspeedway races with this package last season, what lessons were or were not learned that could have told others to attempt moves sooner?

While a move could have sent someone from third to 13th, is that penalty too large when chasing a Daytona 500 victory? Only 11 cars finished on the lead lap, and an additional four should have if not for getting involved with the final-lap melee.

No move is perfect, and we can’t say so-and-so should have made the move with three laps to go with certainty it would have paid off.

But wouldn’t it have been worth trying?

i think the ones still racing on the last few laps knew what would happen, so they all just waited til the last possible point in the run to move. i also thought they didn’t want multiple g/w/c. i think by 12:30 eastern time they were just ready to be done. they just wanted to finish best they could without mayhem. ha…..nope they had the mayhem.

That race was every reason i didn’t renew my tickets to the Coke zero 400 at Daytona this year all rolled into one – rain, single file riding around, & finishing after midnight. And, no i didn’t any of the race after the first 15 laps cuz i had to be at work at 6 this morning.

Had they made a move sooner it would have just meant the wreck that occurred on the final lap would have occurred sooner, resulting in more restarts and more wrecks.

If the wreck was going to happen I’m happy it was when it did. If it would have happened a few laps earlier I believe Hamlin would have won if he wasn’t caught up in it. Didn’t want to see that. Green, white, checkered would have been a really benefit for him.

Agree! I did not want to see Hamlin win 3 in a row. Not a fan at all. All he has to do is open his mouth and it’s a turnoff for me.

I think the fact that there were only about 15 cars in the lead pack (if that) made it hard for anyone to try something until the last lap. Had there been 30 cars, those in the back half could not have waited that long to try something sooner. I doubt anyone thinks they can from 25th to 1st in the last two laps (unless of course there is a big one and they just happen to be the lucky guy that squeezes through and you can’t just hope for that).

It was obvious that whoever pulled out of line was going straight to the back. Maybe author Zach wasn’t happy with the finish, but that is what restricted racing gives us, especially when the bottom line isn’t working. Daytona and Dega are hours of follow the leader interspersed by a few big wrecks when somebody makes a move. I’m also glad Hamlin didn’t win. His arrogance gets more annoying over time. Biggest jerk in the sport right now.

I would like to say I didn’t think it was going to happen. But I knew it would, The Big One. Or should I say The Big Two. I have been a Nascar fan for over 50 years and at the point I really don’t care much any more. Nascar has changed from racing to made up excitement. The Chase, Stages, what a bunch of crap. One of these days Nascar isn’t going to be so lucky with the Big One. We lost Dale and have been lucky ever since. One way to stop the Big One is to ban Blocking. Almost all the wrecks start with a block. Make them race, not block.

I know nothing about NASCAR but it sounds like inexperience and do not have the eye of the tiger. The killer instinct.