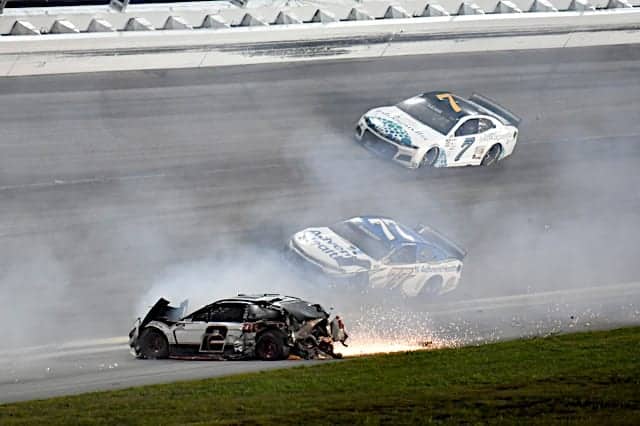 Did You Notice? … How quickly the last lap of the Daytona 500 fell apart for Team Penske? 2018 NASCAR Cup Series champ Joey Logano crossed the line leading. Brad Keselowski was second, in position to end an 0-for-11 streak at a race he so badly wants knocked off his bucket list. The organization was staring at their first 1-2 finish in the race since 2008. Behind them, sitting in the lead draft was Austin Cindric, in position for perhaps the best Cup debut for any driver since Rusty Wallace in 1980 (second place with Penske, coincidentally).

30 seconds later … they all wound up wrecked. And with every hit, potential Daytona 500 momentum for Team Penske was smashed into pieces, providing more questions than answers going forward.

“Wooo! Teammates!” FOX analyst Jeff Gordon says in this clip that paved the way for Michael McDowell’s Daytona 500 upset. The contact wiped out both Penske driver’s shot at the win while turning Cindric’s car into a pile of flames.

“I had a big run down the backstretch and wanted to make the pass to win the Daytona 500, and it ended up really bad,” Keselowski said. “I don’t feel like I made a mistake, but I can’t drive everybody else’s car, so frustrating.”

The veteran’s frustration with the situation was palpable. The moments after the 500 felt similar to the 2020 Busch Clash, a season that started with Logano and Keselowski butting heads after Logano’s block wrecked the No. 2 Ford in the season-opening exhibition.

“Somebody throws a stupid block that’s never going to work and wrecks half the field and then goes ‘eh’,” Keselowski said then. “Maybe we need to take the helmets out of these cars and take the seat belts out. Somebody will get hurt, and then we’ll stop driving like a**holes.”

The two Penske drivers worked it out, but the argument triggered a months-long drama over whether Keselowski would stay at the organization long-term. The end result was a one-year contract extension through 2021 that essentially kicked the can down the road.

Well, here we are, in the same situation again after this Daytona Speedweeks. Logano brushed off the wreck much quicker, refusing to dwell on what could have been.

“Chaos struck,” he said. “It ended up being a really big run coming at me, and we all collided in one spot.”

It left Penske with a Daytona hangover instead of the Harley J. Earl trophy. In a wild Silly Season ahead (NextGen car, potential new investors, many drivers with expiring contracts) Keselowski will again be one of the hottest names. He and Logano both made the Championship 4 in 2020, a sign they can co-exist competitively. But is the marriage Keselowski helped arrange in 2013 no longer working for him?

Then, there’s Ryan Blaney, in position to win the 2021 Busch Clash until best bud Chase Elliott spun him out. The Big One on lap 14 of Sunday’s Daytona 500 left him unable to lick those wounds and heal.

The same goes for Wood Brothers Racing and Matt DiBenedetto, a popular Cinderella pick to win the Great American Race after Matty D led 49 laps in this race two years ago. The No. 21 didn’t lead a single lap this time around, running a quiet 12th in the Duel qualifier before the Big One wrecked its chances early.

A strong start for the No. 21 is crucial considering Matty D is a one-year placeholder for Cindric, perhaps the best-positioned Penske driver after Daytona. His Cup start opened eyes for those who haven’t been paying attention, writing him off as a next-generation Paul Menard. There’s serious talent here, and without Chase Briscoe in the NASCAR Xfinity Series, the son of Team Penske President Tim Cindric could win up to a dozen races in 2021.

Yet Cindric’s success, as an offshoot of the Penske family, could make it easier to cut ties with Keselowski financially depending on how all the Silly Season dominoes shake out. Who do you think is less expensive and has a longer career ahead in this sport?

It all shakes out to a rough week for Penske that could have been so much different. Either Keselowski or Logano could have easily been making the rounds this week as Daytona 500 champion.

“It’s exactly where I want to be, running second on the last lap at Daytona with this package,” Keselowski said. “Had the run, made the move and it didn’t work out.”

We’ll see how far-reaching the implications are for the wreck that ensued.

Did You Notice? … Even though McDowell won the Daytona 500, he didn’t score the most points in the race? That honor goes to Denny Hamlin, who scored 52 points by winning two stages on Sunday before finishing fifth. That’s four more than Austin Dillon, who finished third, while McDowell, with 44 points, scored the third most points.

Think about how difficult that is to explain to a casual or new fan of the sport. Sports in general are defined by clear wins and losses. In the Olympics later this year, do you think they’ll award the gold medal to the third-place finisher in the 100-meter dash? “Well, John Smith did better in the first 30 meters, whipping the field, so he scored more points with observers during the run.”

That’s ridiculous and a longtime issue with the points since stages came into play in 2017. There’s also an easy way for NASCAR to fix it! Simply give the race winner more points than anyone else. Why not make wins 55 points instead of 40?

15 points isn’t enough to topple the apple cart in this system. It also prevents anyone else from eclipsing the first-place finisher. In a worst-case scenario, a second-place driver who won both stages would score the same amount of points (55) as a winner who has no stage points whatsoever.

I have no problem with that, considering we used a points system from 1975-2003 that created the same scenario. In the old Latford setup, a second-place finisher who led the most laps in the race would get 180 points, matching the winner’s total.

I understand the near-automatic playoff bid these victories create have kept this issue from boiling over. But it still doesn’t make any sense. Let’s hope NASCAR considers the fix for 2022.

I have had a problem with the winner not getting the most points since stage racing was implemented. While I hate the whole idea of stage racing, I realize that it’s not going away. Still, NASCAR could at least fix the points system so that the winner ends up with the most points. The emphasis needs to be on winning the race, not leading at arbitrary points in the race.

I agree that the point system appears to be stupid with the current iteration, but with the whole win and your in (the playoffs) deal, points are almost pointless. Sure they matter at the end for the final berths and seeding, but overall they are secondary to wins.

How about this: Winner gets 40 points, second 39 and so forth down to about 30th where all drivers 30-40th position get a flat 15 points. As much as I hate “stage racing,” you must use what is given to you. Therefore, if you win a stage, you get 1, and only 1 playoff point to be used for seeding in the playoffs only. You win the race, 2 playoff points. I think that is something simple enough that everyone can work with.

Maybe i’m In the minority but I am sick of broadcasters obsessively spending so much time talking about points points points. I know it’s not going to stop, in fact it will just get worse. Maybe I’ll just hit the mute button.

I certainly understand the arguments about whether the current points system is fair, but I don’t mind it. I’m a retiree, and it gives me an opportunity to exercise my brain on Monday mornings during NASCAR season as I review how each driver earned their points, the overall point standings, and projected playoff points. My issue with the broadcasters is that they are not always clear about regular-season points and playoff points. I can see how first-time or casual fans can be totally befuddled by the points discussions.