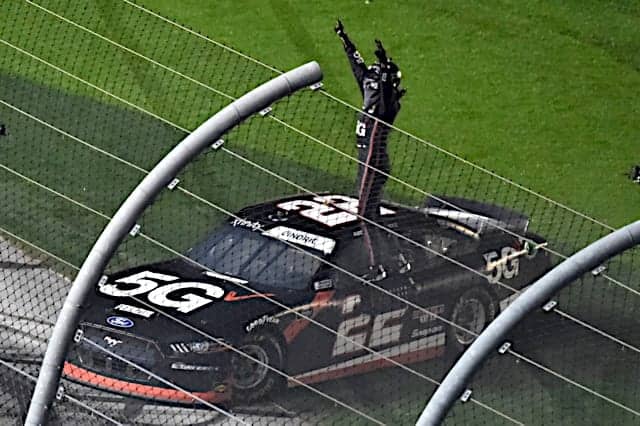 The NASCAR Xfinity Series stays in Florida this week, taking to the Daytona International Speedway road course instead for the Super Start Batteries 188. Given the current state of NXS, any driver other than defending champion and defending Daytona road course winner Austin Cindric winning this weekend would amount to a surprise winner.

Even in the midst of the craziness last weekend on the Daytona oval, Cindric still tied for the most laps led and survived a final restart to win. Of his six wins last year, four were on ovals longer than a mile and two others came on road courses. In short, he and his Team Penske group can win on multiple types of layouts, it’s hardly been a fluke.

At this point, anyone other than Cindric winning this weekend would amount to David slaying Goliath. He is by far the most polished and consistent driver in the series right now.

Even before his success of a year ago, Cindric was defined in this series as a road racer, with his first two career Xfinity wins coming at Watkins Glen International and Mid-Ohio Sports Car Course in 2019. Combine that prowess with his ability to win on multiple tracks over the past year, and beating Cindric this weekend would be every bit of a David toppling Goliath.

Last year, in Xfinity’s innaugural event on the Daytona road course, Cindric led 21 of the event’s 52 laps and had a margin of victory of over seven seconds. There’s no reason to doubt Cindric’s ability to echo that performance.

But the unexpected and unknown is what makes sports fun, so here are five drivers who could surprise with a win this weekend on the road course.

AJ Allmendinger – Not only have “The Dinger” and Kaulig Racing proved they can win, but Allmendinger is a proven road-racing commodity. Of his five career NXS wins, four have come at road courses. He even won at Watkins Glen for his lone win in the NASCAR Cup Series. Toss Kaulig’s speed with Allmendinger’s road-racing prowess together, and you have a strong threat to win.

Daniel Hemric – The last time Xfinity took to a road course, Hemric had a fighting chance at the end of the Charlotte Motor Speedway ROVAL, finishing third. There’s no reason to believe that Joe Gibbs Racing horsepower and his past experience that includes a full season in NASCAR’s top level won’t give him a shot to win.

Noah Gragson – A key element in being able to win is to be near the front late in a race. If a driver can be within the top five or 10 late in the race, they can be in a position to take advantage of late-race pit calls or other breaks that may fall their way. When you look at last season, Gragson did just that, posting the second-most top-five finishes in the series. A couple lucky breaks matched with Gragson’s skill could produce a win this weekend.

Harrison Burton – As the end of last year showed, Burton can run extremely well on multiple styles of tracks. Of his two wins in the final three races of 2020, one was on an intermediate track (Texas Motor Speedway) and the other on a short track (Martinsville Speedway). A road course is next on his list in Xfinity to conquer, and this weekend could play right into Burton’s proven versatility.

Riley Herbst – It’s a new team and new day for Herbst, with his JGR chapter behind him, as he is now with Stewart-Haas Racing. If you hear a rustling in the NASCAR garage, it’s a chip on his shoulder, as he is out to prove that he has some staying power in one of NASCAR’s national series. Plus, Herbst is racing in the Camping World Truck Series race the day before at the Daytona road course, so he’ll have more reps that he can use to his advantage.