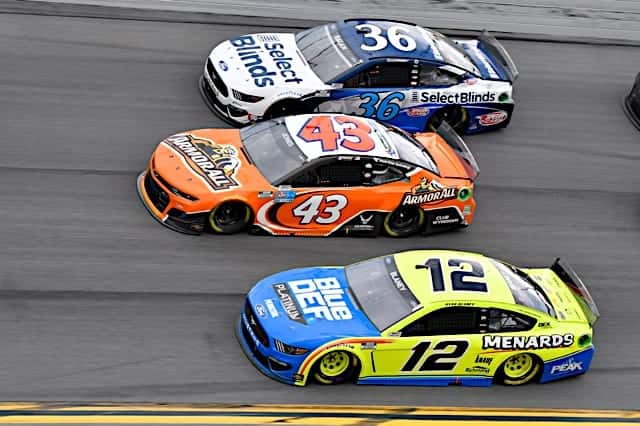 This year’s Daytona Speedweek provided many reasons, both good and bad, to be remembered by. New faces in new places, along with an entertaining combination of big wrecks, hurt feelings and thrilling dashes to the finish. It was all topped off by Michael McDowell’s unbelievable first career NASCAR Cup Series win after 358 prior tries.

In this edition of Frontstretch 5, we talk about five defining factors that made 2021 Speedweek one to talk about for years to come.

One positive aspect of Speedweeks was the emergence of three brand-new Cup Series teams, as well as a few others in the NASCAR Xfinity and Camping World Truck series. All the new teams in Cup featured iconic personalities with different backgrounds, all having the same ambition to succeed on the track.

In the Cup Series, Michael Jordan’s and Denny Hamlin’s new team, 23XI Racing, had an exciting debut week with driver Bubba Wallace. A runner-up finish in his qualifying Duel put Wallace’s No. 23 Toyota sixth on the grid. He led one lap during stage 2 and was later in contention for a top-10 finish until a vibration forced him to pit in the closing laps of the race. He finished one lap down in 17th after being collected in the fiery last-lap pileup.

Owner-driver BJ McLeod had a mostly quiet Daytona 500 aboard his and Matt Tifft’s No. 78 Ford, but was able to score a clean 23rd-place finish in Live Fast Motorsports’ first Cup start. For Trackhouse Racing Team, co-owner Pitbull gave the starting command before joining fellow co-owner Justin Marks to cheer on their driver, Daniel Suarez. Unfortunately, Suarez’s No. 99 Chevrolet was one of many casualties involved in the lap 14 “Big One” and ended up credited with a 36th-place finish.

For the Truck and Xfinity series, teams like Rackley-WAR Racing and Big Machine Racing Team had reputable runs in the races they ran. Due to qualifying being cancelled on Saturday (Feb. 13), Jordan Anderson Racing and Bassett Racing will have to wait to make their team debuts.

Any new team that gets to make their first race is a fantastic thing for NASCAR. Having 44 cars on the Daytona 500 entry list was good to see as well. Hopefully, this can develop into a healthy trend, where we see a greater amount of teams find the incentive to show up to the track and make a name for themselves.

Precipitation is an unfortunate, yet common, occurrence where Daytona International Speedway resides in Central Florida, especially during select race weekends. It has shortened four Daytona 500s throughout the event’s history (1965, 1966, 2003, 2009), and it would prove to be a nuisance during Speedweek once again.

Final Cup practice was canceled by rain on Saturday, eliminating precious time that teams could’ve used to fine tune their cars for Sunday’s race. Xfinity qualifying was also cancelled that same day, crushing the hopes and ambitions for several drivers and teams to make the field, including Jordan Anderson and Tyler Reddick.

With no qualifying scheduled for any future race weekends until May, this makes getting into these races a lot more difficult for newer teams who have no owner points to fall back on. It’s an unfortunate situation for them to be in, especially with such lasting negative effects. However, when it’s caused by something as simple as the weather, it’s a tougher punch in the gut.

Sure, the finish to the 500 was a thrilling one. Unfortunately, the same can’t be said for the style of racing we saw before the aforementioned finish occurred.

The five-and-a-half-hour rain delay put a damper on everyone’s race. When the race went green again, though, it became a tale of the field forming a train on the outside line, staying that way lap-after-lap.

The final 63 laps of the race were caution-free. For drivers riding around in a train-like formation on the top of the track, it can become an agonizing countdown until the final 10 laps when the action heats up again. It can also turn into a bore for fans who are watching this unfold as well. Whether this phenomenon can be blamed on the package, on strategy by the drivers or on a combination of the two, hopefully something new comes around for when the series heads to Talladega Superspeedway later this spring.

McDowell’s win, although a special one, is just one case out of many that plays into the notion of superspeedways being the ultimate equalizer of the field. As most fans know, drivers who normally run mid-pack or worse can use the draft as an opportunity to race higher up in the running order at these tracks. The chances of McDowell’s achievement happening at any other track besides Daytona and Talladega are much slimmer.

Two of Front Row Motorsports’ three wins have come on superspeedways (David Ragan at Talladega, May 2013, as well as McDowell’s victory). McDowell is also the eighth different driver to get his first series win in the Great American Race, which was last achieved by Trevor Bayne in 2011. The lone outlier to FRM’s statistic is Chris Buescher‘s fog-shortened win in 2016 at Pocono Raceway.

In the Xfinity Series’ opener, Brett Moffitt had a chance at an upset win with Our Motorsports, but couldn’t do anything with eventual winner Austin Cindric. Cory Roper and Anderson both came oh-so-close to getting their first career win in the Truck Series’ opener on Friday night, falling short to victor Ben Rhodes. The one thing they all have in common with McDowell, though, is that they played the game right and got in the mix when the white flag flew.

With the ferocious last-lap crash involving Brad Keselowski, Joey Logano, Kyle Busch and others, it extends the unfortunate streak of a last-lap crash occurring in the last six superspeedway races.

Winning the Daytona 500 is the ultimate prize of stock car drivers everywhere. The 40 best individuals in the country get to compete for it every year. Drivers will risk anything they have to in order to win this coveted event. Unfortunately, sometimes a driver’s over-ambitiousness may cause them to make a mistake and cause a major crash.

You have to go back to the rain-shortened 2019 Coke Zero Sugar 400, won by Justin Haley, to find the last superspeedway race that didn’t have a last-lap crash take place. But that was because the last few laps were ran under caution following a huge pileup prior to the race being called for weather. The last superspeedway race that went the full distance to not have an accident on the final circuit was the 2019 Daytona 500.

Everyone loves to see a good, clean, hard race to the checkered flag, especially in the events during Daytona Speedweek. The “checkers or wreckers” mentality is a sleeping giant, ready to wake when one driver gets it wrong in the middle of the pack. With each flick of the wheel, the drivers control the calm and the chaos. There is no middle ground. Be prepared for all of one or all of the other to happen when the white flag waves.

more things change, the more they stay the same. that’s my takeaway from the race. been that was forever!!!!!