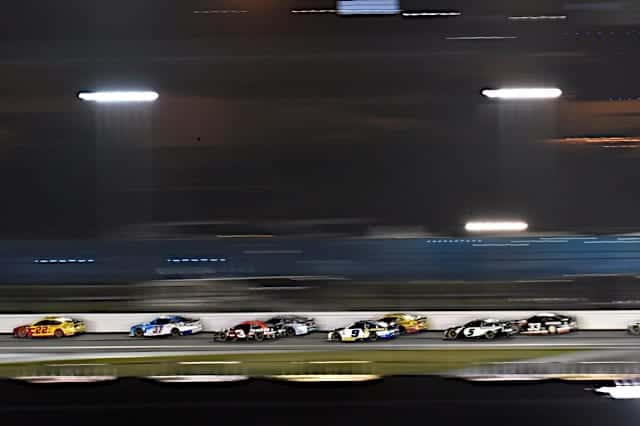 It was a long time coming for Michael McDowell. From a rushed prospect, to starting and parking while driving Trevor Bayne‘s motorhome, to his home now at Front Row Motorsports, it all led him to where he is now: a Daytona 500 champion.

His first victory came in his 358th career NASCAR Cup Series start, his 14th season at the top level. There’s plenty other talent that have yet to grace victory lane in their Cup careers, both young and old(er). Who’ll be the next driver to get their first victory?

Plus, with the last two Daytona 500s affected by rain, chatter has been ongoing regarding a remedy to avoid Mother Nature’s inevitable havoc that she tends to wreak on NASCAR.

Should the start time of The Great American Race change?

Q: Michael McDowell got his first Cup win on Sunday (okay, Monday). Who will be the next driver to do the same? – Aaron B., Indianapolis, IN

A: Ah, a submission from one of our very own (kind of) at Frontstretch, Aaron Bearden! My man.

There are a ton of candidates, obviously. Beyond the young crop in the Cup Series consisting of rookies Chase Briscoe and Anthony Alfredo, sophomore Christopher Bell is primed for a trip to Victory Lane with Joe Gibbs Racing, Bubba Wallace has a newfound look on life at 23XI Racing, Matt DiBenedetto is in a prove-it year with Wood Brothers Racing and Ross Chastain, though not officially a rookie, is hungry to show he’s worth the hype with Chip Ganassi Racing.

Not to mention Corey LaJoie at his new home with Spire Motorsports, Tyler Reddick possibly poised for a break-out year at Richard Childress Racing and Daniel Suarez at the newcomer Trackhouse Racing, an opportunity he called the best of his career, are all still looking for their first wins.

Conventional wisdom suggests Bell will be the first to win, given his obvious edge in the equipment department and organizational resources. But Wallace isn’t too far behind, seeing that 23XI’s alliance with JGR is essentially that of former championship-winning Furniture Row Racing. It’s not a fifth car out of Gibbs’ stable, but it’s about the closest thing to it.

Reddick, though, showed flashes of brilliance in his rookie season with RCR, but was never really that close to contending for a victory. Austin Dillon bested him at Texas Motor Speedway last season, but both drivers were up there based on tire strategy (not taking anything away from them, but they didn’t get there based on raw speed).

One of his competitors who competed for Sunoco Rookie of the Year honors with him was Cole Custer, who earned that award thanks in part to his win at Kentucky Speedway. Even he would likely tell you his win came a bit sooner than expected. Sometimes, being at the right place at the right time pays dividends.

But to answer your question, I’ll stick with Bell. Wallace is a tempting choice (especially given his speed during Speedweeks at Daytona International Speedway), but given the upcoming Bristol Dirt Race, as well as Homestead-Miami Speedway, where he scored his first of seven top-10 finishes last season, C-Bell is the odds-on favorite in my mind to become the next first-time winner in the Cup Series.

Q: I’m getting so tired of rain interfering with the Daytona 500. I stayed up to watch on Sunday night/Monday morning, but this could all be fixed with starting earlier in the day. Should NASCAR change the start time for the 500? – Hank R., Daytona Beach, FL

It seems so backwards, doesn’t it? Everybody and their grandmother knows weather and Florida don’t mix well, especially in the late afternoon. So starting the race around 2-3 p.m. ET leaves you in a precarious spot when (not if) Mother Nature doesn’t cooperate. See: the last two years.

These last two years, NASCAR had a golden opportunity to capitalize on a renewed national interest in the sport. But events out of their control forced the delay/postponement of the biggest race of the year. Besides raindrops falling on the asphalt, the other sound was remotes clicking off the race, with most casual viewers not coming back the following day or at 10 p.m.

I’ll also say this: I completely understand the television broadcast partners’ side in this. Starting at or around 3 p.m. compared to noon or 1 p.m. is a monumental difference in viewership/ad revenue. That’s the sole reason why there are zero (!) 1 p.m. starts in the Cup Series anymore.

But I’d be in favor of A). Tradition winning out and B). Changing it for this race and this race only.

The 500 used to start at or around noon for years, way before my time. Weather was an issue here and there, and always will be. It’s unpredictable as all get-out, but not as frequent as it has been in recent years since the start time was moved back.

Start the Daytona 500 at 1 p.m. ET sharp on Sunday, and start every other race whenever the hell you want for the rest of the year (okay, maybe not whenever, but you catch my drift). The 500 is special and has more build-up than any other event all season long. So why not give it even more special treatment?

Hopefully, avoid the weather, avoid large tuneouts due to delays and appease the traditional fan base with an earlier green flag, and all will be right in the world.

So the NFL can start their games at 1pm ET but the 500 has to start at 3 for max ratings? Oh and Fox also does the NFL games and they don’t complain about the start time? Hmm.

“Daniel Suarez at the newcomer Trackhouse Racing, an opportunity he called the best of his career, are all still looking for their first wins.” His previous opportunities at JGR and SHR weren’t good enough for him?

As a long time fan, (that will end my fans ship of this series/sport at the conclusion of this season0 dating back to 1958, I can say with authority, that it is UTTERLY STUPID to start a race at this track after 12:00!