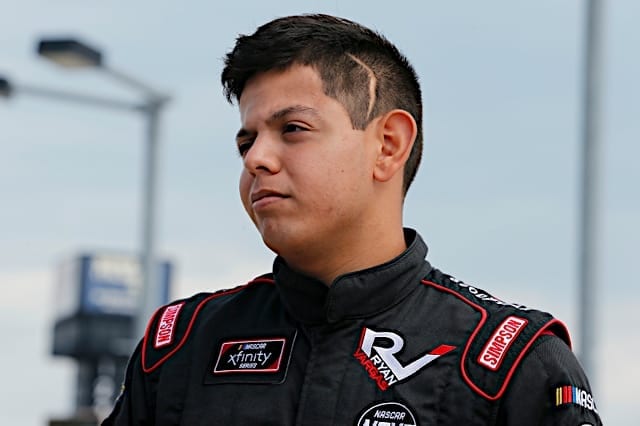 The company is owned by National Football League star running back Alvin Kamara, who replied to Vargas’ Twitter post about needing a primary sponsor.

“Having the opportunity to work with Alvin Kamara and The Big Squeezy is such a huge honor,” Vargas said in a team release. “As one of the best running backs in the game, I know Alvin puts 110% effort into everything he does and that can easily be said for myself and our [No.] 6 JD Motorsports team. I’m excited to be a part of Alvin’s first step into the NASCAR Industry and I believe this is just the start a long, successful partnership!”

“When this opportunity presented itself, I knew I couldn’t let it slip by,” Kamara said. “I did a bit of research on Ryan as an individual and JD Motorsports and was impressed with what I read. I’m excited to play a small role in what they already have going on. In the same breath, I’m just as excited for the opportunity that this gives The Big Squeezy. With us gearing up for franchising our new express concept in 2021, I think this gives us an avenue to express our passion for serving healthy fresh foods and juices throughout the country!”

Beyond excited to announce that I’ve teamed up with @Saints RB @A_kamara6 & his company The Big Squeezy for this weekend’s race at the Daytona Road Course!

Alvin’s excitement about NASCAR is unmatched & I’m honored to be the guy he jumps into the sport with!??? pic.twitter.com/p9FyUlGCzl

Kamara went on SiriusXM NASCAR radio after the announcement Wednesday to share how the partnership came together.

“I went to Daytona on Sunday and I was tweeting all race,” Kamara said. “I was sitting up in the suite, talking to (NASCAR president) Steve Phelps and a lot of the NASCAR personnel. I’m like, ‘Man, ownership must be hard, and sponsorship and all this,’ and they’re like, no, not really, it’s easy. So I shoot out a tweet, I just found out I could own my own team, or possibly have my own team. Everybody’s going crazy. I get back on Monday and I’m seeing a lot of tweets and stuff. I stumbled across Ryan’s tweet talking about how he doesn’t have a sponsor for this week’s race, so I’m like, OK. So in my head, I had no knowledge of what it takes to sponsor a car, none of that.

“So I tweet Ryan back, I’m like OK, what do I have to do to make this happen? So he hits me back, he’s like, ‘I’ll hit you in a few, I’ll message you in a few.’ So I’m like, alright, is he really going to message me? So he messages me on Twitter and gives me the rundown and puts me in touch with Tony [Priscaro], the Vice President of JD Motorsports.

“I’m getting on a flight leaving Daytona that morning, I’m like, well, all I can do is try, let’s see if I can make it happen. I land, called Tony, talked to him, I’m like, oh shoot I can do this. So I’m like, why not? I got something I could market right now. Ryan obviously didn’t have a sponsor, so I’m like, man, why not? I actually like the sport, it’s perfect. I feel like I kind of manifested what I tweeted on Sunday.”

Fellow NFL running back Antonio Williams, who recently announced his investment into Joe Graf Jr., posted a challenge to Vargas and Kamara.

Vargas finished 18th in the season opener last week. He has one top 10 — an eighth at Texas Motor Speedway — in 13 career Xfinity starts.