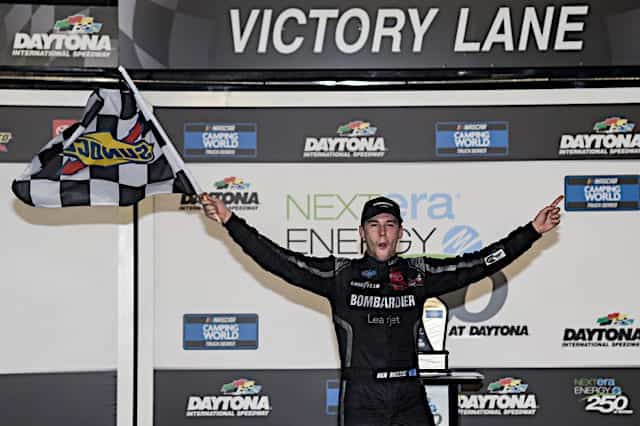 A Camping World Truck Series race at Daytona International Speedway isn’t exactly the best gauge for how drivers will perform the next week or, moreover, how a season will go for anyone in the field. But that doesn’t stop us from trying.

In a race that literally started and ended with trucks wrecking across the line, Ben Rhodes secured his fourth career victory and almost surely locked himself into the 2021 playoffs, getting a massive run to pass Cory Roper out of the fourth turn and barely beating Jordan Anderson in the tri-oval.

This is the final lap you need to see. @DAYTONA | #NextEra250 pic.twitter.com/wKqoMsyVVA

This season marks Rhodes’ sixth with ThorSport Racing. In the previous five years, he and Matt Crafton were the only constants. The team has swiveled from Toyota to Ford and back again, renumbered trucks, had a revolving door of drivers the likes of Cameron Hayley, Rico Abreu, Cody Coughlin and Myatt Snider have passed through, and, through it all, has found success despite continuous changes. Crafton won the 2019 series title without a single victory all season, his third in NASCAR’s tertiary series, and the team’s lineup stayed largely the same for 2021 as it was the two years prior.

The only change: Grant Enfinger, who came close to winning the 2020 title and found great success in the No. 98 truck, will now split that ride with ex-Kyle Busch Motorsports driver Christian Eckes.

Rhodes, meanwhile, is in a prove-it year when it comes to his series resume. He had nine top-five and 14 top-10 finishes last year, career bests on both fronts. In the win category, all four of his victories came in different years. Prior to this year’s Daytona triumph, he won at Las Vegas Motor Speedway in 2017, Kentucky Speedway in 2018 and Darlington Raceway in 2020, with the last coming just before a series of incidents at Texas Motor Speedway that didn’t help him make friends.

The then-22-year-old dumped Eckes (hey, new teammate) in the Texas tri-oval, sending the No. 18 hard into the outside wall and earning Rhodes a double-bird from Eckes when the No. 99 trundled by under caution.

It would be an understatement to say that Rhodes’ path to where he’s at now was bumpy and winding, but for brevity’s sake, we’ll leave it at that. He had a string of races where he came closer and closer to a victory, memorably culminating in a 2017 race at Kansas that he seemed to have won … until his engine let go with eight laps left. Kyle Busch cruised to the win, but the most memorable image of that race was Rhodes half-exiting his truck, sitting on the window and slamming the roof of his Toyota with both hands.

The wins haven’t been constant, but it’s pretty safe to say that Rhodes is in the equipment he needs to make a championship push.

Friday night’s (Feb. 12) race should be a big confidence booster for Rhodes, too. He called it the biggest win of his career in his post-race interview and doubled down in post-race media availability.

“This is Daytona, right?” he said. “My [win at my] home track [of Kentucky in 2018], that’s the biggest one of my life up to that point. It’s my home track, I had so many people there counting on me, depending on me, but now we’ve gone through this COVID swing where there’s nobody here now, and you’re kind of enjoying things in isolation. I’m out there dancing by myself, having my own little party, but I don’t care. I was having a great time. This is Daytona. I don’t care. I love it, it doesn’t get any better than this. The name says it all … it doesn’t get any better.”

Rhodes has finished in the top 10 in points each of the last four seasons but has never had the chance to race for a title in the season finale. He has the win out of the way, so the No. 99 team is more than likely already looking ahead to the playoffs; that is, unless there are so many winners that he has to fight just to have a spot in the postseason.

Either way, though: like he said, Daytona is Daytona.

The top-10 finishers in last Friday night’s Truck race almost all fit beneath the underdog umbrella.

Rhodes and 2020 champion Sheldon Creed (who finished sixth)? Maybe not, but nearly everyone else did. Anderson and Roper in second and third were the biggest stories, the former recording his second straight runner-up at the track. Full-time Niece Motorsports drivers Ryan Truex and Carson Hocevar in fourth and fifth weren’t half bad either. Codie Rohrbaugh scored his second straight top 10 in eighth, while Kyle Busch Motorsports had all three of its trucks in the top 10.

KBM is by no means an underdog team, but after a couple seasons of frustration things might be starting to come together: John Hunter Nemechek, fresh off his rookie season in Cup, came home seventh; Chandler Smith‘s first start as a full-time driver ended with a ninth-place finish. Drew Dollar, part-time in the No. 51 Toyota, was 10th – not too shabby for his first-ever start.

It’s Daytona, yes, where anything can happen, but confidence and momentum boosters like these are invaluable for small teams or drivers attempting to make their way in NASCAR.