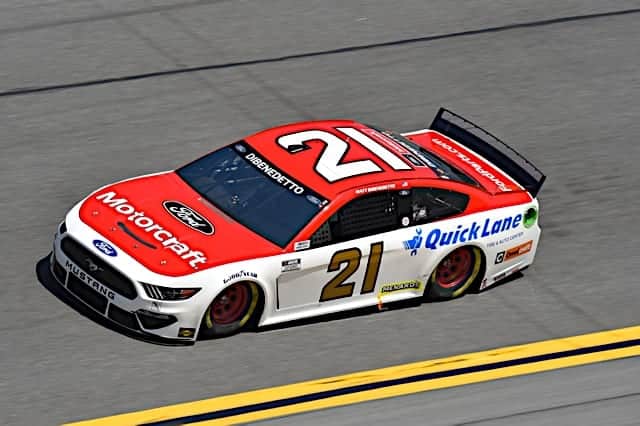 You may have heard that Michael McDowell was the Cinderella story in last weekend’s Daytona 500. You might also have heard that he had a lengthy history of losing (as in, the absence of winning) that spanned nearly 15 years.

In fact, prior to his putting on his glass slipper, the Arizona driver had started his engine a whopping 357 times but failed to win, the most of any active NASCAR Cup Series driver at that time.

However, as Frontstretch‘s Luken Glover explained, every dog has its day. Of the 48 drivers who have attempted to enter a Cup race in 2021, exactly half (24) are hoping that such a day will also happen to them.

These 24 winless drivers have made as many as 213 starts to as few zero, as is the case of Scott Heckert (making his Cup debut this Sunday) and Noah Gragson (who failed to qualify for the Daytona 500), without reaching victory lane.

Nonetheless, McDowell’s 0-357 record is now void. With the new Daytona 500 champion out of the way, let’s take a look at the active drivers who’ve raced in the Cup Series thus far in 2021 who have made the most starts without a Cup win.

BJ McLeod 58 Starts: McLeod rolled into South Florida this month debuting his brand-new team, Live Fast Motorsports. The 37-year-old owner-driver will try to not let that number grow any bigger now that he is primarily driving his own equipment.

Joey Gase 75 Starts: Gase has snagged rides in the series for the better part of the last eight seasons, most of which have been sponsorship dependent. For that reason, the Iowa native has settled in the pack quarter of the field in often some of the oldest equipment in the garage.

Ryan Preece 78 Starts: Preece caught fire in the Xfinity Series while competing part-time in 2018. It earned him a well-deserved promotion. But little success has been found for the driver out of Connecticut. Preece’s team lost a charter this season, which means a full-time 2021 campaign is in doubt. He did score a top 10 in the Daytona 500 but will need to have a much bigger improvement to get off this list.

Ross Chastain 80 Starts: Like McDowell, Chastain had a similar streak in the NASCAR Xfinity Series before he finally captured his first win. While full time in NXS, he also supplemented his seat time by running a multitude of Cup events for backmarker teams. Even though he just got plopped into a seat at the more formidable Chip Ganassi Racing, his winless steak is already one of the highest in NASCAR.

Bubba Wallace 113 Starts: It is hard to believe that Wallace has already made over 100 starts in NASCAR’s highest division since he first subbed for an injured Aric Almirola in 2017. He came up a close second in the 2018 Daytona 500. Now in top tier equipment under the leadership of Michael Jordan, Wallace has his best shot he has ever had to get that first victory.

Timmy Hill 128 Starts: OK, he has won on national television… well, if you count iRacing. Nonetheless, this journeyman from Maryland has scratched and clawed his way to the top level of stock car racing. While he has never come close to earning a Cup trophy, his can-do attitude might just get him there one day.

Corey LaJoie 130 Starts: Like Wallace, it is almost surprising to hear that LaJoie’s starts have climbed into the triple digits. The 29-year-old has shown some promise at superspeedways but still has some work to do to find that checkered flag. If tradition does hold, LaJoie might just find a seat at a competitive team. He’s pretty much had a stint at every team in the back half of the garage so there is only one way to go and that is up.

Daniel Suarez 144 Starts: Once touted as one of NASCAR’s next stars, the 2016 Xfinity champion has surprisingly not found victory lane, even during his tenures at two of NASCAR’s most powerful teams. Now dished out among the midpackers, Suarez will certainly need an uptick in performance to have a decent chance to break his streak. We will if the brand-new Trackhouse Racing Team will provide that stable footing.

Ty Dillon 162 Starts: Although no longer a full-timer in the Cup Series, Dillon is still trying to find victory lane. Often caught in the shadow of his Daytona 500-winning brother Austin Dillon, the younger sibling will primarily be focusing on his Xfinity efforts in 2021.

Matt DiBenedetto 213 Starts: Who can forget when Matt DiBenedetto came bitterly close to picking up his first career victory at Bristol Motor Speedway in 2019. Last season, he nearly did the same at both Las Vegas Motor Speedway events. Still, with 213 events under his belt, the fan favorite DiBenedetto has a nagging goose egg in the win column. Unfortunately for the 29-year-old, McDowell’s victory places DiBenedetto first on NASCAR’s winless list.

However, DiBenedetto’s record is dwarfed by the late JD McDuffie. In 653 career attempts, McDuffie never found the spoils of victory lane, a NASCAR record.

Without a win, McDowell would have equaled McDuffie’s mark sometime in 2029 if he where to have continued as a full-time driver. Now, the record does not stand a chance to be broken until at least 2033 if DiBenedetto continues as a winless full-timer.