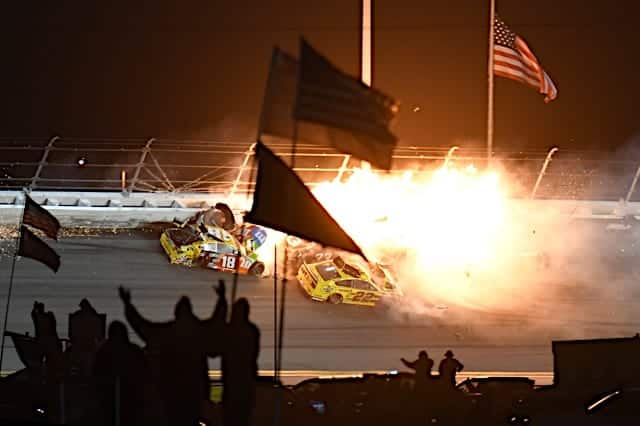 Twenty years ago – has it really been that long? Seems like it was just a week or maybe a year ago.

Twenty years since we lost the biggest star in the history of the sport. Thankfully his death wasn’t in vain.

The safety innovations that were brought to the sport in the months and years after that horrible day have undoubtedly saved countless lives. Just one year ago we saw Ryan Newman walk out of a hospital two days after a wreck that would have killed him before 2001. At the same time, we watched the “Great American Race” this past weekend and another wreck looked frighteningly close to tragic. Safety is much better than it was, but we still have to keep working on more and better ways to keep drivers, teams and fans safe.

Sunday early afternoon, ESPN aired a documentary/tribute to Dale Earnhardt, remembering that fateful day. Ryan McGee, in his eloquent style, tugged at our heart strings and soberingly reminded us how foolish people were about safety before Earnhardt’s passing. To think that the technology existed that could have saved his life, but almost no one was using it because of lame excuses, is gut-wrenching. While it took a world-altering event to wake up the sport, it fortunately greatly accelerated the acceptance and development of numerous safety measures. We can do better.

While we finally wised up to the fact that running into concrete was a dumb idea, we still have locations at tracks that are not properly protected. Some are protected at poor angles that can still make accidents potentially more harmful than they need to be. “Ballfields” at most tracks that have them are still covered with actual grass. The end result is cars digging into the ground and destroying cars. It has been a while, but the potential is still there for a car to hit it sideways and roll over. We can do better.

Watching the end of Newman’s wreck in 2020 was heart-stopping to begin with. When the vehicle came to rest, the oil tank was pouring oil out onto the racing surface around a destroyed car still full of red hot metal. If that had ignited, Newman could have easily been injured or worse. Sunday’s race ended with a huge wreck in turn 3. Part of that wreck included an enormous fireball. It appeared as though the fuel cell on Brad Keselowski’s car was ripped from the vehicle when it hit the fence. At best, it was ruptured and the fire that resulted engulfed three or more cars. Fires seem to be occurring with more frequency of late. We can do better.

Also watching the race on Sunday (Feb. 14), we saw Kaz Grala’s team send him back on the racetrack while his car had a malfunction that was causing a fire. There are certainly times in a race where some rubber on a brake rotor or wheel can ignite and being on the track, at speed, will put it out. When you have a problem that has taken two or three fire extinguisher’s contents and it is still burning, the wind from the car at speed is not going to put it out. The decision by his crew was poor at best and foolish at worst. Not only could a failure have resulted in harm to Grala, it could have also affected other teams. Consequences must be considered when making a decision that could be unsafe. We can do better.

Is this a result of making cars lighter and lighter? Hopefully not, but there seems to be a trend. Obviously, the rules are written in an effort to make the cars as safe as they can possible. No one is intentionally doing something dangerous, but the search for speed can have blinding effects. We were reminded of that at the Chili Bowl this year. During the downtime of track prep before the A-main, there was a discussion with a driver about the weight of his car. He noted that, since full containment seats are not required, many teams were eschewing them as a means of saving weight. When compromising driver safety becomes common place for chasing speed, there is a problem. We can do better.

The Next Gen car is coming out next year. Hopefully there will be some lovely, high dollar, PR work done to highlight all of the additional safety measures that have been added. McGee reminded us during the Earnhardt show that no one has died in a national NASCAR touring series event since that fateful day in 2001. The NASCAR R&D center has done a lot of work on implementing safety measures that have done a great job of keeping drivers safe in terrifying crashes. Since we’ve gone 20 years without a death, let’s pray we aren’t getting complacent. It feels like we are taking our eye off of the ball on safety and that is simply unacceptable as a sport. We can do better.

Kudos to you, Mike Neff for highlighting this issue. NASCAR has been all about aero for the past 20 years and it’s about time for the chickens to come home. NASCAR needs to start implementing some of the traditions of the past and bring back some mechanical advantage to teams. The past 20 years have been all about aero and a lot of people would like to see what teams can bring to the table if allowed to tweak the cars a bit. For one, I am tired of seeing cars just bring holes in the track; lighten up a bit, Frances! Let teams explore a little, within the safety constraints already in place.

i commented at Matt McLaughlin’s article about the fact that there’s too much fire now.

and just because arca series isn’t a top 3 nascar touring series, does not mean that blaise alexander’s death at charlotte in october, 2001 should be swept under the rug. his death was cause by a wreck and same type injury as the cup drivers in 2000 and 2001.