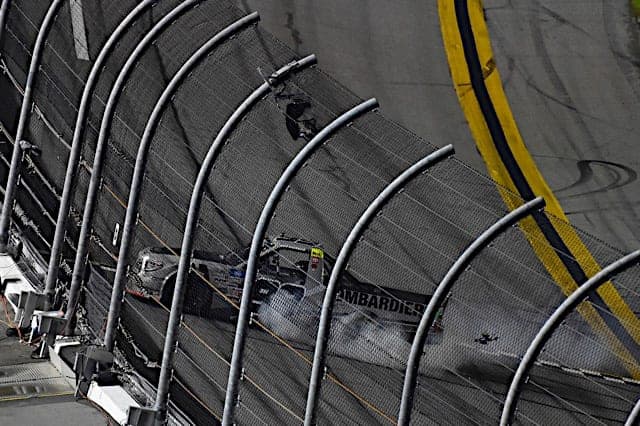 Ben Rhodes found his way into the Daytona International Speedway victory lane for the second time in seven days.

One week after winning on the Daytona oval, Rhodes held off the 2020 NASCAR Camping World Truck Series champion Sheldon Creed to claim the win on the road course in the BrakeBest Brake Pads 159.

The 23-year-old Rhodes survived myriad crashes, mother nature and triple overtime to claim his fifth career win and the 200th overall for Toyota.

The Kentucky native bumped the then-leader Creed out of the way during the first overtime segment and was mere feet away from taking the white flag before a caution flew. Rhodes was able to hold off a hard charge from Creed in the remaining segments slowed by crashes to bring home the victory.

Although heavy rains subsided by race time, spotty sprinkles asserted their presence throughout the night. NASCAR elected to start the race under wet weather conditions because of the soggy track surface. Nonetheless, the contest became the first Truck event in over two decades to be run in the rain.

Teams will install rain tires prior to leaving pit road.

John Hunter Nemechek quickly disposed of the polesitter Rhodes and subsequently dominated the opening stage. This only happened after a small but caution-free dust-up between Raphael Lessard and Zane Smith on the opening lap that jumbled the field.

Lessard recovered from his early tangle to win the segment, the second stage win for the Canadian in the young season.

Creed regained the lead after the stage break but lost several positions for failing to maintain speed under caution following a crash between Niece Motorsports teammates Ryan Truex and Carson Hocevar.

A big hit going into the frontstretch chicane for @zanesmith77 will end his night and reset the field. pic.twitter.com/AdzfqEX2PT

Creed took the lead away from Rhodes with three laps to go, but a Tanner Gray and Sam Mayer crash prompted the triple-overtime finish.

Creed held onto second while Nemechek rebounded from an engine issue that put him a lap down to finish third. Todd Gilliland and Riley Herbst rounded out the top five.

The series will back in action next month at the Las Vegas Motor Speedway for the Bucked Up 200 on March 5. The green flag is slated to drop at 7:30 p.m. ET, with TV coverage provided by Fox Sports 1.

Junior Johnson would of loved Ben Rhodes. He wanted it more.