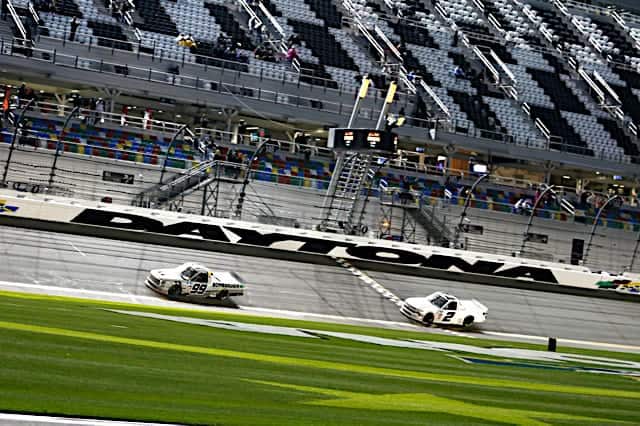 A downpour prior to the race made for less-than-ideal driving conditions, but precipitation stayed clear of the track for the duration of a two-hour, 45-minute race that became the longest Truck event in the division’s 26-year history.

Multiple late-race cautions dragged out a prolonged conclusion, where Rhodes nailed every restart to retain the lead and hold off Sheldon Creed, John Hunter Nemechek and other challengers. Creed and Nemechek had solid trucks all night, but neither had enough to get by the No. 99 as Rhodes won his second straight race, leading just 13 laps; the former duo finished second and third, respectively, both leading more laps than the eventual winner.

Some stats about tonight's Truck race that seemed to never end ⬇️

Todd Gilliland and Riley Herbst rounded out the top five in a spin-filled, constantly under caution race that never seemed like it would end.

With the win, Rhodes also picked up Toyota’s 200th win in NASCAR’s tertiary division. His back-to-back wins to open the season marked just the third time a driver did so in series history.

The Win that Could’ve Been

Creed and Nemechek both fall under this umbrella. Creed ran near the front all race, as did Nemechek, but both had their issues: Nemechek ran well to start the race, took the lead from Rhodes in the first turn of the first lap and won the first stage. The second-generation driver then lost oil pressure while still running in the top five, charging back through the field and took several rows of trucks three-wide on a late restart to gain ground.

The caution has come out at @DAYTONA. pic.twitter.com/K1PCKmZZsa

Creed, meanwhile, was a contender for most of the race in an unsponsored GMS Chevrolet but nearly had his chances at a win shattered early on when Bobby Reuse, driving Jordan Anderson Racing’s No. 3 that finished second last week, slammed his door. Creed was leading at the time, while Reuse was in the process of being lapped.

When the field finally, mercifully took the white flag, Creed was mere truck lengths behind Rhodes and looked like he might have a shot if the No. 99 made a mistake in one of the chicanes. He didn’t get the chance, though: a caution waved as Rhodes and Creed rumbled through the banking of turns 3 and 4 for the stopped No. 44 of Jett Noland on the frontstretch.

Nemechek, meanwhile, finished third but never really had a shot on the restarts. Rhodes and Creed seemed to get away through the oft-chaotic first turn, while Nemechek — and everyone else — were sucked back into a jumble of trucks fighting for position.

Heavy damage to both trucks pic.twitter.com/K3TPLAljJf

Smith was never a player up front but took care of his truck as much as he could during the race and ended up 12th. Hocevar deserves a special mention, if only for bringing a half-wrecked Chevrolet home 14th after smashing into the sand-filled barrels at the end of pit road mid-race.

Point Report: After two races, Rhodes still leads the points; Nemechek now sits in second, nine points back. Creed, Smith and Matt Crafton complete the top five, Hocevar sits sixth and Raphael Lessard, who won stage two, is seventh. Rohrbaugh is eighth, Johnny Sauter ninth and the trio of Truex, Gilliland and Austin Wayne Self round out the top 10.

Ankrum just called someone a Donkey, so that’s entertaining

"UN-FUCKING-BELIEVABLE. This is embarrassing" @benrhodes screams over the radio.

TRUXXXXXXXXXANNE
YOU DON'T HAVE TO PUT OUT THE RED LIGHT pic.twitter.com/560TMPueU0

The truckers get a two-week break before visiting Las Vegas Motor Speedway on Friday, March 5. The 201-mile event is set for 9 p.m. ET on Fox Sports 1. Austin Hill is the defending winner at the track after a victory there last fall, but Kyle Busch won the spring race last year.