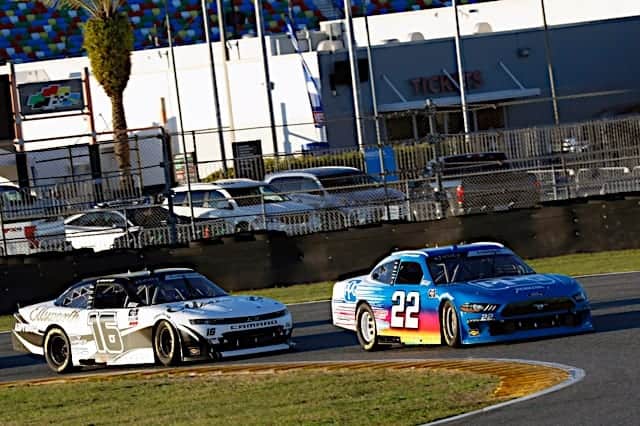 Austin Cindric was looking to replicate Ben Rhodes‘ feat in the NASCAR Camping World Truck Series by starting off 2021 with back-to-back wins in the Xfinity Series the following day. The winner of last week’s NASCAR Racing Experience 300 on the Daytona International Speedway oval was one of the favorites entering the first road course event of the season on the Daytona road course.

The road started off bumpy for the 22-year-old. After leading 11 laps to start out the race, Cindric was running second behind race leader AJ Allmendinger. The two road aces were battling it out for the stage win coming off of the frontstretch chicane when they made contact. Cindric got hooked on Allmendinger’s quarter panel, spinning the No. 16 and ripping off the right-front fender of Cindric’s No. 22. Cindric drove to the start/finish line to claim the stage one victory, but faced an uphill battle.

After lengthy repairs to his Ford Mustang, the Columbus, Ohio, native breezed his way through the field. Any sign of being hindered by the damage was nonexistent as the Team Penske driver rallied to finish sixth in stage two.

Cindric restarted fourth in the final stage and quickly worked his way up to second. A lap after the restart, Cindric passed Daniel Hemric for the lead and held onto it until three laps to go when a caution for debris forced a caution. The lone Penske driver in the Xfinity Series fought hard with rookie Ty Gibbs for the lead, and had just seemed to put a large enough gap between himself and Gibbs before the yellow flag was displayed.

Along with the majority of the leaders, Cindric came to pit road for fuel and tires. Restarting in the 11th position for an overtime restart, the defending Xfinity champion drove up to seventh on a chaotic restart. On a second overtime restart, Cindric went three-wide to get to third and eventually second behind leader GIbbs. Trying to go back-to-back to start off the year, Cindric drove the wheels off to catch Gibbs, but ultimately came up short to the first-time winner.

When asked about his stage one incident, Cindric told FOX Sports, “Obviously I don’t want to be racing to a stage probably that aggressively. I’d love to see a replay. Hopefully we can avoid something like that because obviously AJ [Allmendinger] and I were going to be fighting for a win later today. I hate to be able to do that much damage to our PPG Ford Mustang that early.”

Cindric emerges as the series points leader and will look to continue the momentum next week at Homestead-Miami Speedway.

Why does Austin Cindric look like he just served time in the Russian Gulag Concentration Camp? Grow some hair.