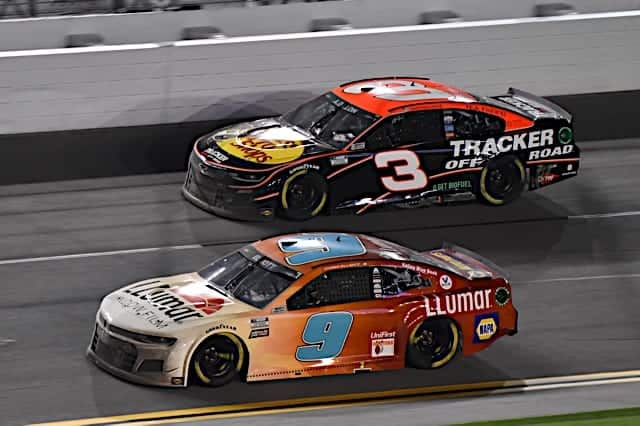 Is this weekend deja vu in NASCAR? It is for many Cup Series teams who competed in the Busch Clash less than two weeks ago. They return to Daytona International Speedway to turn left and right on the road course Sunday, Feb. 21 at 3 p.m. ET.

This layout is much longer than some other road courses on this year’s schedule. It’s 3.61 miles with some infield turns and two chicanes on the oval portion of the track.

The low-downforce, high-horsepower package will be used, which should make for some good action throughout the field. I mean, just look at what happened in the Clash. Chase Elliott collided with Ryan Blaney going for the win in the final chicane, allowing Kyle Busch to sneak ahead. Imagine what drivers will do for points!

So what should you do to earn DraftKings points? Well, you’ll want to target drivers who can finish well and progress through the field, as just 17.5 and 31.5 fantasy points are available for laps led and fastest laps, respectively.

The site lowered the points for each fastest lap to 0.45, as well as the points awarded for first place to 45. DraftKings has also put more emphasis on drivers who finish in the top 10 and top 20. For example, the gap between 10th and 11th place is now two points instead of one: 10th gets 34 points, while 11th gets 32.

Before I move on to my picks, let’s see what happened in the Daytona 500 for my roster:

Ouch. Blaney, Matt DiBenedetto and Chris Buescher all crashed out on lap 14, leaving this lineup in the dumps right away. Such is the nature of this track, though; you can’t always come out unscathed, no matter how much experience you have.

Note: the following is a sample DraftKings lineup; you can use the information to create your own or brush up on your knowledge to make bets elsewhere within the NASCAR sports betting community, such as betting24.

Truex has the highest salary on the slate, and for good reason. For starters, he has four total road course victories, including three at Sonoma Raceway. Truex has also led several laps on road courses; in 2018 and 2019, he led 121 total laps on the way to earning two of those trophies out in wine country.

In many of the other recent events on this track type, Truex rebounded after suffering pit road violations. For example, last year Truex came back from speeding penalties to end up third at Daytona and seventh at the Charlotte Motor Speedway ROVAL. Over at Watkins Glen International, Truex has runs of first, second and second in the past three races. (NASCAR didn’t race at WGI last year due to the COVID-19 pandemic).

Truex may not be the favorite to win, but he has certainly shown speed on these courses. He had the fastest green flag speed in last year’s event on the Daytona road course and is sure to charge to the front from 19th position.

Don’t be afraid to place him in your lineup.

Elliott was so desperate to win the Clash that he and Blaney made contact in the final turn Tuesday (Feb. 9). Though neither driver won, Elliott still crossed the line in second. He also led 34 circuits en route to victory in the series’ inaugural race on this course last August.

The road course phenom has won the past four points-paying events on this track type and would love to make it five in a row on Sunday. He took home the checkered flag in the past two races at the Charlotte ROVAL as well as Watkins Glen, leading large numbers of laps in each event.

The No. 9 Hendrick Motorsports driver starts on the pole and is sure to control the majority of the race up front, as long as he hits his marks and doesn’t incur any pit road problems. After just missing out on a Daytona 500 victory, Elliott’s hungry for a 2021 win at this venue. Look for him to produce a high DraftKings score.

Though Sunday marks Briscoe’s first Cup encounter on the road course, he did compete in the NASCAR Xfinity Series here. Last summer at Daytona, he led 26 laps before crashing out within the final six laps of the race. However, Briscoe does have a couple of road course victories in his NXS career: 2018 at the Charlotte ROVAL and in last season’s race at Indianapolis Motor Speedway’s road course.

The rookie will probably have to adjust to how his Cup car handles, but could lead some laps. Briscoe’s led at nearly every road course in NXS, including all three races held at the Charlotte ROVAL. Starting just ahead of Truex in 18th, it’s a sweet spot to earn some place differential points.

If the freshman can stay clear of trouble, he’s sure to earn a top 10 Sunday.

Reddick finished a respectable fourth in the Clash a couple of weeks ago. He also had the second-fastest speed late in a run: 108.943 mph, a sign of his increasing comfort with this track. If the sophomore brings that same speed on Sunday, then another strong finish will follow at the Daytona road course.

While he only finished where he began in last year’s race, Reddick was able to gain a few positions in the next road course event, Charlotte, to end in 12th. Before his rookie season in the Cup Series, Reddick earned four top fives and five top 10s in eight road course races in NXS. He’s underrated on this track type.

Though Reddick’s unlikely to win, he could still finish several spots higher than his 24th starting position for Sunday. The Richard Childress Racing driver is also reasonably priced and shouldn’t break your bank on DraftKings.

Although Chastain does have some road course experience in Cup, most of it was driving for underfunded teams. He was able to get the most out of his equipment at the Charlotte ROVAL, winding up in the upper 20s for Premium Motorsports. For them, that’s like a top-10 finish.

Chastain’s now in his best equipment, driving the No. 42 car for Chip Ganassi Racing, and can showcase his skills this season. But the real reason I’m playing him is because of this price. It’s fairly low for a guy with middle-to-top tier equipment underneath him.

Suarez drove for Gaunt Brothers Racing last year, so a 27th-place finish was pretty good in that No. 96 Toyota. However, his best road course appears to be Watkins Glen, a track where he earned two top fives in 2017 and 2018, respectively.

I chose him mainly because this low salary allows me to fit both road course aces Truex and Elliott into my lineup. Also, Suarez is starting 35th for his new team, Trackhouse Racing. The organization has an alliance with Richard Childress Racing, which has done well on road courses.

Suarez wouldn’t need to finish too high to meet his value, either. Look for the flashy Pitbull-owned car to be in the top 20 Sunday.