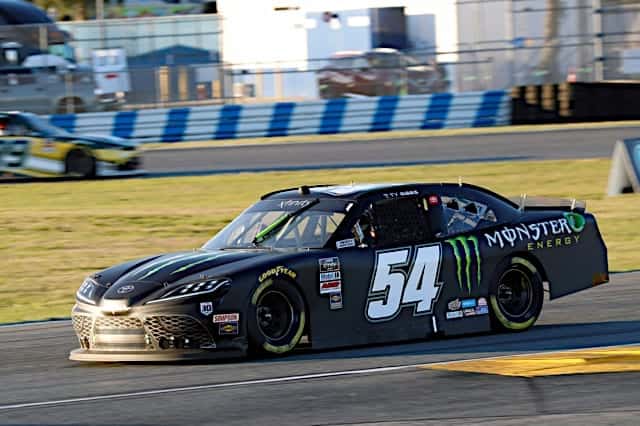 For the first time in a decade and a half, a driver wins in his first NASCAR Xfinity Series start.

Ty Gibbs took the checkered flag in the Xfinity Series’ return to the Daytona International Speedway road course. Gibbs, the grandson of champion owner and legendary NFL coach Joe Gibbs, did so in his first series start, driving the No. 54 for Joe Gibbs Racing.

In an emotional post-race interview, Gibbs called the win a “dream come true.”

“Family is everything, they do so much for me,” Gibbs said. “This is just amazing … I didn’t think this was going to happen.”

Gibbs is the first driver to win in their first Xfinity start since Kurt Busch in 2006.

Seven cautions interrupted the race flow, including a yellow for fluid on the track at lap 4 and a late-race caution for fluid once again, which sent the race into overtime.

The first stage was rather eventful, with last weekend’s winner Cindric taking the green and white checkered flag, albeit with damage after contact with AJ Allmendinger out of the frontstretch chicane. Both Allmendinger and Riley Herbst ended up in the grass with damage, effectively ending their days (Herbst for good, though Allmendinger limped to the finish), and Cindric also garnered damage to the right front of his No. 22.

Despite the damange, Cindric later retook the lead on lap 36, solidifying himself as a contender down the stretch.

The series returns to Florida next weekend for the Contender Boats 250 at Homestead-Miami Speedway on Saturday, Feb  27, at 4:30 p.m. on Fox Sports 1

Not a fan of Ty Gibbs, but I do like to see his victory speeches to see what stupid verbal or physical thing he will do. Making the TV crew sprint a quarter mile for the interview was apropos.