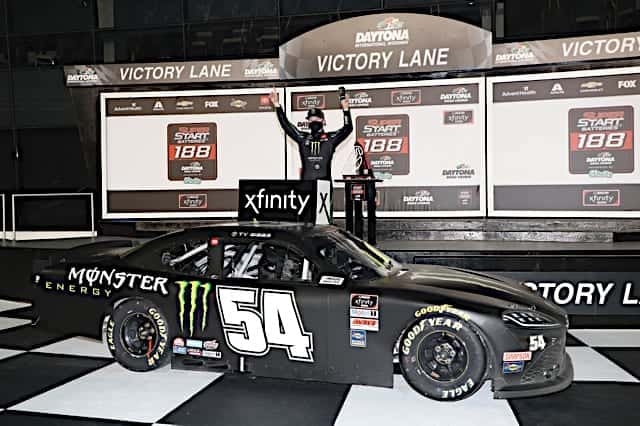 At the beginning of the final stage in the Super Start Batteries 188 in the NASCAR Xfinity Series on the Daytona International Speedway road course, it was Austin Cindric holding off 18-year-old Ty Gibbs. Cindric had downforce issues early Saturday afternoon due to damage from a tangle with AJ Allmendinger at the end of the first stage, and Gibbs was entering the braking zones far better.

Ultimately, Cindric was able to get space between him and the rookie. The defending series champion looked like he might be in for another victory; but then, with three laps to go, a caution for debris waved.

As a result, the race entered overtime. The two best cars – Cindric and Gibbs – entered pit road and were followed by most of the field, with nine drivers staying out. Cindric and Gibbs restarted 11th and 12th, respectively, but avoided the mayhem through the first three corners that resulted in the race going into a second overtime.

This time, Gibbs had the upper hand over Cindric as he restarted fifth, while Cindric sat right behind him in line in seventh. Gibbs took Andy Lally, Justin Allgaier and Daniel Hemric four-wide into the first corner. After plowing through the grass separating the pit exit from the racing surface, the 18-year-old grandson of team owner Joe Gibbs passed teammate Brandon Jones and pulled up right behind leader Jeb Burton.

Gibbs pulled to the inside of Burton as the two entered turn 3, inching ahead at the exit. Cindric found his way to second, but time was up; Gibbs was too far ahead. Wheeling the No. 54 Monster Energy Toyota Supra poised like a veteran, Gibbs gave his crew a wave out the window before taking the checkered flag and his first Xfinity victory, in his first start.

The Daytona road course once again delivered a fantastic and entertaining race. The circuit provides such a variety of challenges for a driver and car to face. It has over-delivered on what to expect from a stock car on the 3.61-mile course. In the late stages of the race, Cindric and his battered car, essentially missing the entire right front corner, struggled in the slower, heavy braking infield section of the course from what appeared to be downforce issues on his right front. However, Gibbs was excelling on this portion, closing up each time on the No. 22. Where Cindric yarded the competition was at the backstretch bus stop and frontstretch chicanes.

Gibbs also earned two accolades with his win. He joins Dale Earnhardt, Joe Ruttman, Ricky Rudd, Terry Labonte and Kurt Busch as drivers who won in their first Xfinity start. He also becomes the youngest winner on a road course in the Xfinity Series, eclipsing Cindric.

The win didn’t come easy, either. On top of everything else, Gibbs had to complete his first live pit stops. While timid in the first couple, he delivered a flawless final pit stop before the first overtime. Gibbs had a fast racecar; it was a Joe Gibbs Racing Toyota, after all. He also drove smart, though, and undoubtedly learned a few lessons while trailing Cindric, the very experienced road racer.

Newcomer to JGR Hemric finished third after running inside the top 10 for much of the race. After running well in the season opener before being involved in a wreck not of his doing, Hemric looks to be off to a good start with his new team. Saturday was his 31st top five and 53rd top 10 in the Xfinity Series through 89 starts. Only time will tell if Hemric can knock the monkey off his back that has kept him winless in NASCAR’s national divisions.

Natalie Decker made her first career Xfinity start, and it didn’t go anywhere near what she planned. On lap 2, she entered the frontstretch chicane ahead of Matt Mills. He got into the rear of Decker’s Chevrolet, and the bottom of her car slid over the turtles. She continued but was told to stop as her car was potentially leaking fluids across the track. Shortly after that, she entered the garage, and her day was over.

Her debut in the Camping World Truck Series was on the Daytona oval in February 2019, where she crashed on the opening lap, and this debut didn’t go much better. In the future, if she makes a Cup Series debut, she might want to choose somewhere other than Daytona.

More trouble struck JGR as a result of a teammate’s actions. Last week, Ty Dillon made a move for the lead while driving the No. 54, which triggered the Big One and took out teammate Hemric. This week, Harrison Burton forgot he was on the road course and not the oval on the pit exit. Burton exited pit road and drove as if he was entering the oval. He realized his mistake, slowed and turned left, creating a traffic jam as he led Gibbs with him, who also had to make a sharp left to exit pit road properly. Justin Haley, Justin Allgaier and Myatt Snider all slowed and even stopped in an attempt to avoid the two JGR cars. Jones didn’t stop in time and hit Snider in the left rear, damaging both vehicles.

Jones rallied to finish fourth, but it still isn’t a great look that two races into the 2021 season, actions from a JGR driver have resulted in misfortunes for others. While it worked out this week, these things tend to not work out on the regular.

The race didn’t start well for Noah Gragson, and it didn’t start on time, either. Gragson’s car cranked and lost power on the grid but didn’t start again; not even a push from a wrecker helped. He and his car found their way to the JR Motorsports No. 9 team pit box, and the team went to work. However, Gragson didn’t start the race until lap 3, where he entered just in front of leader Cindric, two laps down.

The 2020 Xfinity champion made quick work of Gragson, passing him before the second horseshoe in the infield section of the course. Gragson was now three laps down. To add insult to injury, a caution for possible fluid from Decker’s Chevrolet came out moments after Cindric completed the pass. Gragson found himself back on the lead lap for the first overtime attempt but was involved in a multi-car incident in turn three with two laps to go. He finished 28th.

What started as a promising day for Cindric and Allmendinger turned unnecessarily ugly as they raced to the green-and-white checkered flag to end stage one. Cindric had an incredible drive into the final chicane and was right on the bumper of Allmendinger’s Kaulig Racing Chevrolet. Allmendinger potentially took his time through the corner, playing it safe, but the pair exited bumper to bumper. Cindric got his nose just to the inside of Allmendinger, and the two started to drift down; it became decision time for Cindric.

Did he back off, continue to turn left toward the grass and apron, or should he hold his ground? Simultaneously, Allmendinger didn’t want to give the defending Xfinity champion a lane, continuing to move down the track toward the apron.

With the finish line in sight, Allmendinger suddenly hooked left off the right-front of Cindric. The No. 16’s nose hit the grass, instantly digging into it, and Cindric received heavy damage to the right front. Cindric won the stage, while Allmendinger sat idle as the field passed by and failed to earn any stage points. This moment changed the whole complexion of the race and featured poor decisions from both drivers.

The most significant consequence was that Allmendinger’s car was too severely wounded to be any threat to his competitors. He could have easily given Cindric the lane and may have still won the stage. Even if he didn’t, he still had more than half the race ahead and, most importantly, had an intact car capable of winning. Cindric could have backed off for the same reasons, settling for second place in stage one, and both would have lived to fight another lap.

To add insult to injury, Riley Herbst was an innocent bystander as he took evasive action to avoid the sliding Allmendinger. He turned left and flew through the trioval grass, ripping apart his splitter and ending his day.

The matchup between Allmendinger and Cindric will not go away this season, as the two are arguably the best road course drivers in the series. Is this the start of a rivalry between Allmendinger and Cindric? Possibly, but we’ll all have to watch how the two race one another on ovals over the next few months. They were the two favorites coming into this race, and when the next road course race at Circuit of the Americas (May 22) arrives, they will once again be the favorites. No doubt, replays of this accident will be shown multiple times, reminding both about the incident.

Allmendinger will unquestionably want that corner back for a do-over for weeks to come.

Brandon Brown earned a career-best road course finish in the Xfinity Series on Saturday. He, like Hemric, spent time in the top 10. After pitting before the first overtime, he restarted 18th. Following the first overtime restart, Brown avoided disaster and restarted eighth for the second overtime restart. He finished eighth, improving his previous best of 11th on the Indianapolis Motor Speedway road course last July.

“I just hit a small bird with my left front headlight.” – Austin Cindric

“I just can’t thank everybody right now. Really, this is like a dream come true to me. This is awesome. I can’t do burnouts! So that’s one thing I can’t do at all.” – Ty Gibbs

“Obviously, I don’t want to be racing to a stage probably that aggressive…Hopefully, we can avoid something like that because obviously AJ (Allmendinger) we’re going to be fighting later [this season].” – Austin Cindric

The COVID-19 pandemic has forced many difficult decisions for NASCAR with its schedules. Ongoing challenges due to COVID-19 resulted in NASCAR dropping Auto Club Speedway from the NASCAR Xfinity and Cup series schedules for 2021 and Auto Club’s dates were shifted to the Daytona road course, while Homestead-Miami Speedway’s planned Camping World Truck Series race was moved to the Daytona road course, too. These moves resulted in the 2021 NASCAR season beginning with back-to-back weekends at the World Center of Racing, bringing a fresh, unplanned, extended meaning to Daytona Speedweeks.

During a Feb.12 media conference, NASCAR President Steve Phelps said that additional changes and variations to the NASCAR schedule in 2022 were possible. I would not be opposed to seeing the Daytona road course becoming a permanent addition to NASCAR’s top three divisions in the future to bring Speedweeks (as in, more than one) back to Daytona Speedweeks.

The clear obstacle, however, is where does NASCAR take a date from, if necessary? Is NASCAR able to negotiate an agreement with broadcast partners to add a race? Those and others are questions for another day. But the Daytona road course has delivered great racing for a circuit that was never on an original schedule.

For a third straight week, the Xfinity Series returns to the Sunshine State but this time, from Homestead-Miami Speedway. Next Saturday (Feb. 27), the Contender Boots 300 starts at 4:30 p.m. ET on FS1 and MRN. Harrison Burton and Chase Briscoe claimed victories last June when the Xfinity Series raced a doubleheader at Homestead, following a reshuffling of the 2020 schedule. After Homestead, the Xfinity Series makes the annual spring pilgrimage out to the West Coast with stops at Las Vegas Motor Speedway (March 6) and Phoenix Raceway (March 13). 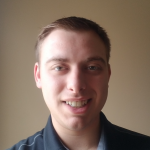