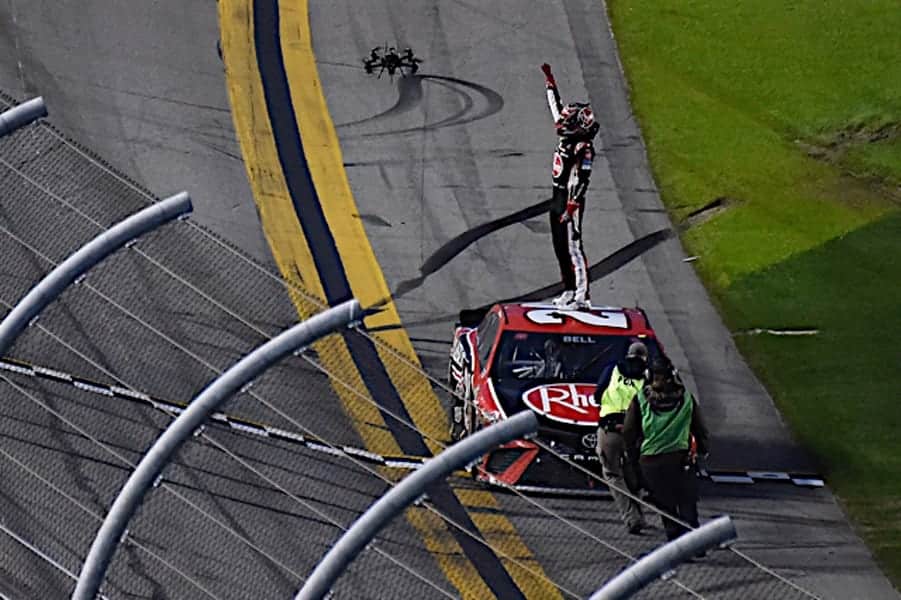 It took until the final pair of laps, but Christopher Bell made it back-to-back first-time winners to kick off the 2021 NASCAR Cup Series season.

Bell passed Joey Logano in the waning laps of Sunday afternoon’s O’Reilly Auto Parts 253 at the Daytona International Speedway road course, chasing down the No. 22 and cruising to his first career victory in his 38th Cup start.

Chase Elliott led from the pole, starting alongside Michael McDowell, who scored his first win last week in the Daytona 500. McDowell’s opening lap was plagued with issues, though; he overshot the first turn, had an off-track excursion shortly after that damaged the splitter of his car and ended up losing a tire on the backstretch.

It was an eventful first lap for the #DAYTONA500 champion, @Mc_Driver ?. pic.twitter.com/9U2RZIIlF1

Kyle Busch fared little better, going into the grass slightly after locking the brakes and suffering damage to his right front. Elliott retained the lead on the restart, gapping the field quickly as chaos unfolded behind him. Chase Briscoe and several other cars went sliding on the backstretch chicane, Matt DiBenedetto blew a right rear tire and tore apart that section of his car and Jones suffered a flat as well. Brad Keselowski was the first driver to miss a chicane, stopping and then pitting on the frontstretch.

Keselowski recovered enough to battle with Team Penske stablemate Logano after another caution; Elliott pulled away for the win, while the two teammates, who had the last-lap run-in in last week’s opener, made up the next two spots. Keselowski finished second, Logano third and Denny Hamlin fourth.

AJ Allmendinger started making waves in Kaulig Racing’s No. 16, passing Logano for fourth before another caution slowed the field down. That was for Ross Chastain, who slammed the outside turn 1 wall after contact with Ryan Blaney. Allmendinger stayed out and held off the field for a while, but Hamlin overtook him for the top spot and the No. 16 began to fall back on old tires.

Chase Elliott: ‘I Made Too Many Mistakes’

Hamlin won the second stage, his third of the four stages to open the season, but Kurt Busch‘s crew executed on their pit stop and got the No. 1 out front for the restart.

That lead didn’t last long. Busch went wide in the infield and skidded through the grass, keeping the car straight but spinning before he hit the track surface again. The brief landscaping kicked up dirt around the car, but no caution waved and Busch lost more than 20 spots.

getting reports that Kurt just wanted to put on a show for y’all and drive up through the field again so no worries pic.twitter.com/9VOJDhzb2l

Bell inherited the lead but Elliott made short work of the No. 20, pulling away before Bell’s Toyota started to close back up in his rearview mirror. Final green-flag pit stops hit before Bell could attempt a pass, and the cycle lost the No. 20 about two seconds to Elliott’s No. 9.

With just 17 laps left and a rainbow overhead, reports of precipitation filtered through the radio and led to a number of teams getting out their sets of rain tires, shortly followed by a caution for weather.

Restarting with 12 to go, the restart went off without issue until Tyler Reddick went off-roading, hit a sign and caught fire, bringing out a caution. Elliott also had an off-road excursion, skidding into the grass but saving the car.

The next restart didn’t go much better, as Martin Truex Jr. drove into the first turn a bit too deep and slammed into Bell, but only the No. 19 spun: several other cars were involved in the melee, including Justin Haley, who had to drive in a loop to get back going the right way. Haley’s Spire Motorsports teammate Corey LaJoie, in the No. 7, was punted by Elliott after having a role in the No. 9’s off-track incident minutes earlier.

Logano led off the restart and jumped to a two-second lead as Kurt Busch and Bell battled for second. Kyle Busch, Austin Dillon and Chris Buescher sandwiched each other on the trioval apron, forcing the No. 18 to pit road, while Larson and Elliott both had spins in the closing laps.

Bell eventually got around Kurt Busch for second, setting his sights on leader Logano and slowly closing on the No. 22. Briscoe’s hood detached from its moorings and flipped back over the windshield, but the rookie was able to see and continue.

Bell, meanwhile, closed on Logano and, after a short battle, got by the No. 22 with a lap and a half to go. The driver, new to the No. 20, pulled away from Logano and executed a perfect final lap, winning his first career race and locking himself into the playoffs.

.@CBellRacing muscles the lead away from the No. 22 coming to the white flag! pic.twitter.com/uPEdfpXa54

“This is definitely one of the highlights of my life so far,” Bell said in his post-race interview. “Just so incredibly thankful to be here at Joe Gibbs Racing…[they] believed in me from day one. I prepared my whole life for this moment to race in the Cup Series; last year was a huge learning curve for me, and I’m very grateful that I got the opportunity to run in Cup.”

? @CBellRacing gets the job done at the @DAYTONA Road Course! pic.twitter.com/Zeh9CuJEuN

Bell was asked whether he thought he had enough time to catch up to Logano.

“No, I really didn’t,” he said. “Whenever we pitted and we came out, I liked where I lined up, but then the yellows kept coming and I thought the yellows were hurting me because I felt like I needed laps to get up through there. Honestly, I didn’t think I was going to get there – [crew chief] Adam [Stevens]…kept telling me that I was gonna get there. I didn’t believe it, but he really struggled coming down into [turn] 6 one time and allowed me to close the gap.”

Bell’s victory marked the first time since 1950 that NASCAR’s premier series featured a pair of drivers winning their first race in the season’s first two events.

bubba’s in the playoffs, 13th. His finishes of 17th & 26th are paying dividends. go bubba go… bubba was praying for that rain caution cause he was in 34th.