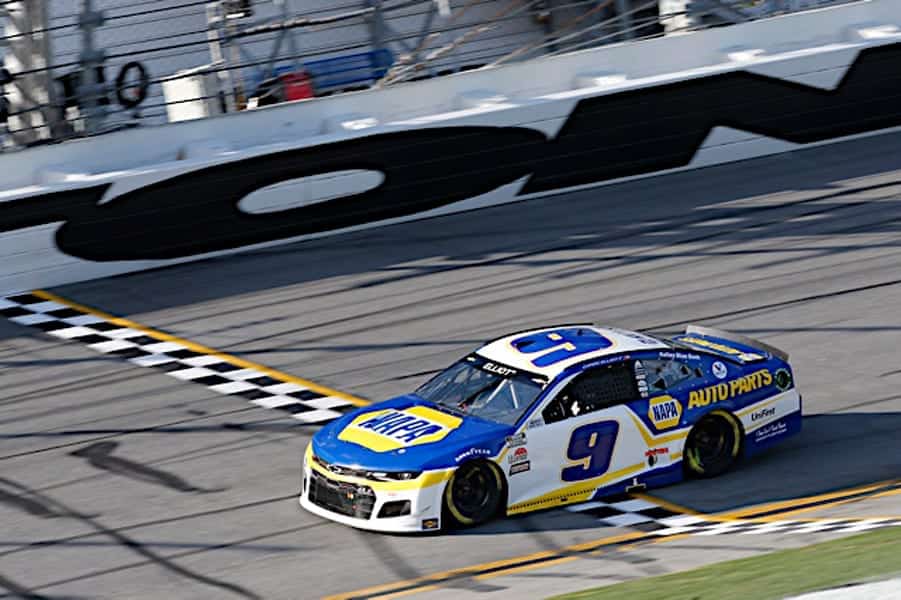 But rain, slow pit stops and on-track mistakes left him mired back in 21st by the end of the day.

“When you have those late-race cautions like that and you have a mixed bag of who stays [out] and who goes [to pit], it’s a bit of a gamble either way, I felt like,” Elliott told FOX after the race. “I thought tires was the right move, tires won the race so I think it was the right move. But you get back in traffic, it just gets to be so chaotic and then just depending upon who gets through and who doesn’t kind of determines how it’s going to shake out.

“I hate it, I made too many mistakes, went off track. Just a bad day. We had a fast NAPA Chevy and I appreciate the effort.”

The No. 9 Hendrick Motorsports driver led a race-high 44 laps from the pole and was at the helm over Christopher Bell on lap 57 when NASCAR waved the yellow flag for rain. Elliott and Bell opted to pit for slick tires while 10 other cars stayed out on the track. A slower pit stop from the No. 9 crew put him in 15th, three spots behind Bell.

When the race restarted with just over 10 laps remaining, Elliott tried to make up several positions and ended up in the grass after some contact from Corey LaJoie.

Bad luck for Chase Elliott. Incredible luck for that sign.

”I hate it for Corey,” Elliott said. “He ran me off there so I thought he was going to take the lane again. So I went to cross him over and I think that time he was actually going to give me a lane. Go figure. [We’ll] try again next week.”

Elliott was able to get most of the grass off his car and made a good recovery until the final five laps. After the caution came out a couple of times, Elliott was looking to take fourth away from Brad Keselowski. As he used his bumper on the No. 2, Denny Hamlin also closed in and bumped Elliott, causing him to spin and lose more positions.

Bell ended up avoiding the mishaps and overtook Joey Logano in the final two laps to win his first Cup race.

Elliott will have six more chances to win on a road course this year, including at series newcomers Circuit of the Americas, Road America and the Indianapolis Motor Speedway road course.

What’s up with that no penalty call for Chase’s right front loose tire. The three stooges try to explain that his crew intentionally did a slow tire change on the left front for forgiveness. Slow is relative. Who’s to say it was slow enough? Another NASCAR blunder showing how they treat the anointed one.
Also why are the three stooges at the track booth. It is obvious they only look at the monitors and not out the window and watch the actual race. NBC save some money and keep them in Charlotte.
I don’t like this new FS format.

I mean Fox Sports not NBC.