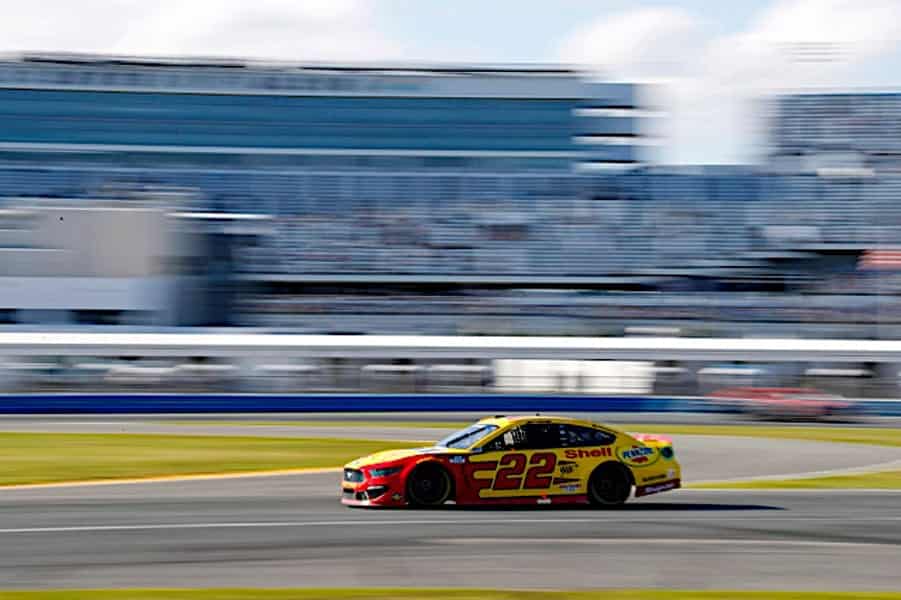 Joey Logano is probably tired of being happy for his competitors.

Through two races in the 2021 NASCAR Cup season, the Daytona 500 and Sunday’s (Feb. 21) event on the Daytona International Speedway road course, Logano has been seen leading the field with two laps to go.

Each time, though, the Team Penske driver has wound up expressing how “happy” he was for someone else to win.

Last week, Logano led at the white flag. But it was Michael McDowell who claimed the victory in the 500 after Logano and a number of other drivers were collected in a fiery wreck.

“It’s a real bummer that none of the Penske cars won, but at least a Ford won and I’m really happy for McDowell,” Logano said afterward.

A week later, Logano was on old tires when Christopher Bell, driver of Joe Gibbs Racing’s No. 20 Toyota, overtook him in turns 3 and 4 of the oval track portion as they raced to the white flag.

Logano wound up the runner-up finisher, 2.1 seconds behind Bell.

“We gambled by staying out [of the pits] and then I’d say it paid off overall, but you just hate being so close and one lap away,” Logano told Fox Sports post-race. “But congratulations to Christopher. It’s his first win and I know that means a lot. It’s always a special one, so I’m happy for him, but not so happy for myself at the moment.”

With the official close of NASCAR’s Speedweeks in Daytona, Logano is second in the point standings behind Denny Hamlin (-12 points). That’s after Logano had stage finishes of second and third Sunday. Hamlin, who wound up third overall, won the second stage.

“Any way you look at it, every race we’ve run so far, we’ve been in contention to win,” Logano said. “We’re doing the right things. Look at the Duel. We almost won (finished fourth). (Busch) Clash we finished third. Daytona 500 we were leading on the last lap, crash. Then you come here, you’re leading with two to go, get passed.

“We’re there. I think we’re doing a good job. When I think of the execution of this race team, we’re doing all the right things. “

Logano feels the No. 22 team is “outperforming” what their car is capable of this early in the season.

When it comes to road courses specifically, Logano observed that it “seems like the Gibbs cars definitely made a substantial gain on keeping up with [Chase Elliott]. I feel like we’ve made a gain as well, but we’re still a step behind on the long runs. Short-run speeds are very competitive; our braking is competitive.”

The Cup Series won’t visit a road course again until May 23 for the inaugural race at Circuit of the Americas in Austin, Texas. That will be the second of seven scheduled road course races this year. It will also be the next time the series will get practice time on a paved track before the green flag on Sunday.

“I mean, we all miss [practice], right?” Logano said. “I actually like it. I enjoy practice. It’s fun to me. We’ll have our chance to practice on a road course when we get to COTA. Up to then, the hard part is, it’s very clear, every time we come to a road course now, it’s been (Elliott), then one step back is the [Joe] Gibbs [Racing] cars, feels like the next step back has been our car.”

Logano and the rest of the teams now head to Homestead-Miami Speedway, where he claimed his first Cup title in 2018 with a race win. A 27th-place finish there last year was his only result worse than sixth at the 1.5-mile track in his last six starts.

no practice is an equalizer and a curse . as far as logano goes liten up people there has just been 2 points races and he was in contention for both