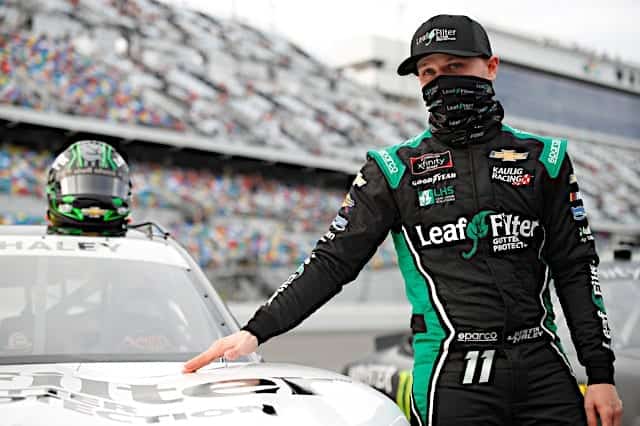 The hours leading up to the O’Reilly Auto Parts 253 at Daytona International Speedway’s road course were essentially a mirror image of last week’s Daytona 500: one car failed inspection twice, forcing them to start at the rear of the field for the race that afternoon.

NASCAR Cup Series team Spire Motorsports slotted Xfinity Series pilot Justin Haley in for its No. 77 at the road race. The Chevrolet, though, failed inspection twice before the race and the team was penalized prior to the green flag.

Haley is set to start at the back as punishment, while Richard Petty Motorsports’ Erik Jones will also fall to the rear of the starting grid after the No. 43 changed engines during Speedweeks; he was forced to start at the back in the 500 last week and does the same this afternoon. Garrett Smithley, driving Rick Ware Racing’s No. 53, will also be sent to the rear for unapproved adjustments.

Haley to the rear (he's in the 77) for 2x tech failures (they passed on third try) and Jones to the rear for Daytona 500 engine change. #nascar @NASCARONFOX

The O’Reilly Auto Parts 253 will kick off shortly after 3 p.m. ET on Sunday, and fans can watch drivers turn left and right on the main FOX station.