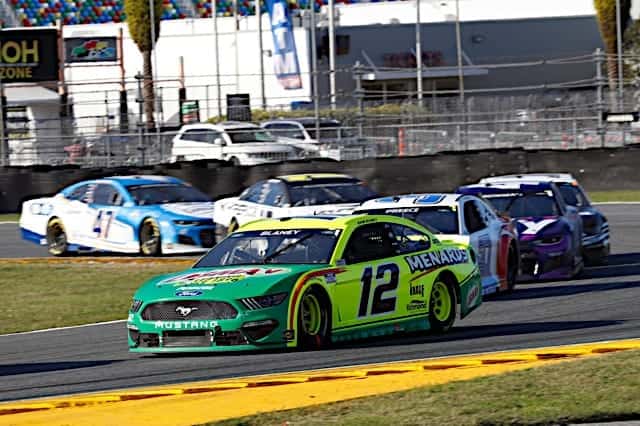 Denny Hamlin had just finished third in Sunday’s NASCAR Cup Series race (Feb. 21) on the Daytona road course when he was asked the question.

How did he feel about the historic number of road courses — seven — that are on the schedule this season?

In his 33rd career Cup start on a road course, Sunday’s result was his 10th top five, which includes one win at Watkins Glen International.

But Hamlin’s answer didn’t sound like it came from someone particularly fond of turning left and right.

The reporter who asked the initial question asked if he was being sarcastic.

Tell us how you really feel, Denny.

When NASCAR blew up its schedule for the 2021 season, it really blew it up, increasing the number of road course events by five from 2020.

The Cup Series won’t race at a road course again until May 23 at the Circuit of the Americas in Austin, Texas, the inaugural event on its 3.41-mile, 20-turn layout.

Two weeks later, NASCAR is scheduled to visit Sonoma Raceway (June 6) after a one-year absence due to the COVID-19 pandemic. But four months is a long time and the pandemic isn’t going anywhere. I wouldn’t be surprised if something happens to that race date like what happened to Auto Club Speedway’s date this year.

The final four road course dates for Cup: July 4 at Road America (first series visit since 1956), Watkins Glen (Aug. 8),  the inaugural race on the Indianapolis road course (Aug. 15) and then the road course season ends with the fourth race on the Charlotte ROVAL in the playoffs (Oct. 10).

How do I feel about this dizzying amount of road courses?

I’d rather be dizzy than bored.

Could NASCAR clean up how it handles caution periods on road courses? Sure. But not all road courses are like Daytona’s.

I can also take a few small headaches in exchange for getting more frequent memorable races throughout the year. And over the last decade, beginning with Marcos Ambrose’s thrilling win over Brad Keselowski at Watkins Glen in 2012, road courses have been a more consistent producer of thrilling, white knuckle “did you see that!?” moments.

I’m running out of digits to count those moments. Meanwhile, I’d struggle to come up with a top-10 list of highlights from 1.5-mile tracks in the last 10 years.

Keselowski, who finished fifth Sunday after missing both chicanes at least once and being spun by Kurt Busch in turn 1, explained at least part of road course racing’s surge to the forefront of the NASCAR world’s attention.

His comments came in relation to a question about how NASCAR officiates races on road courses.

“The reality is a stock car is not meant to race on a road course and there are some compromises that are made across the board,” Keselowski said. “I think part of what people love about watching us race on road courses is the fact that the cars drive so incredibly awful bad that it can sometimes make for a very compelling race because there are a ton of mistakes.

“Any little issue is magnified and multiplied, so that means NASCAR has to officiate the race, I think, differently than all of us would like, but it’s kind of part of the trade-off in my mind for running on a road course. The alternative is we could go back and run more short tracks. I think I would be OK with that, but as of now that’s not the way the pendulum has swung and we’ll have to reap what we sow.”

Keselowski’s point was magnified Sunday seemingly every time cars roared through the tight confines of the infield. Cars regularly overshot the first turn and sharp right-hander after the esses. Kurt Busch caught a curb wrong while leading and was sent into a spin through the grass. Corey LaJoie forced Chase Elliott off the very narrow track and Elliott barely saved his car. Kyle Larson misjudged a slide job and became intimate with a tire barrier.

For the final 11 laps, you couldn’t look away. It culminated in Christopher Bell’s pass of Joey Logano for the win with two laps to go.

For Logano, who finished second, the increase in road courses is “the right thing for the sport.”

“You look at the strategy that comes into play, last night, tonight, even in the Truck race, the strategy really is interesting when you have this much falloff,” Logano said. “It’s fun because, not all the time, but more times than not, it’s not always the fastest car that wins. You’re someone like us today, we almost manufactured a victory by doing something different than the fastest cars. We were a fifth-place car. We had a way to try to win and go for it, and we came really close to it.

“That’s the fun part about it, is that you’re never really out of it. You can do a lot of things, recovery. You look at the top 10, those guys weren’t up there all day long at all, I promise you that. The end of it kind of became crazy as you would expect. …

“It’s fun. I like it as a driver because I’m not doing the same thing every week.”

Was the Daytona road course a good race?

NASCAR needs to change procedure for stage pitting – this applies universally, not just some tracks. Cars retain position pit in to pit out as long as a time static in pit (set by NASCAR) is not exceeded. Exceed that time and lose the spot. After stage servicing, cars line up behind pace vehicle at a designated point on the track and wait – stationary – for direction to move. Forming the field for restart should be achieved quickly, to minimize fuel consumption and reducing lap count, so the fans present or watching at home can see more actual racing.

….so what are your thoughts on road courses?

When I read abbot all the changes that are going into the next generation Cup cars, I think they sound more like road-racing cars with their independent rear suspension, six-speed transmissions, etc. I take Keselowski’s point that the current Cup cars are ill-suited to running on road courses, but perhaps the next-gen cars will be more capable on the road courses.

The feedback from Martin Truex Jr. after his Charlotte Roval test last year indicates this will be the case.

If NASCAR is going to make road courses a significant part of the schedule, they really need to consider local cautions when possible. When there were only two road courses a season I can see why they would be reluctant to have any more “special road course rules” than absolutely necessary. However with damn near a quarter of the races on road courses they need to address a lot of things to make it the best race it can be.

Yep. If nascar insists on full course cautions at these road courses, COTA is going to be a sh**show. Nothing will turn away fans faster than 3 1/2 miles of caution laps.

I think the final nail in the coffin is when they start going electric. The most asinine idea I have ever heard, and I’m sure I’m not alone in that thinking, but since when has Nascar ever listened to their fans opinion