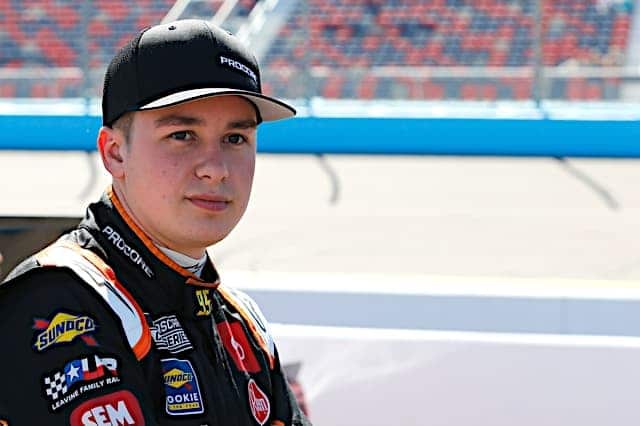 Bell’s win is maybe less surprising than McDowell’s; he’s in Joe Gibbs Racing equipment, but that it came on a road course is an eye-opener. Paired with two-time champion crew chief Adam Stevens, Bell is probably going to win again before this year is out. It’s hard to call anyone a title favorite two races in, and it’s hard to call Bell one regardless, but he could make himself one if he can be consistent.

It was an adventure, but Kurt Busch found himself in great position late in the race, coming home fourth. Busch had a strong No. 1 car; he led early, but got off track and dropped from the lead to 27th place in the blink of an eye after sailing through the infield grass. After that, it didn’t seem as though Busch would be a factor, but as the race entered the final laps, there he was.  The 2004 champion is a good road racer, and despite his side trip early, showed that he can turn right with the best of them on Sunday.

After his sensational NASCAR Xfinity Series debut on Saturday, it has to be only a matter of time until Ty Gibbs is in one of his grandfather’s Cup cars. Gibbs won in his first series start on the Daytona International Speedway road course without the benefit of practice or qualifying. Gibbs won six races in the ARCA Menards Series last year but couldn’t run for the title because he was too young to compete on every track.

The young Gibbs certainly looks like he’s going to be a wheelman, but the worst thing that Joe Gibbs Racing could do is rush him through the ranks. He’ll race for the ARCA title this year, and from there, he’ll likely move into a Camping World Truck Series or Xfinity ride. But nobody should be thinking about Cup just yet. Even the 2023 season seems like too fast a timeline for a driver who’s still a teenager.

Cup is a huge test for drivers. In fact, the level of competition is a massive step higher than other series, and while JRG might be the biggest fish in the ARCA and Xfinity ponds, it’s just one in the dog-eat-dog Cup garage, where there are other teams who can compete with JGR financially. Putting a driver in that situation before he’s had enough experience has been the ruin of many promising youngsters. Gibbs looks like he could be the real deal. One of these days that’ll be put to the ultimate test. Let’s hope it’s not too soon for him.

Daytona 500 champion McDowell had a great opportunity as his finish last week put him on the front row for the start. However, he fell back right from the start after overdriving in the infield portion of the track, going wide and falling quickly back. For an underfunded team, that could have meant a chance squandered, but McDowell fought his way back, working his way into the top 10 and backing up last week with an eighth-place finish this week.

Busch Clash winner Kyle Busch Suffered some front-end damage from the chain reaction to McDowell’s early troubles, but that wasn’t what relegated him to 35th place. Busch tangled with a pair of cars exiting the frontstretch chicane fighting for position in the closing laps and slapped the wall in the trioval, ending his chances for a top finish.

Rookies Chase Briscoe and Anthony Alfredo finished 34th and 22nd respectively, but while Alfredo had a relatively quiet, solid day, Briscoe’s race was eventful. Running in the top five with a handful of laps remaining, Briscoe suffered some damage as the field bunched up. Adding insult to injury, the hood of the No. 14 blew off and settled on the roof of the car, still tethered as NASCAR requires. Briscoe made it a lap that way before being forced to pit road. He finished on the lead lap, but far from where he had hoped.

Road course ace and polesitter Chase Elliott led 55 of 70 laps in the race, but a late mistake cost him a chance at a fifth straight road course victory. Elliott had to race his way back to the front after a late caution for rain. He was moving through the field but made a costly mistake, trying to fill a hole that wasn’t there. He spun and dropped 20 positions before recovering to 21st.

Elliott might have run away with the race if not for Mother Nature.  A late caution for rain brought him and Bell to pit road for fresh tires, but a pack of cars, led by Logano, stayed out, leaving Elliott to restart 12th. He worked his way back to the top five but made the mistake that cost him a good finish. Had the rain not happened, Elliott probably could have held his lead over Bell in the final laps, or at worst dropped to second. Instead, his hand was forced as the leader and the complexion changed. Elliott used strategy to contend in the Busch Clash two weeks ago, his only chance to get to the front. This time, he was a sitting duck, and his aggressive driving to get back to the front finished his bid.

With two first-time winners in two races this year, will we see a third? Probably not this coming week; the odds are against three in a row. This week, the Cup Series heads to Homestead-Miami Speedway, a track which will favor the wealthy teams, the equalizers of the superspeedway and road course in the rearview for now.

While it’s unlikely that another driver will break into victory lane this weekend, how many new winners (and playoff contenders) will we see in 2021? Equipment will play a role, though there are a handful of drivers with the cars and the talent to takes wins this year: Matt DiBenedetto, Tyler Reddick, Bubba Wallace, Ross Chastain.  That expands on the superspeedways, but those four seem like the next winners will come from their ranks. They’re worth keeping an eye on as the season goes on. Who’s next?

How… many road course races are too many?

This year’s Cup schedule features seven road-course races, the most in a single season in history. The original schedule had six, but the uncertainty surrounding COVID-19 forced the decision to cancel the race at Auto Club Speedway. NASCAR made the decision to stay in Daytona for another week, which wasn’t a bad decision since winter weather doesn’t allow much wiggle room as far as location.

The addition means that there are now more Cup races on road courses (seven) than short tracks (six). Is that too many?

If there are still seven road courses and six short track races on the schedule in four or five years, then yes. For now, until NASCAR can work with tracks to bring new venues into the fold, it’s certainly better than more races on 1.5-mile tracks. Road racing is a skill drivers should have to demonstrate at this level, and because teams typically build cars just for road races, adding a couple makes sense. Four in a year seems right, maybe five, and if NASCAR were to keep the traditional road courses at Watkins Glen International and Sonoma Raceway and the playoff race on the Charlotte Motor Speedway ROVAL, which track ownership is highly unlikely to give up, the fourth course could conceivably change from year to year.

Are the right turns here to stay or merely a stopgap until there are more viable options to bring variety to the schedule? Hopefully, it’s a little of both.

What a weekend of racing though. Lot of fender rubbing and hard racing. It is a shame to see guys days ruined for brushing or going through the grass on a road course but I believe that won’t be an issue with the new car design.

That rain caution at the end of the cup race really changed the outcome of the race. You could list a dozen drivers that the caution helped, and a dozen that it hurt.

For me, I just enjoyed how hard everyone raced. No one seemed to really ride and be OK with their finishing position. Guys were pushing hard from the drop of the green and these cars drove like crap on this course. Drivers had to wheel these things and were pushing it to the limit every lap regardless of position (see Kurt going off track while leading) and so many made mistakes. It just goes to show – when the cars handle like crap and aren’t glued into the track and you have little aero impacts due to speed, you get some excellent racing all over the track.

Now back to the aero reality of Homestead next week where side force and who can hold it wide open the longest will be the story of the front runners.

I wouldn’t call what Chase did a “mistake.” It wasn’t that he was trying to “fill a hole that wasn’t there.” It was that he couldn’t quite complete the pass on Keselowski before the pack caught up and Hamlin spun him out. The “mistake” was the bad pit stop during the rain caution.