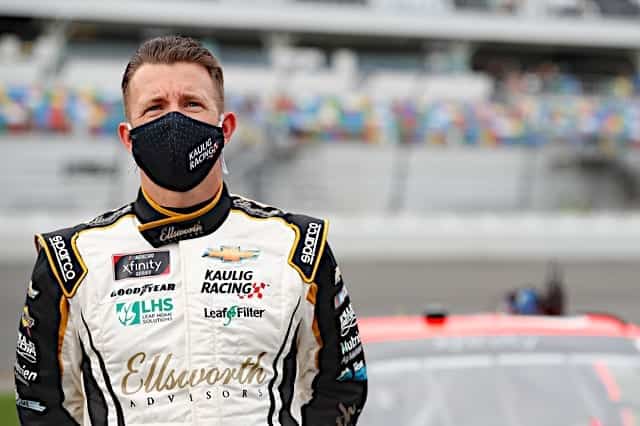 It has been nearly three years since NASCAR veteran AJ Allmendinger has taken his place behind the wheel of a NASCAR Cup Series car. The last time we saw the Dinger on NASCAR’s premier level was in 2018 driving the No. 47 Chevrolet for JTG Daughtery Racing.

Since then, the 39-year-old has stayed engaged in the sport by running numerous NASCAR Xfinity Series races, which led to a full-time stint at Kaulig Racing in 2021.

Coming off of a disappointing Xfinity race on Saturday in which Allmendinger was favored, he drove Kaulig Racing’s lone entry in the Cup Series behind the wheel of the No. 16 HyperIce Chevrolet Camaro 1LE. Starting from the 34th position, the road course ace’s work was cut out for him. By lap 6, Allmendinger had raced into the top 20. After a late pit stop during a caution, Allmendinger settled to finish 17th in stage one.

The Los Gatos, California native entered the top five early in stage two and stayed out under caution to obtain the lead with five to go in the stage. The Dinger was able to lead a lap before finishing ninth in stage two.

The final stretch was eventful, to say the least. A speeding penalty on pit road under the stage break pitted Allmendinger at the back of the pack. After re-entering the top 20, another bump in the road struck when the No. 16 suffered a flat tire with just over 10 laps to go. After multiple cautions late in the race, Allmendinger snuck into the top 10 with five laps remaining. He improved that spot by three positions to come home seventh and bring Kaulig Racing its first Cup Series top 10 ever. Allmendinger is expected to make multiple starts for the organization in the Cup Series and should be one to watch after what he showed at Daytona.

It’s very plausible that Michael McDowell has not come down from cloud nine yet after his Daytona 500 upset. For a while, it looked as if he would come off of that cloud at the Daytona Road Course.

Starting on the front row, McDowell experienced an unusual feeling in his car for a brief moment during pace laps. However, he thought it was routine for the car. As the field dove for turn 1, McDowell overshot the turn and cautiously returned to the racing surface; but something was wrong. Last week’s winner hit the grass shortly after getting back on track, damaging the splitter. It appeared that the No. 34 Ford Mustang had blown a tire entering the first turn. McDowell limped back around to pit road. Shortly after, his car experienced a “ripping” noise from the engine. However, the problem would dissolve and McDowell would return to the track.

The Phoenix, Ariz. native soldiered on throughout the race, avoiding incidents and major miscues. Thanks to a handful of chaos near the end, McDowell took it to his advantage to finish in the eighth position and earn back-to-back top 10s.

“That was way too much excitement for me.” McDowell told NBC Sports following the race. “The FR8 Auction Ford Mustang was actually really good. We had a flat tire there coming to the green. I knew something was wrong. I should have just pitted, so I screwed that up and that hurt us a little bit. We lost track position and then missed the chicane.

“Pretty much everything that could go wrong went wrong today, but this is what our team is all about, we grind it out and fought hard. We just kept the fight in it and ended up with another top 10, so pretty crazy how that all went down. It was another great run. I’m really excited to keep this momentum going. We’ve got to clean it up a little bit, but not a bad night altogether.”

Ryan Preece started out the year in a completely opposite direction from how his 2020 season went. After earning a top 10 last week, Preece kept the momentum going by finishing ninth on the road course.

“Our No. 37 Kroger/Coca-Cola Chevrolet was the best road course car we’ve had.” Preece told NBC Sports. “We struggled early in the race needing a little more forward drive, but Trent (Owens, crew chief) made some really great adjustments and kept working on it to get us where we could make moves. I’m really proud of everyone at JTG Daugherty Racing for giving us a car that was fast and even with the damage from a late-race caution, we were able to hold our track position and get a second top-10 finish for the season. It’s been a great start so far.”

Other Cup drivers had very solid days in the second race of the season including Chris Buescher (11th), Daniel Suarez (16th), and Ty Dillon (19th), who failed to qualify for the Daytona 500 a week ago.

The NASCAR Xfinity Series also made twists and turns on the road course this past weekend. Brandon Brown turned in another solid performance with an eighth-place result. Jeremy Clements, a strong road course driver, also snuck into the final position inside the top 10 after a solid day. Brett Moffitt (11th), Landon Cassill (12th), and Jesse Little earned respectable top-15 performances.

In an eventful and seemingly never-ending NASCAR Camping World Truck Series race on the Daytona road course, Timmy Hill led the way with a ninth-place performance. Hill also competed in all three series. Camden Murphy earned a 13th-place result in his season debut, and Carson Hocevar followed up his fifth-place finish in the season opener with a solid 14th on the road course.

The NASCAR Camping World Truck Series drivers get the week off, but the other two series remain in the Sunshine State for their third races of the season at Homestead-Miami Speedway, which was originally scheduled as the second event of the year before Auto Club Speedway was canceled.

Being an intermediate track, Homestead-Miami will present a test for the underdog teams. Bubba Wallace finished 13th in this race last season while McDowell came home with a top 15 as well, finishing 15th.

In Xfinity, each race seems to offer an opportunity for a mid-pack team to rule the dog yard. Drivers like Moffitt, Clements and Brown should have a chance at cracking the top 10 or 15 at HMS after showing potential during last summer’s doubleheader weekend at this 1.5-mile oval.

What a @NASCAR Cup Series return it was for @AJDinger! He drove from the back to the front multiple times to earn us our first Cup top10! ?

The No. 16 @Hyperice Camaro looked EXCELLENT up front & leading laps for the second weekend in a row!#TrophyHunting | #MoveBetter pic.twitter.com/C5krAuw5bn

Well done, @Mc_Driver! Way to stay in it and #NeverGiveUp. ? https://t.co/kUaZDDpNvK

Checkered flag is in the air at @DAYTONA as @brandonbrown_68 and his @JabsDesignBuild Chevrolet cross the line P8! ? pic.twitter.com/q6HQ0xw5ve

9th place finish for our No.56 team! It still amazes me that we can take a unsponsored truck that has no funding, with only 1 employee & compete with these big teams. That’s why I love the @NASCAR_Trucks. Gives the little guy a chance. pic.twitter.com/S0sNezDovk

Allmendinger would have done better if he hadn’t decided to be an asshat and try to run Cindric into the rhubarb. That blew up on him real good. Looks good on him. He’s an arrogant entitled doofus.