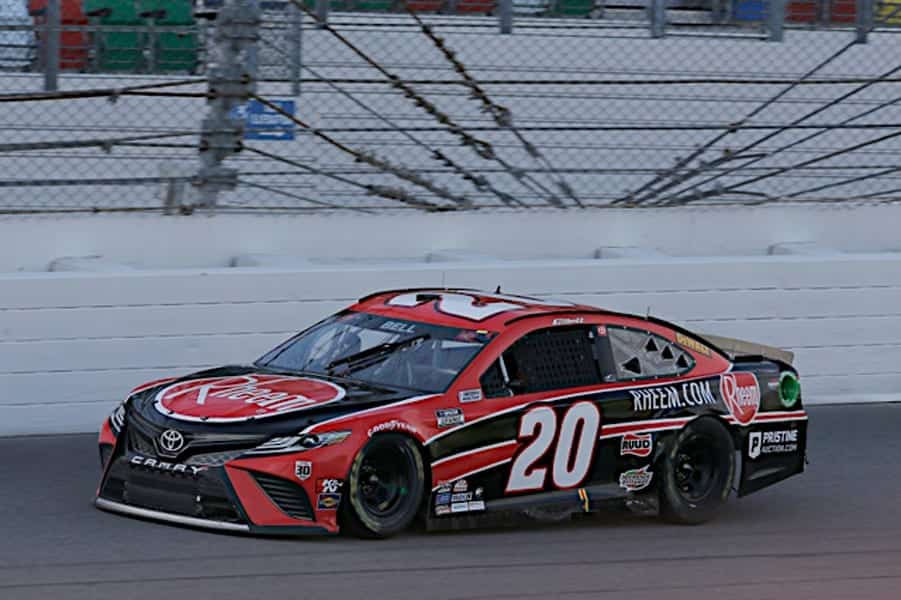 Christopher Bell showed Sunday (Feb. 21) at the Daytona International Speedway road course that he is worthy of his ride at Joe Gibbs Racing. A surprise win in the O’Reilly Auto Parts 253 provided proof just two weeks into the job.

After a rookie season in which he finished 20th in points for now-defunct Leavine Family Racing, the 26-year-old was moved into the No. 20 Toyota at JGR for the 2021 season, ousting former prodigy Erik Jones from the program.

Many people raised questions about whether that was the right move for JGR. But Bell extinguished much of those doubts Sunday in the closing laps. The sophomore used fresher tires to zoom past Joey Logano – like Jones, an ex-driver of the JGR No. 20 – for the first victory of his NASCAR Cup Series career.

“This is the happiest moment I’ve had in a very long time,” Bell said. “2020 was one of the hardest seasons I’ve ever had in my racing career. I think I won a race at the Chili Bowl, and that was it for the rest of the year. That’s obviously up against the Cup guys and on the dirt side, too. 2020 was a really, really low point for me.

“To be able to come back in ’21 and win in the Cup Series this early on a road course is something that I’m going to cherish for the rest of my life.”

The victory locks Bell into the playoffs just days into the new season, a feat Jones didn’t accomplish in 26 races last year. To clarify, this column isn’t meant to diss Jones one Bell accomplishment at a time. It is, though, intended to note just how impressive this performance was by Bell, who accumulated finishes of only 21st and 24th in two Cup road course races a year ago.

Bell, driving the No. 95 Toyota last year, ran mid-pack much of 2020 and struggled to find consistency despite occasional strong performances. One of the sport’s hot young prospects, he found plenty of wins charging through the lower ranks of motorsports, whether in dirt midgets, late models, the NASCAR Camping World Truck Series or the NASCAR Xfinity Series. But like some who have stalled out before him, Bell saw that success largely screech to a halt once he hit the big leagues.

“I knew going into the Cup Series it was going to be very difficult, but even on the dirt side I didn’t win outside of January at the Chili Bowl,” he said. “That was very disappointing. You start doubting yourself. You’re wondering if you can do this, if you’re capable of it.”

Bell, though, is persistent and seems to learn from his mistakes. In fact, he pointed to last year’s inaugural race through the Daytona infield as a point of reflection.

“I finished horrible. I got caught up in a bunch of wrecks. I spun out a couple times,” Bell recalled of his 21st-place run last August. “I ran into the back of Kevin Harvick once. We were really fast. I think I had a top-five lap time in the race. We had glimpses of being fast. It just didn’t come together last year.

“Man, I’m glad it came together this year.”

Perhaps most impressively is how Bell claimed the checkered flag Sunday. For much of the middle portion of the race, Bell stalked then-leader Chase Elliott, the series’ most dominant driver on road courses, with wins in each of the past four road course events.

“I’d say that I at least learned where I was good and where he was good at,” Bell said of following Elliott. “I feel like I was pretty competitive with him. We were pretty equal everywhere except a certain part on the racetrack. He was really fast through there.”

Bell then closed it out by chasing down Logano, who was out front by about three seconds. Logano blocked high through the banking of turns 3 and 4 of the oval, but Bell didn’t back down. He completed the pass for the win in the final chicane coming to take the white flag.

Crew chief Adam Stevens, who switched to the No. 20 car over the offseason after six years atop the pit box for Kyle Busch, believed Bell could be competitive at Daytona. But even the head wrench admitted his expectations were exceeded by the time the checkers fell.

“I was honestly hoping for a top five. I thought that was achievable,” Stevens said. “I thought that the [No.] 9 would be good and the [No.] 19 [of Martin Truex Jr.]. I felt we’d be in the mix with probably the next group. We were a little bit better than what I anticipated. We didn’t make many mistakes, took advantage of everybody else’s mistakes.

“But [Bell] was really good in the Cup car at the two road course races last year. Didn’t see it in the finish, but in the lap times, you could see it. What he was doing behind the wheel, he was doing a lot of the right things and learning as the races went on.”

Bell earned every bit of his first career win and, in the process, validated a move by Joe Gibbs Racing that displaced another young talent.

“I’m just very thankful for the opportunity, very grateful for the opportunity,” Bell said. “It’s unbelievable to be here and to be able to win this early. I wouldn’t be in this [No.] 20 car without great partners like Rheem, Stanley Black & Decker, Toyota and TRD as well. Without sponsors, without partners, there is no racing.

Here’s a young open wheel guy who has been racing his ass off to get where he is now. Gotta give credit to Joe Gibbs for giving him such a great opportunity!

Put this kid in anything and he’s a threat to win.

It’s always great to see someone down on his luck, get the opportunity to prove he is still as good as everyone thought he was and pick up win like this.
I love how you allowed all of us to feel young Bell’s emotions in this article. I really felt like I was there with him.