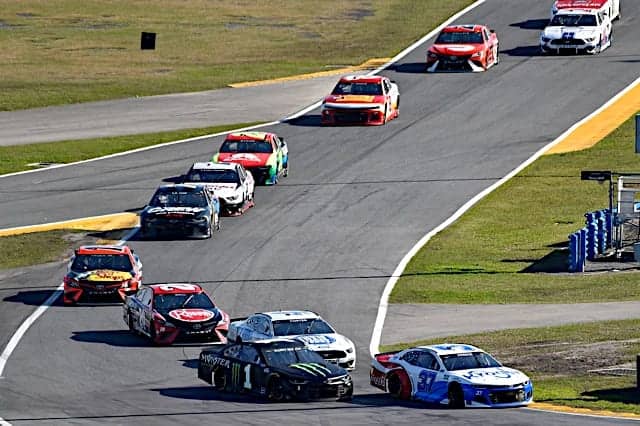 Throughout NASCAR’s history, many racetracks have come and gone. Some have stood the test of time, while others faded away into obscurity after short usage. Coming upon this decade, NASCAR was on a fixed pattern with the racetracks they had at hand. It seemed like no new tracks would get to make their arrival anytime soon.

But, in early 2020, the COVID-19 pandemic radically shook things up. Watkins Glen International was one of the venues whose race weekends were lost due to state restrictions on the pandemic. Thankfully, Daytona International Speedway stepped in and put forth the idea for NASCAR to use its road course to fill this void.

The first race weekend in 2020 showed promise, with plenty of action-packed racing between the three national series’ races. In 2021, the bar has been raised tenfold. In this edition of Frontstretch 5, we’ll go over why this past race weekend shows why Daytona’s road course is the best happy accident that ever could’ve happened to NASCAR.

NASCAR may have not used the road course layout at Daytona until last year, but the circuit has been used by other racing series for decades, such as the IMSA WeatherTech Sportscar Championship and AMA Motorcross Championship. We’ve seen great moments happen before within these racing series that used this layout. So all past events should have served as a precursor to what racing would be like when NASCAR takes its turn at the track.

Even if the circumstances surrounding NASCAR’s arrival to Daytona’s road course were mostly unorthodox, it has given us a fresher look at how these drivers get to race on road courses. Compared to past races at Sonoma Raceway and Watkins Glen, the races from this most recent weekend have quickly shown to be wilder than most of them. We have still yet to witness how the racing at Circuit of the Americas, the Indianapolis Motor Speedway road course and Road America will all turn out, but it’s no question that Daytona’s road course has left a radical impact on road course racing in such a short time frame.

Superspeedways are often regarded as races where the unexpected is most likely to happen. But road courses, especially Daytona’s, have taken the cake on this notion lately.

Who could expect Kurt Busch to miss the kink and spin into the grass from the lead, later coming back to finish fourth? Or Chase Elliott leading 44 laps, only to get spun in turn 6 and fall to 21st at the finish? Or AJ Allmendinger charging back up to finish seventh after suffering a speeding penalty and a flat tire? And that doesn’t even include all of the craziness that occurred during the weekend’s other two events.

Even though Daytona was just the second race on the calendar and had no real negative playoff implications, there’s no doubt that the excitement was still there. We can only imagine how Daytona’s road course might be when there are playoff implications on the line. Thankfully, that’s what we have the Charlotte Motor Speedway ROVAL for. The excitement factor hasn’t failed for us there yet.

Another spectacle we saw from the three races this past weekend was the rougher, edgier, short-track style of racing from the competition. Whether it was bumps, spins, fender-bending hits or even high-speed lawn work, the fans got to see it all.

Turn 1 gathered a long list of victims throughout the weekend, typically from drivers overshooting its braking zone and causing havoc. Sometimes, incidents would start from there and would continue all the way to turn 3’s right-handed horseshoe turn. Some drivers would have their races get away from them in turn 6, or even way over in the frontstretch chicane.

Rarely ever have we seen these elements of short-track racing displayed in past road course events. Considering how abundantly this occurred and how masterfully it was executed, it can be something new for fans to get acquainted with when NASCAR revisits this grand gem of a road course.

Not only was the racing memorable, but the wins were too. Ben Rhodes became the third Camping World Truck Series driver to open the season with back-to-back wins, along with helping Toyota score their 200th series win as a manufacturer. 18-year-old Ty Gibbs then captured an incredible debut win in the NASCAR Xfinity Series event. Finally, the weekend was capped off with Christopher Bell taking home his first-ever NASCAR Cup Series win.

While these wins by Rhodes, Gibbs and Bell are all special in their own right, they all share one form of common ground: nobody expected them to emerge as true road course experts. Before this past weekend, Rhodes only had one top five and two top 10s on road courses. Bell had one road course win (Road America in NXS, 2019), but has never been regarded as a driver who would excel on these tracks so well.

Only time will tell how these drivers will fare in future road course events. But, from the nature of their wins, they’re certainly in the running to become road course aces later on in their careers.

With NASCAR’s plan of expanded visits to road courses for the 2021 schedule, along with the record-high TV ratings for a road course that were delivered on Sunday, this past race weekend at Daytona all but solidified the notion of this being a good plan for NASCAR going forward. It’s a good look for nearly everyone involved. Drivers get to be put to the test more, while fans at home or attending the facility can enjoy the intense on-track action from all viewpoints.

Even if NASCAR wasn’t originally mining for it, they have struck a boulder of gold with the addition of Daytona’s road course to their lineup of tracks. From the way the last two events at the facility turned out, the worth of this gold certainly looks to be substantially more valuable.

I enjoyed the race from a pure entertainment standpoint, but a large amount of that is because NASCAR blatantly threw the “rain” yellow to create such drama. Recent news of Nascar refusing to use a local yellow means manipulation will continue to happen for TV purposes.

The layout does offer a fresh excitement, but I wonder if the pendulum has swung to far to one extreme with so many RC races added.

Time will tell, but chaos is always entertaining!